F2 points leader Norris collided with the barriers at the second part of the Swimming Pool section while on a flying lap in qualifying.

In a session split into two sections, Norris looked the favourite for pole in the first before the incident - which bent his Carlin car's steering and broke the front wing.

"The car was good enough for pole," said the 18-year-old Briton.

"It's a costly mistake and it kind of ruins the whole weekend.

"Anything can happen here in Monaco, so we'll just keep working and try to maximise what we get from those two races."

The problem centred around taking too much speed through the Swimming Pool section, which he claims he took "flat".

"I went out and got a good warm-up in, didn't have any traffic and all was looking good," Norris added.

"Sector one and sector two were pretty decent, but then, because I went flat in the Swimming Pool section, I had to shift up a gear which I hadn't done in the whole of the previous session.

"I went into the next one and you're just pushing a tiny bit more, and I just couldn't get the second downshift done in time."

The lack of another downshift robbed the car of engine braking, sending it wide with oversteer on the exit and into the wall.

Norris was then given a three-place penalty for impeding eventual polesitter Alexander Albon as he recovered back to the pits in his damaged car, which will leave him 18th on the grid.

Arden driver Maxi Gunther was also given a post-qualifying penalty. He had been set for sixth on the grid but had his times disallowed for missing the weighbridge so will start from the pitlane. 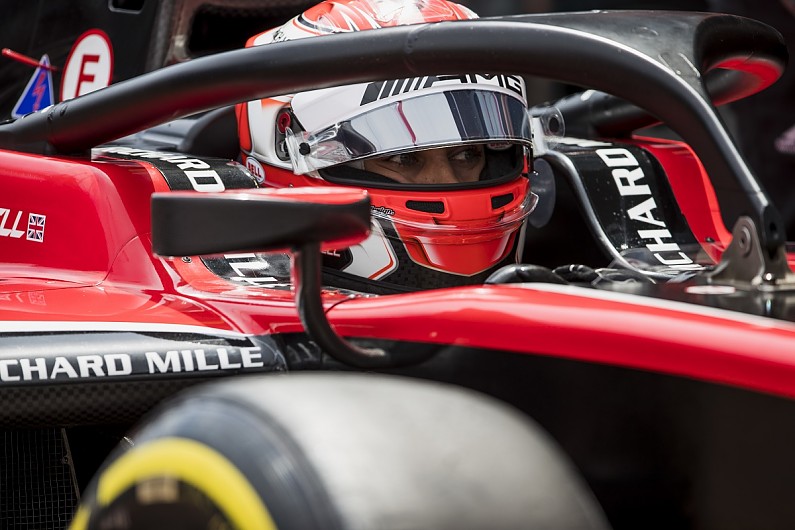 Barcelona feature race winner George Russell will attempt an off-sync strategy in a bid to recover from starting Friday's race in 17th.

The Briton - third in the F2 standings - managed just four flying laps of the track in total over practice and qualifying, as his engine expired in the opening session.

"Strategy is going to be interesting, we'll either have to go extremely long or extremely short," said the ART Grand Prix driver, who added that a further car problem cost him on his fastest qualifying run.

"There's an issue with the car, the idle is set too high, so if you get the hairpin wrong, you get the idle and it just pushes forwards.

"I must have lost six tenths on my best lap.

"I genuinely feel like I could have been top three in that group.

"Every lap I was improving by at least a second a lap."