Toto Wolff believes the decision not to penalise Max Verstappen for his Turn 4 defence against Formula 1 title rival Lewis Hamilton was “laughable”.

Verstappen found himself in a wheel-to-wheel battle with Hamilton after the Mercedes driver managed to recover from 10th place on the grid to sit second behind his Red Bull rival.

Hamilton managed to catch Verstappen and line up a pass on lap 48 around the outside at Turn 4, only for both drivers to run off-track under braking.

Hamilton called the move “crazy” over the radio, but while race control noted the incident, they opted against asking the stewards to investigate it.

Verstappen would ultimately lose out to Hamilton after being passed at the same corner 11 laps later, seeing his championship lead fall to 14 points with three races to go.

Speaking to the written media after the race, Mercedes F1 boss Wolff noted how the “whole weekend went against us” amid the various rulings, notably Hamilton’s exclusion from qualifying on Friday.

“We had a broken part on our rear wing which we couldn’t look at, couldn’t analyse, failed the test, and after disqualified, very harsh,” Wolff said.

“And then you see on the Red Bull repairs, three times in a row on a rear wing whilst being in parc ferme with no consequence.

“That’s one thing, and obviously that really peaked with the decision in the race, which was, I mean, really wrong defence from Max, absolutely an inch over the limit, but he needed to do that to defend.

“Lewis just managed it even more brilliantly by avoiding the contact and end the race that way.

“But that was just over the line, it should have been a five-second penalty at least. Probably Max knew that. Just brushing it under the carpet, it’s just the tip of the iceberg. 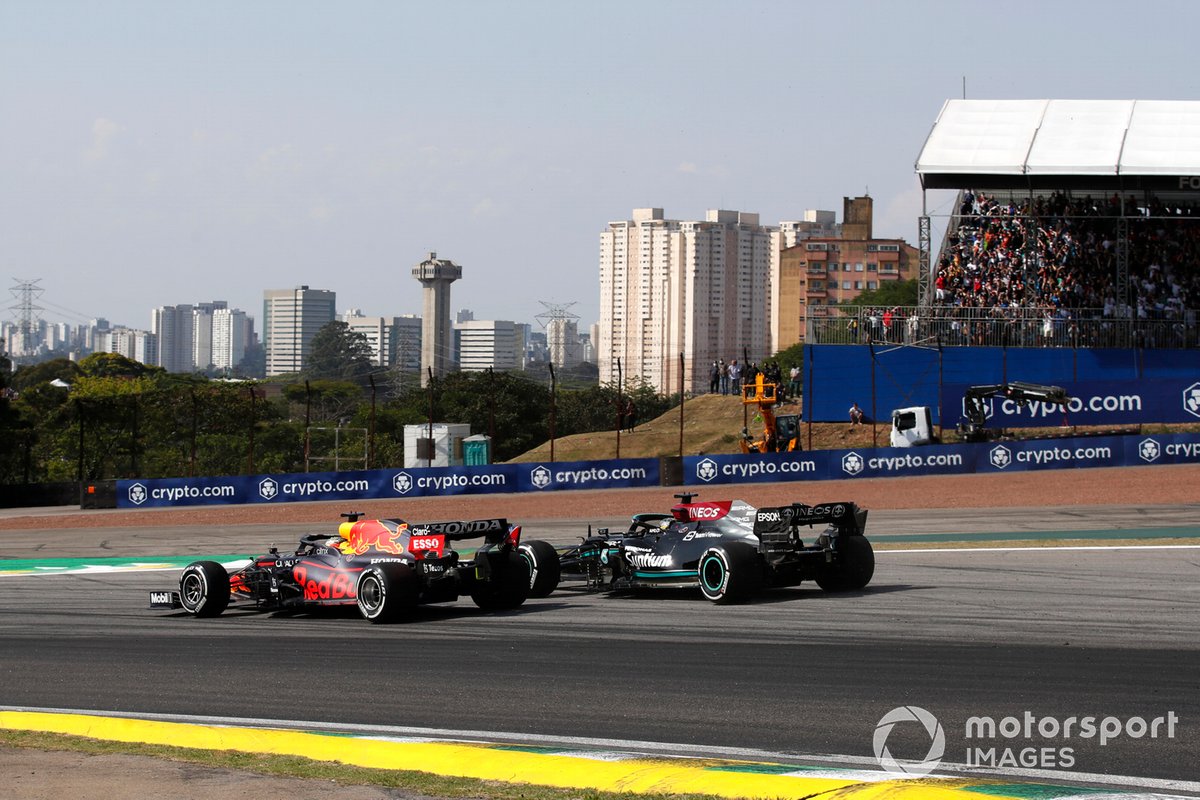 It marked another setback for Mercedes in its fight against Red Bull over the Brazil weekend, having seen Hamilton get excluded from qualifying after the DRS on his rear wing failed a post-session technical check.

Talking about the Turn 4 move after the race, Hamilton said he “knew that was the decision they would come to, whether it was right or wrong”, but that he didn’t want to get into whether it was fair or not, saying: “It doesn’t really matter, I got the result I needed.”

Asked by Autosport what he thought the decision would have been had Hamilton made the move on Verstappen, Wolff said: “I don’t want to claim anything on the stewards.

“I think they have a difficult life anyway. And they are only there to lose, whatever decision they take, one team is going to be grumpy. In that respect, I don’t want to be in this chair.

“But in a certain way, when you’re taking punches all weekend, and then you have such a situation on top of everything, you’re just losing faith in a way.”

Wolff said that while he was all in favour of hard racing between drivers, the rules had to be applied consistently.

"Whatever is in the director’s notes, we’re going to accept,” Wolff said.

“I’m also OK if the director’s notes are going to be shredded and we just race hard like we did today, fine.

“But if the director’s notes say that you cannot push anybody off the track in Mexico, and then obviously that’s valid here too, and then you’re actually being driven off the track, it’s just not very consistent.

“My discussion with the race director was not broadcasted, but my reaction was. We feel we’ll discuss it behind closed doors.”

Hamilton is now facing a fresh post-race investigation by the stewards for undoing his seatbelts on the cool-down lap to collect a Brazilian flag from one of the nearby marshals.