Williams 'will be reimbursed' by Baku circuit for manhole hit damage

Russell's chassis had to be sent back to the Williams factory after it ran over the grid cover, which dislodged as the Williams went over it and fired into the underneath of the car in opening free practice.

Following meetings over the weekend between deputy team principal Claire Williams and Baku F1 chiefs, it has now been confirmed that the outfit will get an insurance payout as soon as possible.

Arif Rahimov, the promoter of the Azerbaijan GP, said he was pushing for the matter to be sorted swiftly after apologising to Williams for what happened.

"Obviously this is our fault, we did admit it," Rahimov told Autosport about the outcome of the meeting he had with Williams.

"It's something that we as a circuit shouldn't have allowed.

"We have checked again our insurance policy and it is fully covered.

"Obviously there are no hard feelings, as we both understand that it was never meant to be and it was definitely not on purpose.

"We were very apologetic and we also sent some flowers to say we were really sorry about what happened." 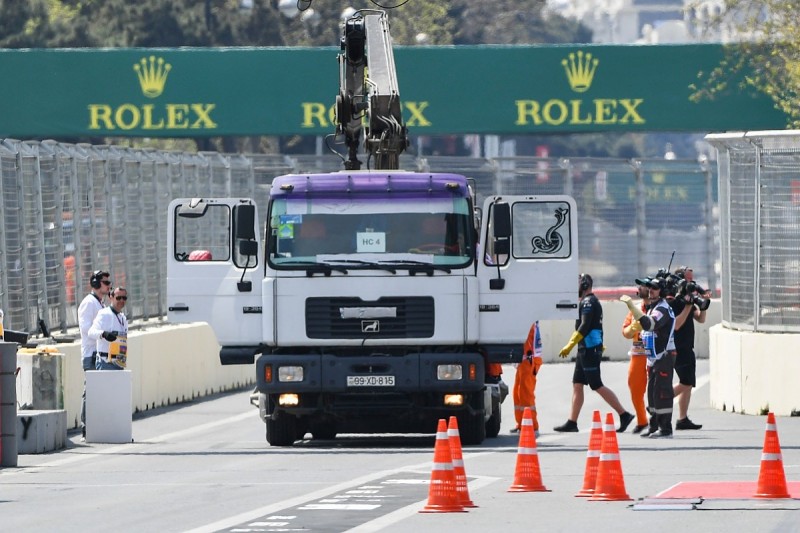 While Haas had to wait almost a year to get a payout from Sepang over a drain incident at the 2017 Malaysian Grand Prix, Rahimov is eager for the Williams situation to be sorted out in a much shorter timeframe.

"We have mentioned this to Williams," he explained.

"We spoke to the insurance company [that] we need to make sure this happens as soon as possible, not [in] a year, because they need this money so they can use it this season.

"We will push the insurance company to expedite the claim and pay Williams as soon as possible."

The Russell incident forced opening practice to be abandoned while further checks on all other drain covers were completed, and new procedures were put in place to ensure there could be no repeat incident.

Rahimov added: "We started checking all the manholes and all the drains twice per day: once in the evening after all the racing was finished and once early in the morning before the curfew and before the cars went out on the track.

"We had several teams going around the track checking each of the 300 plus manholes and drains, so we've definitely taken it more seriously.

"We will definitely make sure that this never happens again."

The unloved car that nearly cost Senna a title