George Russell says his Williams Formula 1 team discovered an issue with his car that contributed to his struggles in the Portuguese Grand Prix.

Russell put in his best qualifying performance of his Williams career thus far in earning 11th on the grid, but in what he called "a race of survival" he slipped back to eventually finish 16th at Portimao.

Russell also pointed out that his 11th place in qualifying flattered the true form of the Williams package, as several drivers from midfield teams underperformed, and the FW43B was actually only the eighth fastest car.

Thus it was not a surprise when he was passed by quicker cars in the race.

“We did find there was a small issue on the rear of the car, which definitely did not help things on Sunday,” Russell said in Barcelona on Thursday.

“But I think we are fighting for this eighth and ninth position in the constructors', that's roughly where the pace of the car is.

"And I think it is worth remembering that we were the eighth quickest car on Saturday, even though we qualified 11th there was a lot of very fast drivers who were behind us.

“That doesn't take anything away from a very difficult Sunday in very tricky conditions. And we still need to work on improving that.

"But it must be remembered that there were Ricciardo, Alonso. Stroll who are often fighting for that Q3 spot well behind us, and out in Q1 and the start of Q2.

“So we need to keep on improving, we need to make a more drivable car, less sensitive, so Nicholas [Latifi] and I can really push it to its limits, because that was very difficult in the race on Sunday.” 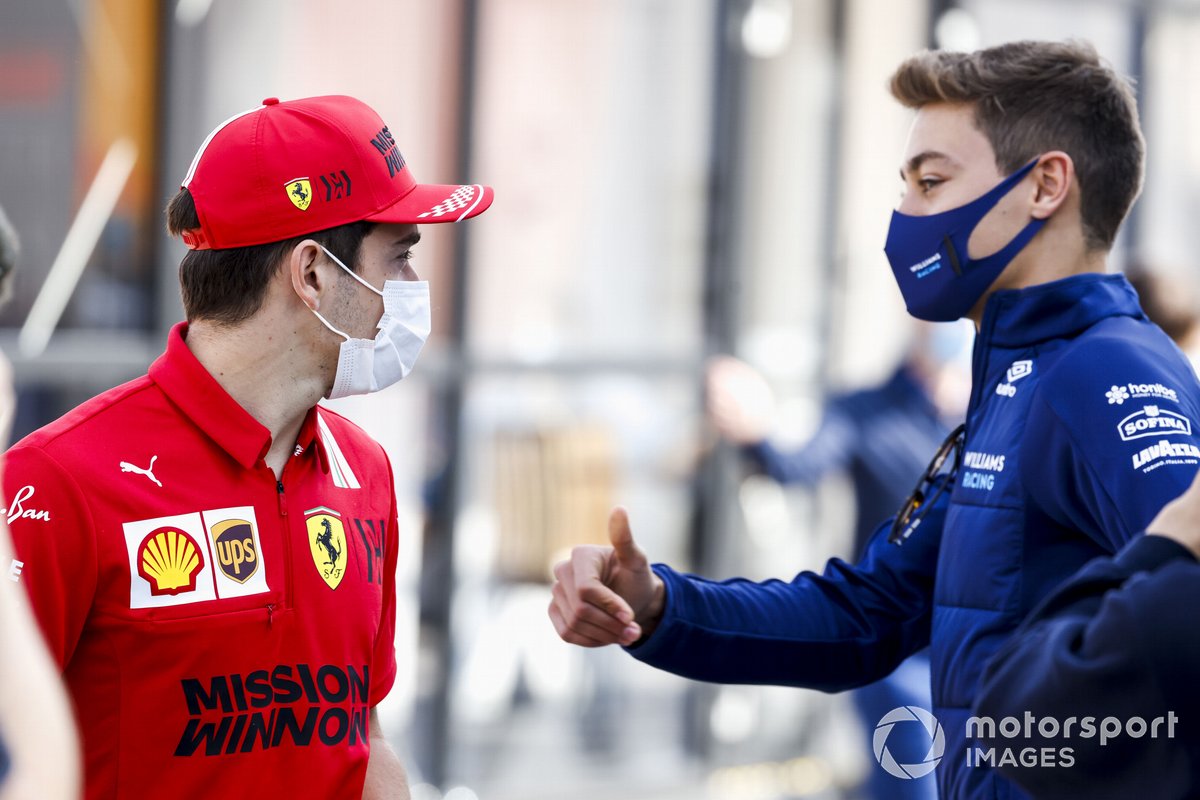 Charles Leclerc, Ferrari and George Russell, Williams in the paddock

Russell says that his team has been getting everything right in qualifying, when rivals haven’t always done so.

“I think as a team, we do a great job at optimising it to be honest,” he explained.

“I think, as we just touched on, there were a few people who didn't optimise their packages. As we said, we were still only the eighth fastest car and team in qualifying.

“But that translated to P11 on the grid. So we just did a really good job at maximising the tyres, maximising the traffic management and the lap, which is really important.

"And when you get into Sunday's race, and you have 60-odd laps to get into the rhythm, sort of feel at one with the car, I think the true pace of everybody's package comes out.

“But we need to continue on these positives from Saturday and try and implement them more onto Sunday.”

Russell also noted that the race form of Williams has on occasion been impacted by windy conditions, something that the car is particularly sensitive to, and which have contributed to a disparity between qualifying and race form.

“I think Imola was a great example of where the car was working very well in qualifying and in the race, we were in 10th position, chasing the Mercedes [Valtteri Bottas] and going for an overtake for P9 on pure pace and pure merit, I think.

“We have had two out of three races now work has been quite gusty, unnaturally gusty and windy.

"And I guess we need to get fortunate. But as it is in racing and in life, you make your own luck.

“So we need to see how we get on, and still give it a few more races to get a true baseline of where we think realistically we can fizzle out of this season.”