Nicholas Latifi says his Williams Formula 1 car was "the best it's ever felt" during the Russian GP, despite his race being compromised by a grid penalty.

The Canadian had a power unit change prior to qualifying after suffering an issue on Friday, and thus started 18th, just ahead of the also-penalised Valtteri Bottas and Max Verstappen.

In his first stint on the medium tyres, he got caught behind the Haas of Nikita Mazepin but, after an early switch to the hards to find clear air, he showed good pace.

However, by then he was too far behind the rest of the pack to make much progress.

His afternoon ended when he spun on slicks in the rain and was obliged to retire with wing damage.

"The race came on undone behind Mazepin, just not being able to get by him," Latifi told Autosport.

"It was a shame because on the prime stint the car felt the best it's ever felt in the two years I've been with the team.

"It's quite surprising, but it makes it more frustrating that this was a race where we had to start where we did. I was flying at the end, and it's just unfortunate we weren't in the mix."

Latifi also showed good pace in the wet in Q1, but he didn't do a flying lap in Q2 because of the grid penalty.

He then had to watch with frustration as team mate Russell took a sensational third place after switching to slicks at the end of Q3.

"Obviously seeing what he did shows the potential that could have been," said Latifi. "But also what I did in Q1. I was for whatever reason flying in Q1. 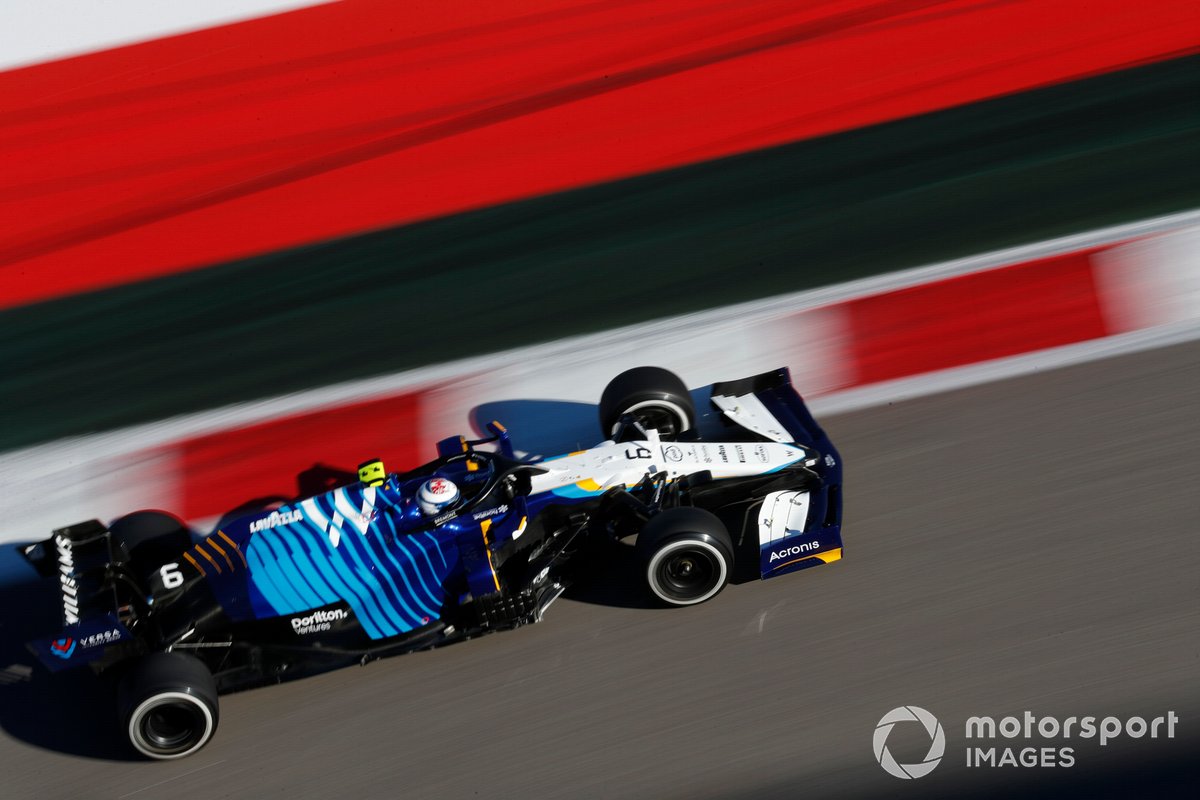 "I set a laptime in the middle of the session when the track was still wet that went P6 at the time, and that still good enough to stay P10 when when everyone else was improving at the end of the dry track.

"I felt quick, and it would have been nice to see what we could have done. If I did my job Q3 was easily on the cards, and then we saw how Q3 ended up, and obviously when we're in that position you have nothing to lose so you can take the risks.

"That's how it goes sometimes. It's frustrating for sure, but that's racing, and I'm sure we'll get more opportunities, because the pace is consistently there now. So if it's consistently there, it'll be there to take advantage of something one time or another."

Latifi, who was recently confirmed by the team for 2022, has shown increasingly impressive form as his second F1 season has played out.

"The main thing is the consistency, because even last year there were periods or flashes where the pace could be there, it just maybe it wasn't always in qualifying, or was in the race.

"It's coming together more consistently which definitely brings confidence, and then just for different reasons on each of the past races there have been things out of my control that have put me back.

"But it's been nice to be in the mix in those races as well, and like I said if I keep doing my job properly we keep working well with the team then there will be more opportunities like that, because it's coming now."