In the latest of our series of races picked out by Autosport journalists, we revisit the 1990 Mexican Grand Prix. A race that had it all in an era that did too, it also featured one of Formula 1's most-famous passing moves

What do you look for in a great race? When judging a series or championship, I start with three main criteria: the quality of the drivers, the level of wheel-to-wheel racing and the cars - are they good to watch when being hustled around on their own?

Considering those elements helps to explain why my favourite race is the 1990 Mexican Grand Prix.

Firstly, the field was top class. The 26 starters would ultimately rack up a total of 172 world championship Formula 1 wins and 11 titles, and included Nigel Mansell, Alain Prost and Ayrton Senna.

Secondly, the cars. It is of course entirely subjective, but there's something appealing about the look of early 1990s F1 machines. Wide and low, with fairly fat slick tyres, they had relatively simple aerodynamic packages -before the arrival of unsightly bargeboards and myriad extremely-clever-but-way-too-finicky-looking flicks and winglets. They looked different and sounded good, too.

This was also a time when F1 drivers had access to different tyre compounds (but no obligation to use two types) and no refuelling.

McLaren's F1 domination was finally being challenged in 1990, largely by Ferrari and Williams. Gerhard Berger qualified on pole for McLaren and was separated from team-mate Senna by Riccardo Patrese's Williams, while Ferrari's Mansell lined up fourth.

The early laps of the race, however, suggested that Ron Dennis's team would repeat the success it had scored at the Mexico City venue for the previous two years. Although Patrese grabbed the lead, Senna powered to the front as they went down the main straight to start lap two of 69 and Berger followed through into the first chicane. 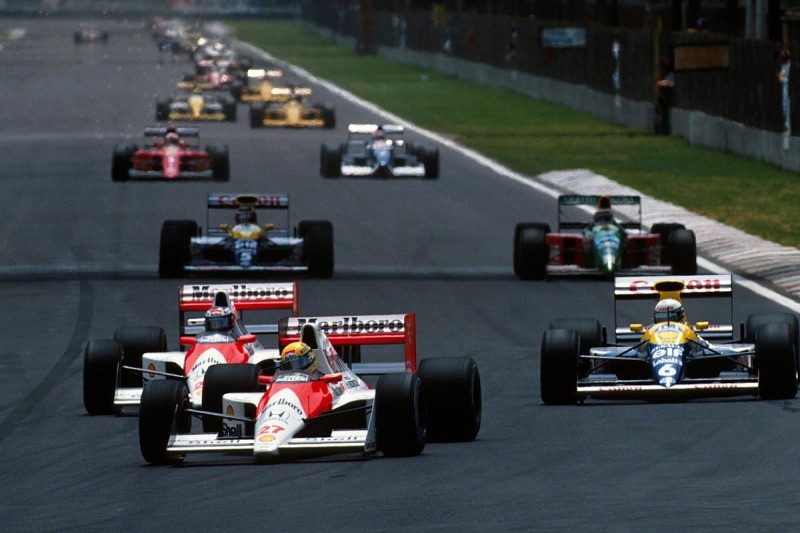 The MP4/5Bs quickly pulled away, with Berger initially holding onto Senna before starting to suffer with tyre problems and falling back. "It looks as though the McLarens, once again, are going to be invincible," said Murray Walker on the BBC's race commentary.

The first suggestion that this wasn't going to be as expected came on lap 13, when Berger pitted for fresh rubber and fell to 12th. He now started a recovery drive.

The second was Prost's progress. He had qualified his purposeful-looking Ferrari 641 only 13th and had completed the first lap in that position too, but after that he'd systematically picked people off. When Berger stopped, Prost moved into sixth.

"The car was not very comfortable through the fast corner [Peraltada]," said Prost. "But as the fuel load came down the car was better and better. I knew that I had to wait."

By this stage, Senna led triple world champion Nelson Piquet (Benetton) by more than 14s, but Prost was lapping faster than anyone. He closed on team-mate Mansell, himself on a charge after dropping from fourth to seventh in the early stages.

Both Ferrari drivers started challenging the Williams cars of Thierry Boutsen and Patrese. The Ferrari had arguably the best chassis in the field, but the V12 was not as powerful as the McLaren-Hondas and Williams-Renaults, so Mansell and Prost had to work hard to climb further - the cars moving around and sparking on the bumpy circuit.

At the start of lap 22, Mansell managed to stay close enough in the tow down the long main straight to dive inside Patrese into the first chicane and set off after Boutsen. Patrese defended hard from Prost, and Mansell had actually caught and overcome Boutsen - around the outside at the first chicane - to move into third before the reigning world champion found a way through to fifth. 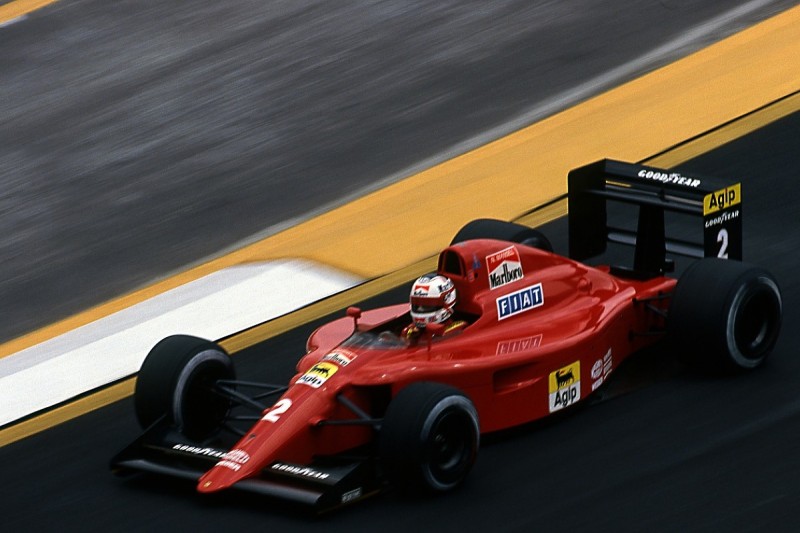 By the time he did, on lap 26, Prost had Alessandro Nannini's Benetton filling his mirrors, such was the competitiveness of the top four teams. Prost then caught and overtook Boutsen on lap 31, by which time he was 24s behind Senna and seven behind third-placed Mansell.

In clear air, the two Ferraris were the fastest cars on the circuit and Mansell arrived on Piquet's gearbox around half-distance.

Mansell neatly outbraked the (let's be honest, quite ugly) Benetton into the first chicane on lap 37. At this stage, he looked like the most likely challenger to Senna, although the gap to the McLaren was 18s. Prost followed five laps later, Senna's lead over Mansell still being 18s, with Prost more than six behind his team-mate.

Prost again became the fastest driver on the circuit, despite Berger's charge through the field on fresher rubber, and the top three gradually closed up. Senna started to struggle with his tyres, but the decision was made to stay out, providing a very clear target for the Ferrari duo and promising an exciting finish.

At the end of lap 54, Prost got a run on Mansell in traffic. The Briton moved over to defend the inside, but left enough room for the Frenchman to move into second. The gap to Senna was now under 10s, while almost at the same moment the recovering Berger passed Boutsen for fifth.

With Senna nursing a slow puncture and now not far enough ahead to warrant a pitstop, Prost became the favourite to take victory. Senna defended when Prost arrived on his tail, allowing Mansell to join the fight for the lead, but the French driver moved ahead on the inside of the first chicane with just nine laps to go.

Mansell followed into second place next time through, but the drama was far from over. On lap 64, almost simultaneously, Mansell spun and Senna's right-rear tyre finally gave up. It was poor reward for a drive that only hindsight could seriously have improved. 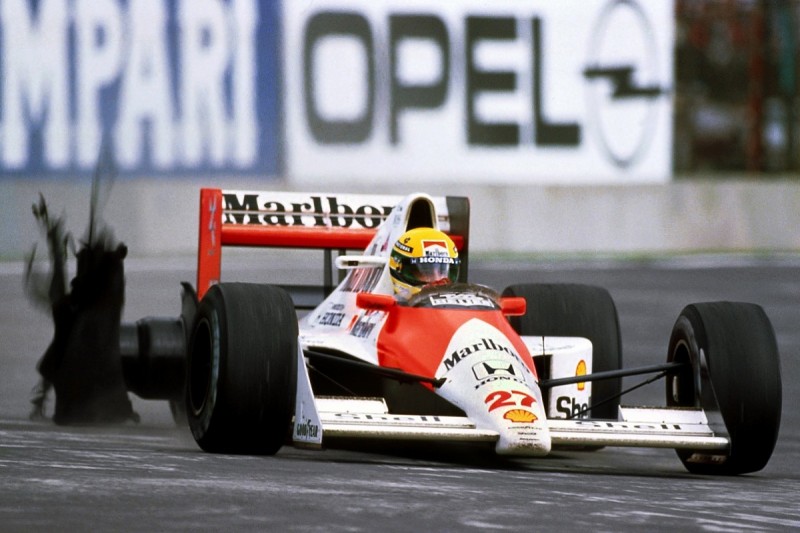 That brought Berger into contention for second and between the end of laps 64 and 66 the Austrian closed the 7s gap to Mansell.

At the start of lap 67, he outrageously lunged down the inside of the Ferrari into the first chicane, locking a wheel, and barged Mansell aside. Given his rubber advantage and previous pace, Berger should have been set for second, but now Mansell was, in his own words, "absolutely furious".

There had been plenty of battling and passing throughout the race, but the final seal on this as a great GP was Mansell's response to Berger's barge.

He hung onto the McLaren and harried Berger all the way round the penultimate lap, forcing small errors, before unbelievably sweeping around the outside through the high-speed, banked Peraltada right-hander - described by Autosport at the time as "one of the most challenging turns to be found in F1" - in one of motorsport's greatest overtaking moves. He then held off Berger to secure second by 0.179s.

The 1990 Mexican GP had one of the most incredible overtaking moves in F1 history, the greatest drive by one of motorsport's true legends, and tension right to the end

Mansell did not believe it was one of his better passes because of the high risk. "That was one of my worst-ever overtakes, because it was what I call a totally shit-or-bust move!" he told Autosport in 2014. "It wasn't a clever one, because if anyone had really got hurt, it would have been me, because I was on the outside.

"It's not the place to go off, because it's a very dangerous corner. But it was fantastic. It was just, 'He's not going to do this to me', and I was very indignant about it."

It was a brilliant piece of drama from Mansell, just the sort of driving that made him so entertaining to watch. And yet he had finished 25s behind his victorious team-mate. Prost was sometimes criticised for not being exciting enough on-track, but it was a sublime performance that had taken him from 13th on the grid to his 41st GP victory, and with the backdrop of the ongoing Senna feud after their Japanese GP clash the previous year. 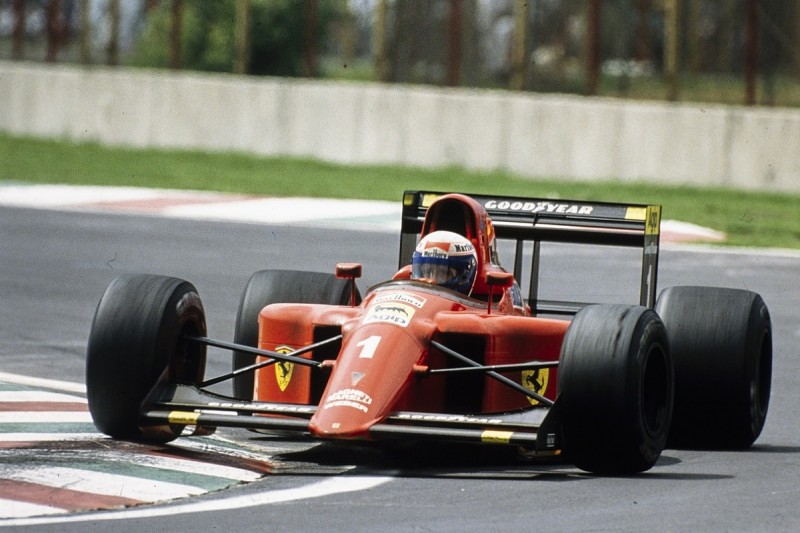 It was also the drive he picked out when asked to select the race of his life in 2010. "I decided to run with less downforce," said Prost. "This asked a little bit less of the tyres and gave good speed on the straight. The race was perfect. The good thing was that I overtook everybody. Nobody stopped because of reliability problems."

"It was a tremendous race," said Mansell at the time and Autosport's conclusion was that: "You can't argue with that."

When you watch a top-level sporting event, you want to see the best exponents deliver their finest performances, combined with some drama. And the 1990 Mexican GP had one of the most incredible overtaking moves in F1 history, the greatest drive by one of motorsport's true legends, and tension right to the end.

It's what I hope for every time I prepare to watch another motor race. 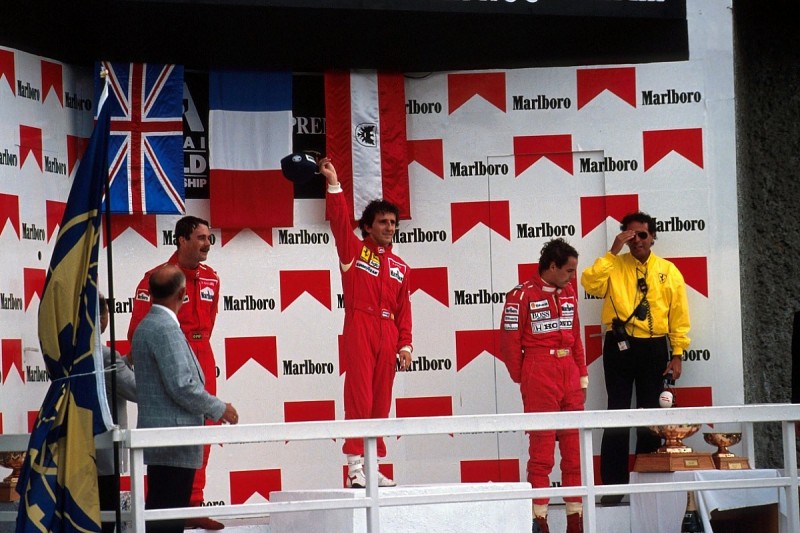