An all-out battle for the lead between two screaming V10-powered cars, unspoiled by DRS, using different tyre brands and ending in a controversial on-track incident. A fascinating tactical battle in which motorsport's greatest strategist is unable to influence proceedings and a thinly-veiled team order enacted on the final corner of the race. Oh, and an Arrows (briefly) in the lead battle for good measure.

Looking back at the 2001 Austrian Grand Prix that kickstarted my obsession with motorsport as a precocious seven year-old, it's apparent that I couldn't have picked a much better first race to watch if I'd tried.

In the years since, both as a fan and as a very fortunate member of the media, there have been many races that I've enjoyed greatly.

The 2003 Australian GP and 2012 Brazilian GP deserve mention, but the mix of action, controversy and nostalgia factor mean for me the 71 laps of the A1-Ring on 13 May 2001 have yet to be toppled.

David Coulthard came through from a lowly seventh on the grid to win for McLaren after outfoxing Ferrari's Rubens Barrichello, who was then ordered aside by team boss Jean Todt to aid team-mate Michael Schumacher's title prospects.

At that point in the season, Coulthard was only four points behind the then-three times world champion. So unlike the infamous team order at the same venue a year later in 2002 - when Barrichello was ordered to give up victory - there was at least reasonable grounds for Ferrari to shuffle its cars around, even if six races into a 17-race season is still uncomfortably early to be interfering in the outcome. 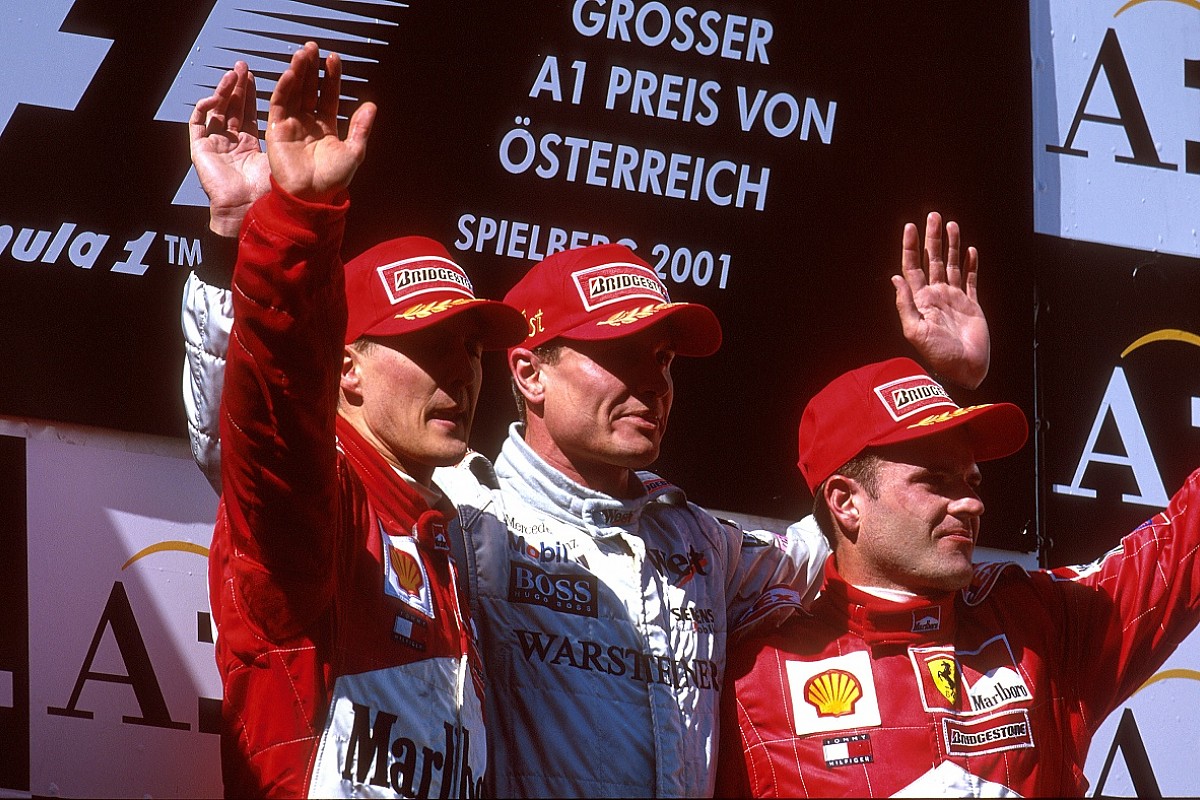 But all that was by-the-by for me, happily watching the Jim Rosenthal-fronted ITV coverage. By some coincidence, my mum used the same Reading-based chiropractor as F1 rookie Juan Pablo Montoya (as did sometime F3000 race-winner Jamie Davies), and one day came home with a signed picture. That was enough to decide my allegiance in favour of the Williams-BMW driver.

Montoya had properly announced himself to F1 the previous month in Brazil, by muscling past Schumacher in a forceful pass for the lead following a safety car restart. In only his third GP, he promptly cleared off into the distance, only to be rear-ended while lapping Jos Verstappen's Arrows.

Coulthard ran fifth in the early laps until he was passed by a flying Jos Verstappen, Max's dad making full use of a light fuel load to charge his two-stopping Arrows up from 16th

Reliability problems meant Montoya only made the finish for the first time in the Spanish GP at Barcelona, the race before Austria, where he followed Schumacher home in second after race leader Mika Hakkinen's engine cried enough on the final lap.

Returning to the scene of his Formula 3000 victory in 1997 in Austria, Montoya qualified on the front row ahead of Williams team-mate Ralf Schumacher for the first time, and only behind polesitter Michael Schumacher's Ferrari. He then got the best start and led away from his team-mate, while the elder Schumacher brother led Ferrari's chase in third, ahead of Barrichello.

The advent of traction control, reintroduced at the previous race where Coulthard had stalled on the grid, had immediately shaken up the order behind them. The luckless Hakkinen was one of four drivers rooted to the spot as the lights went out, joined by three others - Nick Heidfeld's Sauber and the Jordans of Jarno Trulli and Heinz-Harald Frentzen.

Coulthard, who had struggled for balance in qualifying, immediately gained two places at the expense of Trulli and Heidfeld, and ran fifth in the early laps until he was passed by a flying Verstappen, Max's dad making full use of a light fuel load to charge his two-stopping Arrows up from 16th. 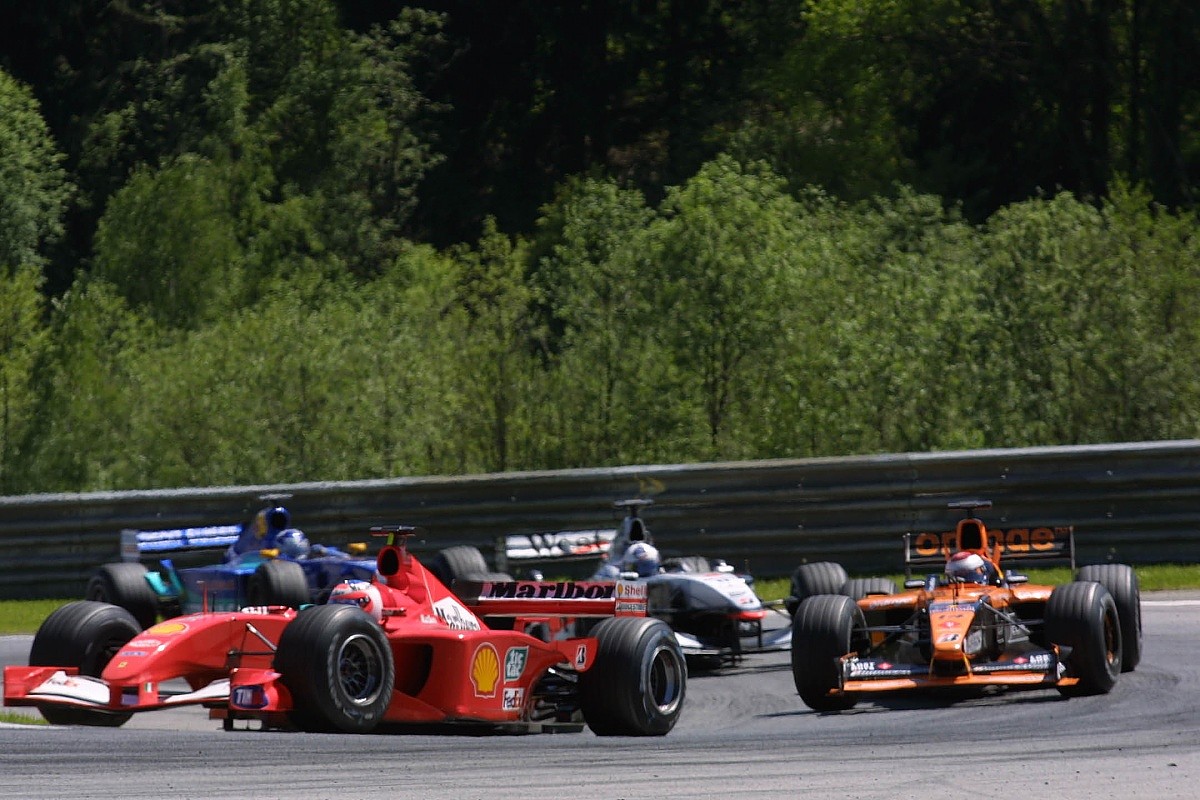 When Ralf Schumacher was forced out by brake problems on lap 10, Montoya's buffer to the Ferraris disappeared and with his Michelin rubber graining at a faster rate than the Bridgestones on the Ferraris, the Colombian began to come under stern pressure.

One of the problems with current F1 - in this writer's opinion - is that a driver facing a massive tyre offset is essentially a sitting duck when the driver behind gets within DRS range. Yes, it means that we sometimes get overtaking aplenty and faster drivers' races (or championships, in the case of Fernando Alonso at the 2010 Abu Dhabi GP, the last pre-DRS GP) aren't ruined by getting stuck in slower traffic.

But it effectively means the defending driver has little choice but to accept the inevitable. Fighting for a position they will lose in three corners time will only damage their tyres more. You can call that pragmatism, but I like to see a driver work to earn their overtake.

Montoya was certainly in no mood to make it easy for Schumacher, and his defiant refusal to cede position into Turn 2 on lap 16 would prove the turning point of the race, and prevented it from becoming one of the many largely forgettable Schumacher victories that seem to merge together. To my impressionable young mind, it was a heroic act - even if it would ultimately compromise Montoya's race just as much as Schumacher's.

Losing out in every traction zone, Montoya had to drive inch-perfectly to keep his Williams ahead, and was largely succeeding until Schumacher out-dragged him on the uphill climb towards the Turn 2 hairpin. But crucially, the Ferrari hadn't managed to claim the corner, and left an inviting gap that Montoya couldn't resist.

Somewhat predictably, the Williams locked up and went straight on, taking Schumacher with him into the gravel - much to the German's disdain - and opened the door for Barrichello to lead from a soon-to-pit Verstappen and Coulthard. 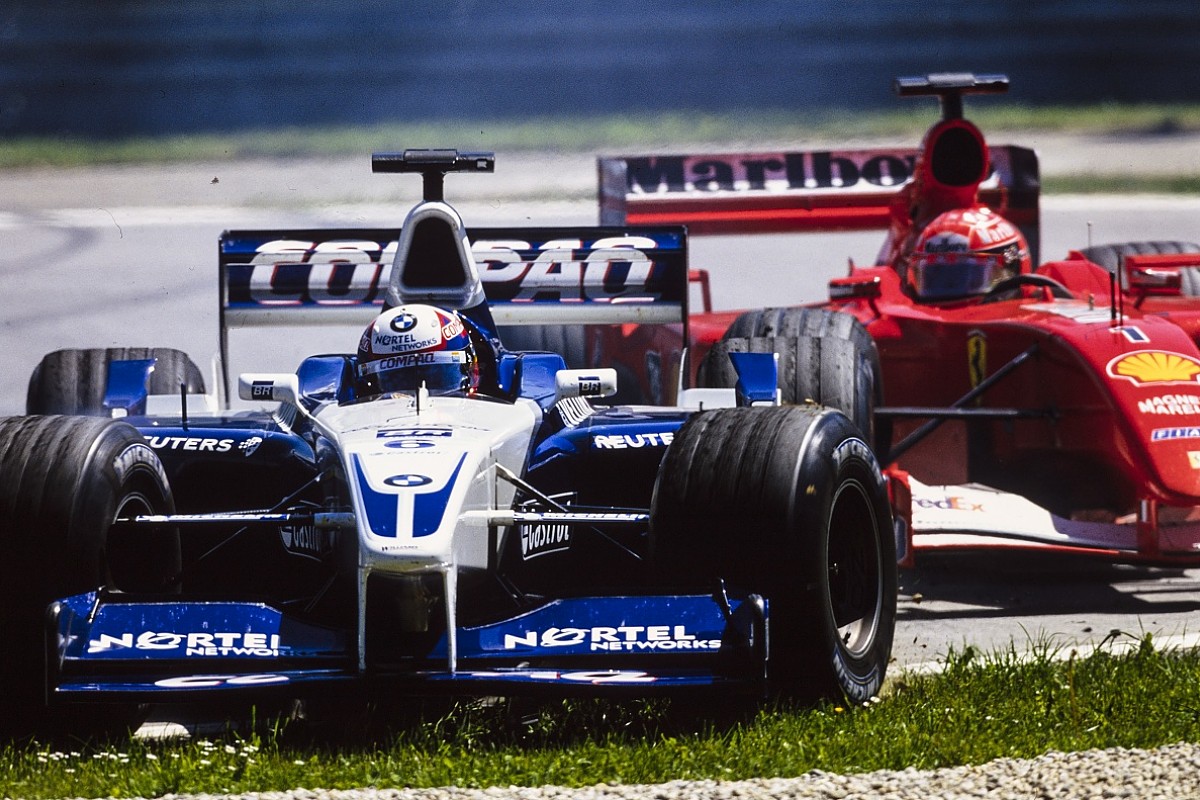 "The fight had been fair until the incident," Schumacher said afterwards.

"Then he tried to take me out at the corner and I had to go on the grass, because I could not turn in on him. He was not looking where he was going, he was looking where I was going."

"I think it was one of my best races. Unfortunately, David was able to go a bit further than me before pitting and that paid off for him" Rubens Barrichello

Montoya meanwhile was unapologetic: "What happened with Michael was just a racing incident," he said. "He braked quite late, I braked late as well, I locked the rear tyres and ran wide."

Schumacher quickly recovered to third, passing Olivier Panis' BAR and the sole remaining Sauber of Kimi Raikkonen, but was unable to extend his first stint beyond lap 46 and was the first of the leading trio to pit. That left Barrichello and Coulthard alone out on track.

With Ross Brawn in the red corner on the pitwall, Barrichello ought to have been in the pound seat, but he couldn't go beyond lap 47 and left the way clear for Coulthard to push on.

Coulthard set the fastest lap of the race on lap 48 - only half a second off his qualifying time - and after pitting on lap 50, re-emerged 1.3s clear of a disappointed Barrichello, whose hopes of a second GP win had all but evaporated.

Coulthard managed the gap expertly in the closing 20 laps and with his victory hopes diminishing, Ferrari gave Barrichello a reminder of his standing in the team by ordering him to move aside for Schumacher. 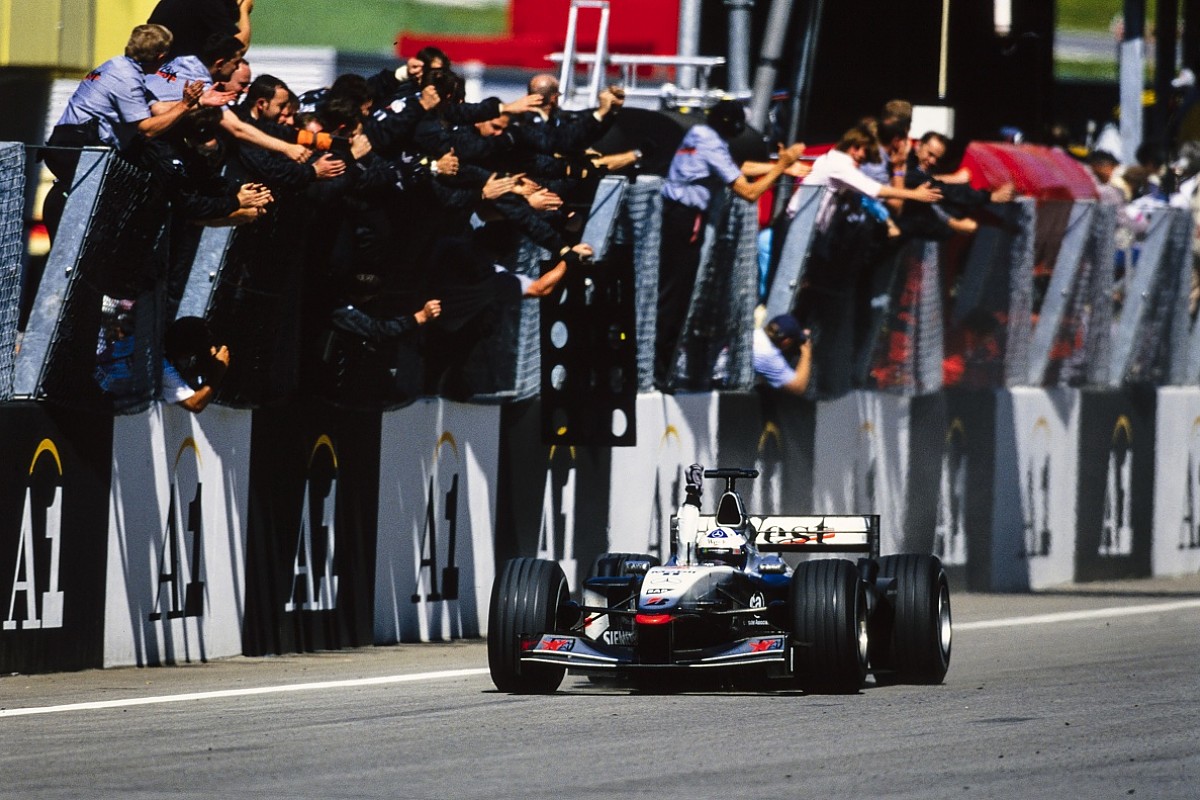 After much persuasion, Barrichello eventually complied exiting the final corner - adding insult to injury after losing out on a race he could have won.

"I moved over for Michael, because the team asked me to," he said. "I think it was one of my best races. Unfortunately, David was able to go a bit further than me before pitting and that paid off for him.

"Otherwise, I had a good feeling from the car and thought I could have won."

Raikkonen finished fourth in only his sixth GP - which put him level on points for the season with Hakkinen, who he would replace at McLaren in 2002 - while Panis and a delighted Verstappen, the first driver one lap down, completed the scorers.

As for Montoya? He had made it back up to fourth before his hydraulics packed up on lap 41.

He didn't get the result he or his team had wanted, but 19 years of motorsport obsession later, I have a lot to thank him for. Even if my long-suffering family probably don't. 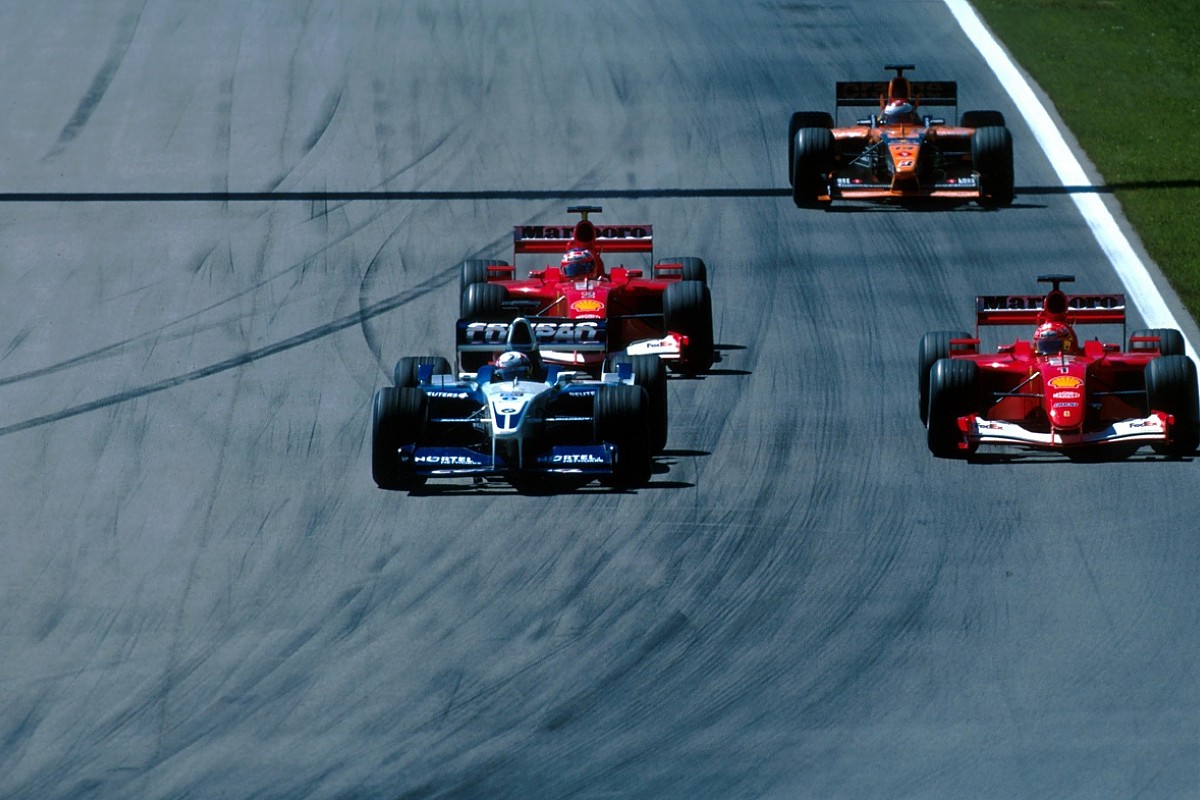