Just a fortnight on from their collision at the British Grand Prix, the cynics suggested that Hamilton’s leisurely holding up of Verstappen was a bit of a psychological offensive – and potentially aimed at trying to time out his Red Bull rival from getting a final Q3 run in.

When Verstappen made it across the line with barely one second left to run, and his team-mate Sergio Perez didn’t make it all, there were some who suspected foul play.

Former F1 driver Romain Grosjean tweeted almost immediately: “If that was made on purpose, it’s not pretty…”

But while Red Bull made reference to some ‘gamesmanship’ from Hamilton, the team was not unduly upset or shocked by what had happened.

Team boss Christian Horner told Sky Sports F1: "Lewis has got a hell of a lap in the bank, and then obviously he’s just backing things up, up, up, and he doesn’t want to give obviously our cars a clean run. But it’s his right to do that. He’s got the track position. We haven’t got a major issue.”

Indeed, as Horner pointed out, there was nothing that Hamilton did that was untoward, unexpected nor against the rules in driving slowly like he did at the end of Q3.

F1 has several regulations in place to ensure that drivers do not drive in a manner that could cause trouble to their competitors in qualifying.

Article 27.4 of F1’s Sporting Regulations makes it clear that any driver who does something out of the ordinary could face a sanction.

It states: “At no time may a car be driven unnecessarily slowly, erratically or in a manner which could be deemed potentially dangerous to other drivers or any other person.”

Furthermore, for the qualifying sessions, F1 race director Michael Masi lays down a specific minimum lap time that drivers must adhere to between the two safety car lines on the track to ensure they don't drive too slowly. 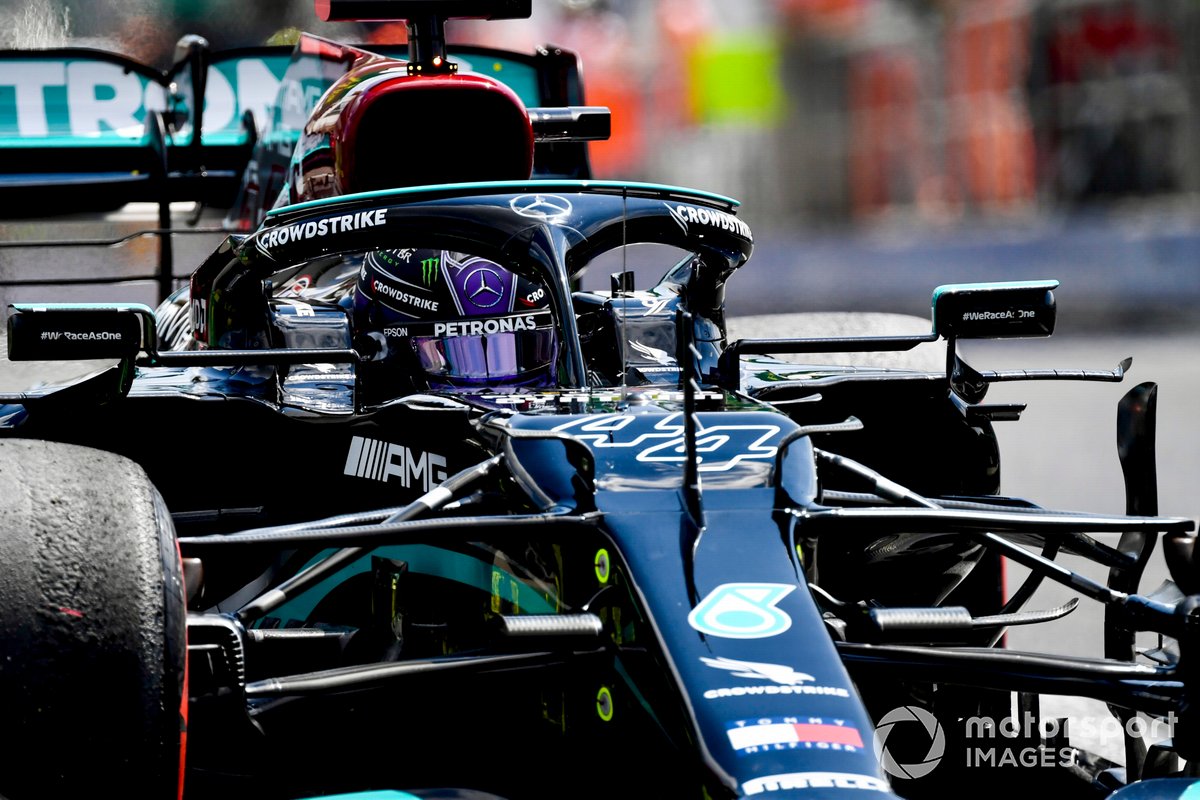 Hamilton’s final Q3 out-lap was below this, so there was no need for the FIA to consider any rules breach.

But beyond sticking to the rules, Hamilton’s Q3 lap was also not the slowest out-lap that he had done at the Hungaroring in qualifying.

As the Mercedes driver designated to run second in qualifying (as it was team-mate Valtteri Bottas’ choice of when to run this weekend), Hamilton’s out-lap pace was always going to be primarily dictated by what the Finn was doing ahead of him.

So in all the runs, Hamilton needed to try to back himself up and away from the turbulent air that Bottas was leaving ahead of him.

Knowing about the maximum time between the two safety car lines, Hamilton will have known that a very slow pit lane exit and run to the SC2 line was essential for building a buffer, as he couldn’t drop much further back in the main section of track.

But an analysis of Hamilton’s out-laps throughout qualifying also show that the final Q3 lap was not a stand out in speed terms – either compared to his earlier runs or what Bottas was doing.

Here is a look at how the out-laps of the two drivers compared – with the medium (M) runs obviously being conducted at a faster pace for tyre temperature reasons. Times were taken from the moment the drivers left the garage to the start of their flying laps, including the run down pitlane.

As can be seen from the data, Hamilton’s final Q3 run was five seconds faster than his final run in Q1 – and was on a par with what team-mate Bottas was doing ahead of him as they both tried to build a gap.

And ultimately, it must not be forgotten, had Verstappen been unhappy about the slow speed of Hamilton, then he could easily have overtaken him in the middle section of the track to ensure that he didn’t risk being timed out. There is nothing in the regulations that stops a driver from doing that, even if there is a gentleman's agreement between drivers about etiquette through the final corners before a qualifying lap.

It is obvious that, in the wake of the huge Silverstone controversy, any close running between Hamilton and Verstappen now will be put under the spotlight – but both Red Bull and Mercedes were clear that this time there was nothing nefarious going on.

However, that didn’t stop Mercedes boss Toto Wolff having the last word when asked if his rival’s calm reaction was a sign that tensions were dying down between the two teams.

“I think they would have known that if they made a thing of that again, it would have ended in another PR fiasco,” he smiled.

Gamesmanship looks set to continue both on track and off it.