Mercedes has dismissed the idea that it is running a ride-height control device on its W12 Formula 1 car, although the rear has been seen lowering during the straights.

Having shown excellent straightline speed in recent rounds, particularly at the Turkish Grand Prix, Mercedes came under fire from Red Bull team boss Christian Horner – who suggested that the team was “obviously optimising a straightline device” to Sky F1.

Those claims were refuted by Mercedes boss Toto Wolff, who said that the team’s performance on the straights were a culmination of “all the small gains, marginal gains that have been added and bring performance.”

However, video footage of the Mercedes W12 shows a marginal squatting of the rear during the high-speed areas of the track, with the ride-height rising as the car brakes for a corner.

Mercedes already runs a low-rake package, which means that the rear is raised significantly less relative to the front compared to cars like the Red Bull, which runs at a very high rake.

Although a higher rake is an advantage in the corners, in which the airflow under the floor can be accelerated and the effective diffuser space opened up to reduce the pressure under the car, it is a hindrance in the straights.

This is due to the greater amount of drag it produces, as the air is worked harder by the floor – and the frontal area of the car increases as the rear of the bodywork runs higher. 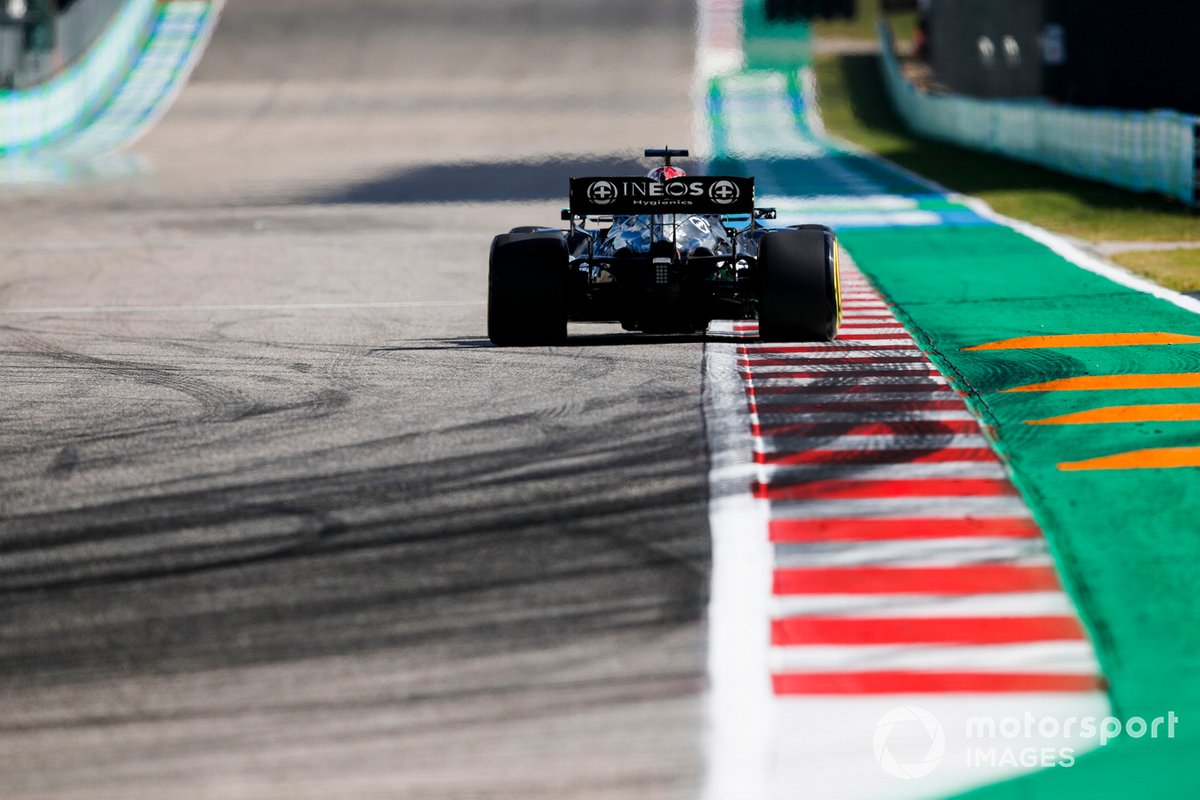 It appears as though Mercedes has found a set-up which allows the rear to drop as the car accelerates, thus yielding that effect of reduced drag which means the car’s maximum velocity is greater.

Although it is currently unknown how the car produces this effect, one method of running a passive system is to install a spring setting that allows the rear of the car to compress as downforce at the rear increases, and then relent as the downforce reduces.

Using a softer spring will also cope with the changes in elevation experienced at the Istanbul Park circuit, and thus prove useful for delivering consistent grip around the bumpy Circuit of the Americas surface.

It can also produce a stall in the diffuser, which is something that teams often try to employ at a certain speed to improve acceleration, owing to the lower position.

One difficulty to consider is that when the car returns to its natural position in the braking zones, the airflow must reattach sufficiently to ensure that the diffuser works to produce the downforce required for the corners.

It seems that the W12 makes a gradual return to its regular rake once the driver gets off the accelerator, ensuring that the airflow has plenty of opportunity to assume its desired position.

Mercedes seems incredibly confident in its set-up changes and, given the pressure placed on the team by its need to introduce new engines in the previous few rounds, it seems that the straightline gains tally with the team’s claims that it has found a “sweet spot” with its suspension configuration rather than finding extra performance from the powertrain.