Formula 1 is embracing an all-new car design for 2022 season, with a significant push from the series bosses on making the cars able to race each other more closely.

As part of this overhaul, F1 has adopted a larger wheel rim design, having flirted with the idea many times before. The shift to 18-inch wheels means Pirelli has also had to adapt its offering and will produce a tyre with a much shorter sidewall. This is where teams and drivers might have to adapt the most when considering how the new tyres behave when compared with the outgoing rubber.

Firstly, the driver's view will be more impaired than before. Not only have the wheel rims been increased in diameter, so has the entire assembly. With Pirelli’s tyres mounted, they are 60mm taller than the previous generation, which will make looking out over the top of them a little more challenging. Drivers’ sight will be hindered further still by the wheel wake deflector that will be mounted above it.

Aerodynamicists will also be challenged by the changes, as the lower profile tyre will behave differently to the outgoing rubber - with the dynamic behaviour of the tyre creating inconsistencies.

A number of aerodynamic tricks have been used in F1's recent past to mitigate the effect known as ‘tyre squirt’. But, with many of those design features either removed or heavily constrained, teams will have to find new ways to deal with the resultant change in the tyre’s stiffness and sidewall height.

Pirelli has long been at F1's mercy in order to increase entertainment, with thermal degradation identified as a way of creating strategic differences between the teams and drivers. However, as part of the overhaul, drivers had requested that their need to manage tyre life would be reduced, allowing them to race more freely. 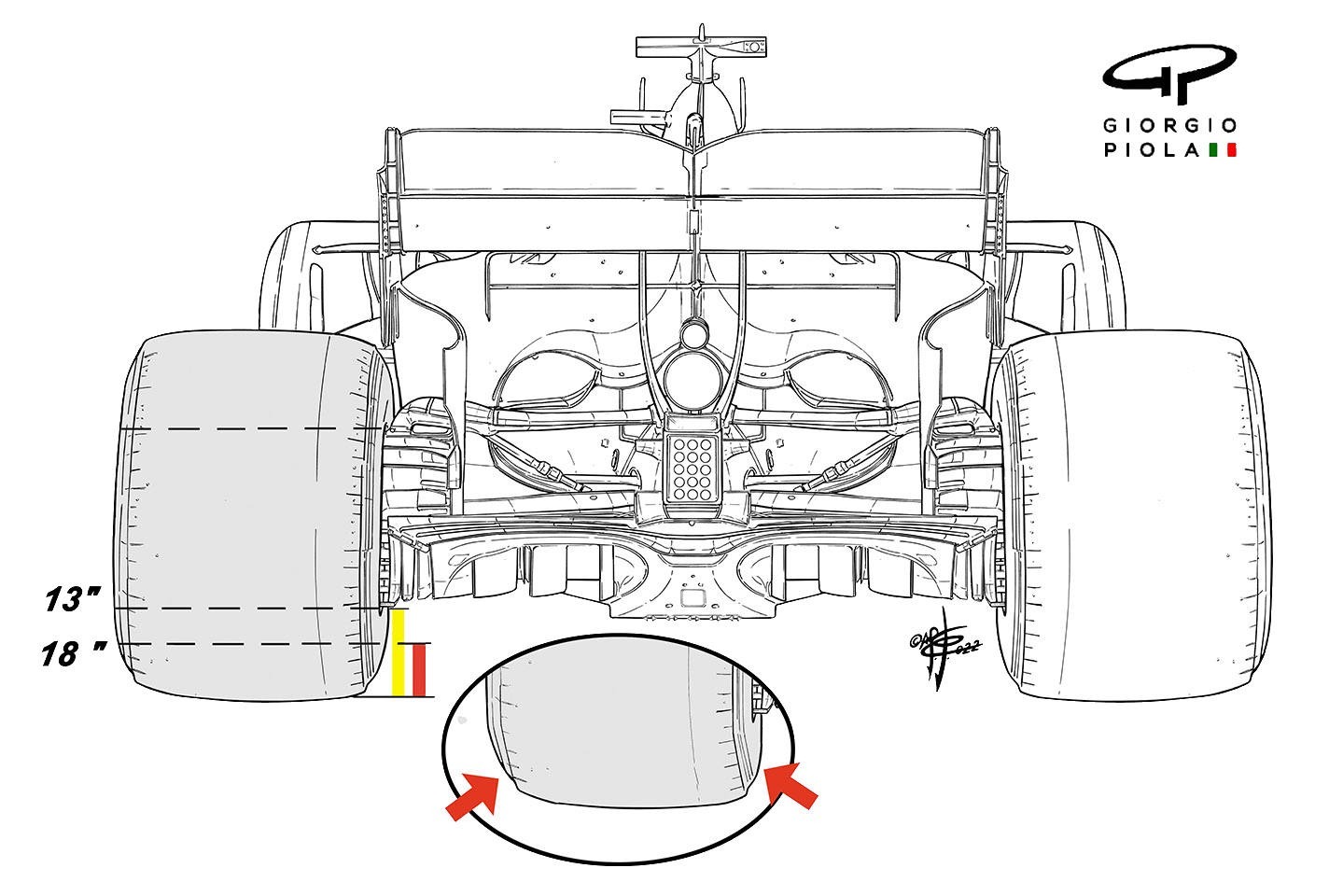 Driving well below the actual potential of the car became a common theme to prevent the tyre from overheating and resulting in unplanned pitstops. Drivers had to stick to a lap time that meant it was quicker to be out on older tyres than it was to lose time in the pits stopping for fresh tyres. When time loss for having to clear traffic was factored in, the tortoise-style strategy became more appealing than being the flat-out hare.

Pirelli’s approach to the design of the new tyres and the impact of the car's redesign could alter this strategy perception though. The stiffer, shorter sidewall tyres will feature a new construction in an effort to resolve some of the temperature issues teams faced on the shoulder of the tyre, which should result in less management.

Teams worked hard during the previous era to alleviate some of these issues and found pockets of performance from numerous sources, including tyre blanket strategy, the design of the wheel rim, brake ducts and suspension set-up. All face a significant design reset going into 2022, not forgetting that the aerodynamic balance of the car will also vary, given the shift to a more underfloor biased design.

Firstly, whilst the current regulations suggest that tyre blankets will finally be banned from 2024 onwards, the main change going into 2022 is that the maximum temperature of the blankets is set to be reduced from 100 to 70 degrees Centigrade. This could have an impact on how drivers approach their exit from the pitlane or at the start of a race, as they might need to warm the tyres, rather than immediately manage their temperature.

However, the way the tyres are worked may differ too. Many teams had raised the suspension elements and used more extreme pushrod-on-upright solutions in recent years to help with various aerodynamic endeavours, these - along with the hydraulic solutions that have helped with compliance - have been removed. Instead, teams will return to classically sprung suspension arrangements which obviously have a bearing on the car’s behaviour and provide the driver with different feedback and feeling.

Meanwhile, the switch to BBS as F1's single supplier of wheel rims means that any advantages that had been gained in terms of controlling the transfer of heat between the rim and tyre will be eroded too. The likes of the large cooling fins seen on the Mercedes in recent years are no longer possible. 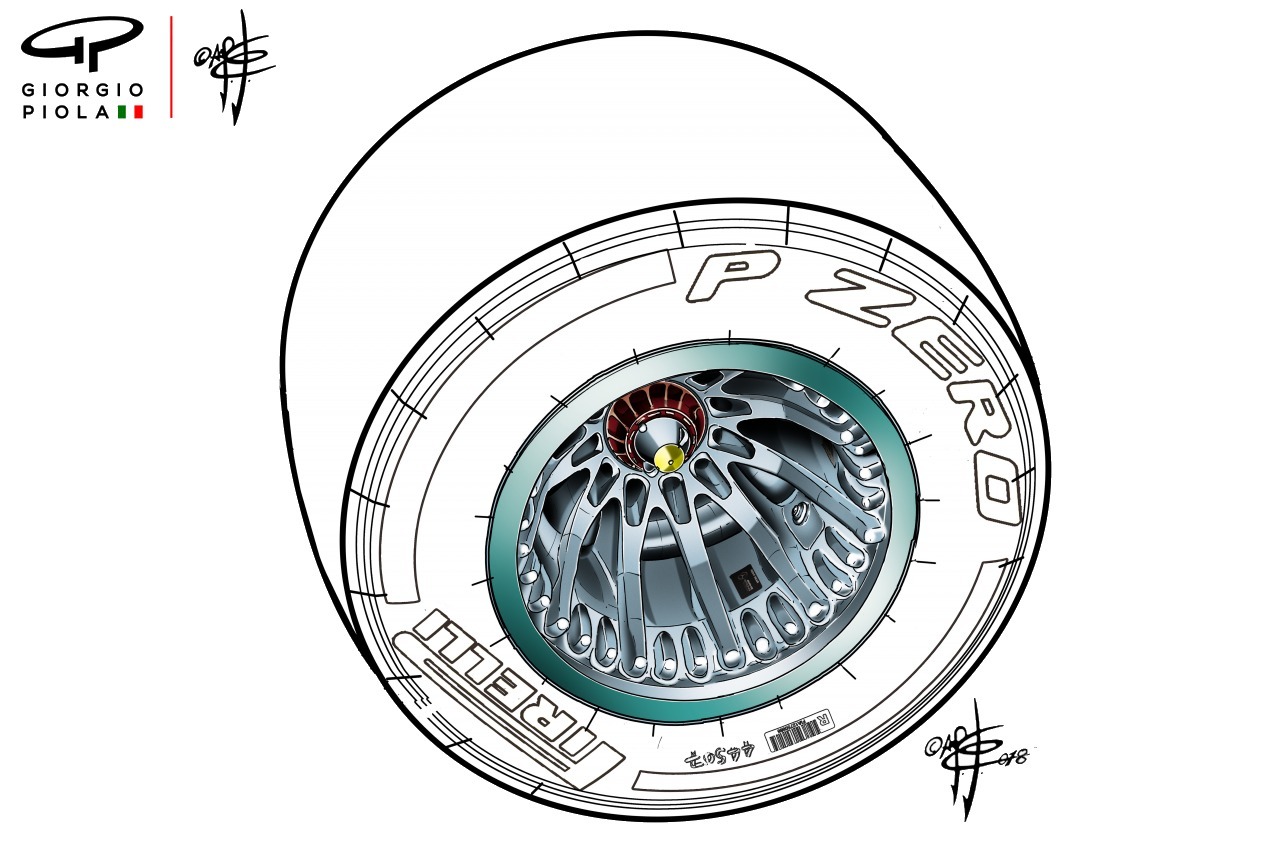 It’s also worth bearing in mind that the size of the brake discs are also different in 2022, with the standard 278mm diameter for front and rear discs used since 2017 exchanged for new dimensions. At the front, teams can select a disc size between 325 and 330mm, while at the rear the allowable disc diameter will be between 275 and 280mm.

These changes have ramifications in regards to the disc’s designs, and their proximity to the larger wheel rims, with additional design considerations then feeding back into the design of the brake duct too. This could be considered an avenue where teams might be able to find some small gains over their rivals. But while the ability to create the complex designs they used in the past has been dramatically curtailed, the transfer of the heat generated under braking might still prove pivotal in managing the tyres temperatures.

As seen on McLaren’s design for its mule car used at last month's Abu Dhabi rookie test, there’s scope to increase the brake drum to match the size of the wheel well, as it would have done previously. However, the teams might also find there are some benefits to having a slightly smaller drum and an enlarged void between it and the wheel rim. 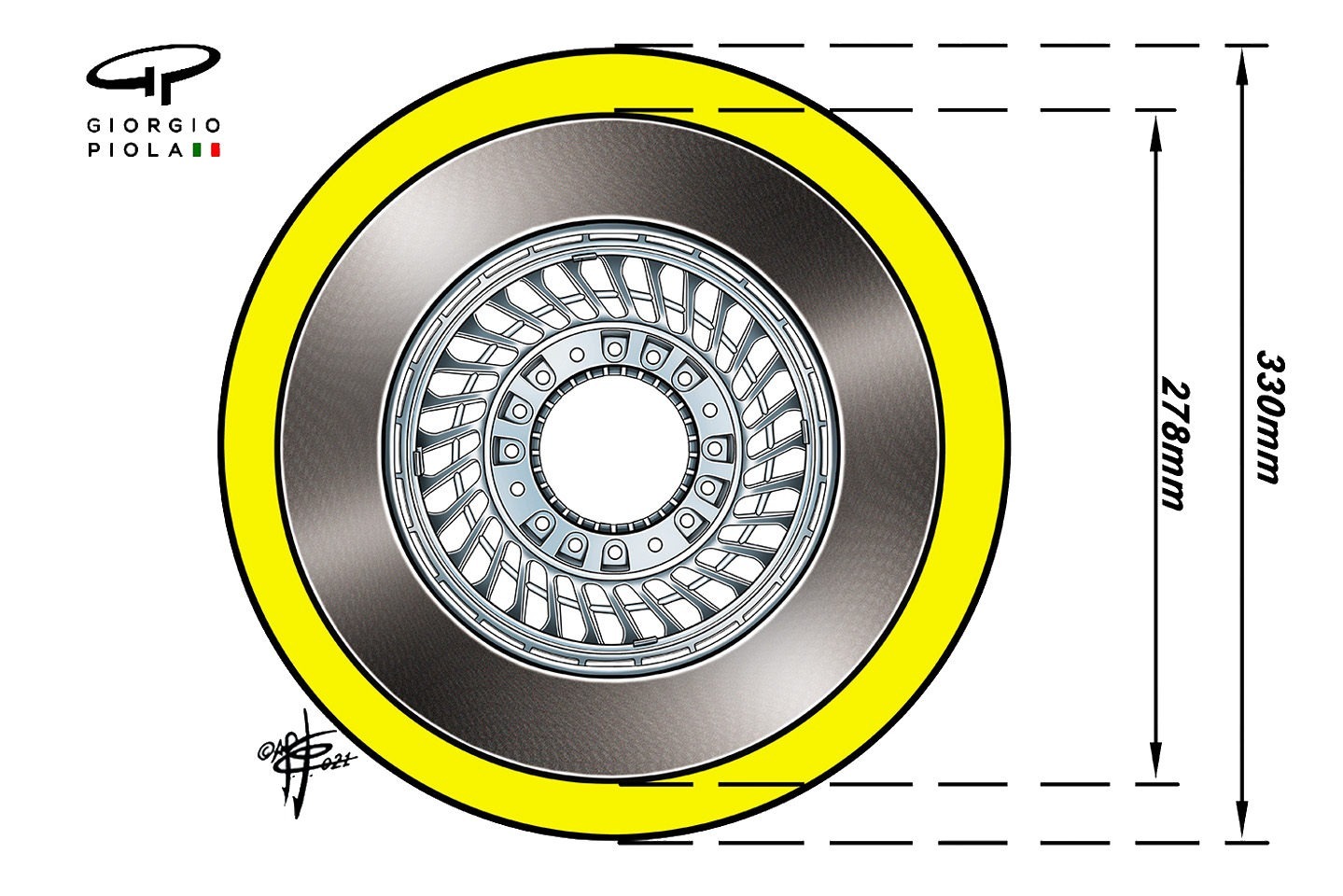