What has upset rivals over Mercedes’ F1 wing mirrors

While Mercedes’ new sidepods grabbed the main attention at last week’s Bahrain Formula 1 test, the most contentious part of its design has actually been its mirrors.

For the shrinked sidepods have been widely accepted as an aggressive but fully legal design.

The same cannot be said of the way Mercedes has implemented its mirror solution on top of the side impact area, as rivals have questioned whether or not they operate in a grey area of the rules.

Ferrari team boss Mattia Binotto is one who believes the mirror design is something that needs further clarification, amid fears it could open the door for an expensive arms race as teams are forced to chase ‘spaceship’ solutions.

So what is it about the Mercedes mirrors that has most annoyed the team’s rivals?

To alleviate any misconceptions, this has nothing to do with the aerodynamic fairing around the upper Side Impact Structure (SIS). While seemingly at odds compared to other teams, this solution is no less effective from a safety standpoint.

The standardized SIS were introduced in 2014 and can be built to specification in-house or purchased from Red Bull Technologies.

The design of SIS had spiralled out of control in recent years, and so a specification design was introduced that prevented teams from spending inordinate amounts on complex structures that fit their aerodynamic demands and could pass the push off tests.

This means, as a spec item, there’s no longer a need for a push off test. All that the teams need to ensure is that the SIS fits in the boundaries of the legality boxes set out in the technical regulations.

It’s been popular to fit the upper of the two SIS in a lower position since the regulation change in 2017 (see lower right inset for an example on the Mercedes W10, below), as it could be faired-in separately from the main sidepod bodywork, providing protection from the front tyre wake, whilst allowing the size of the inlet to be shrunk too. 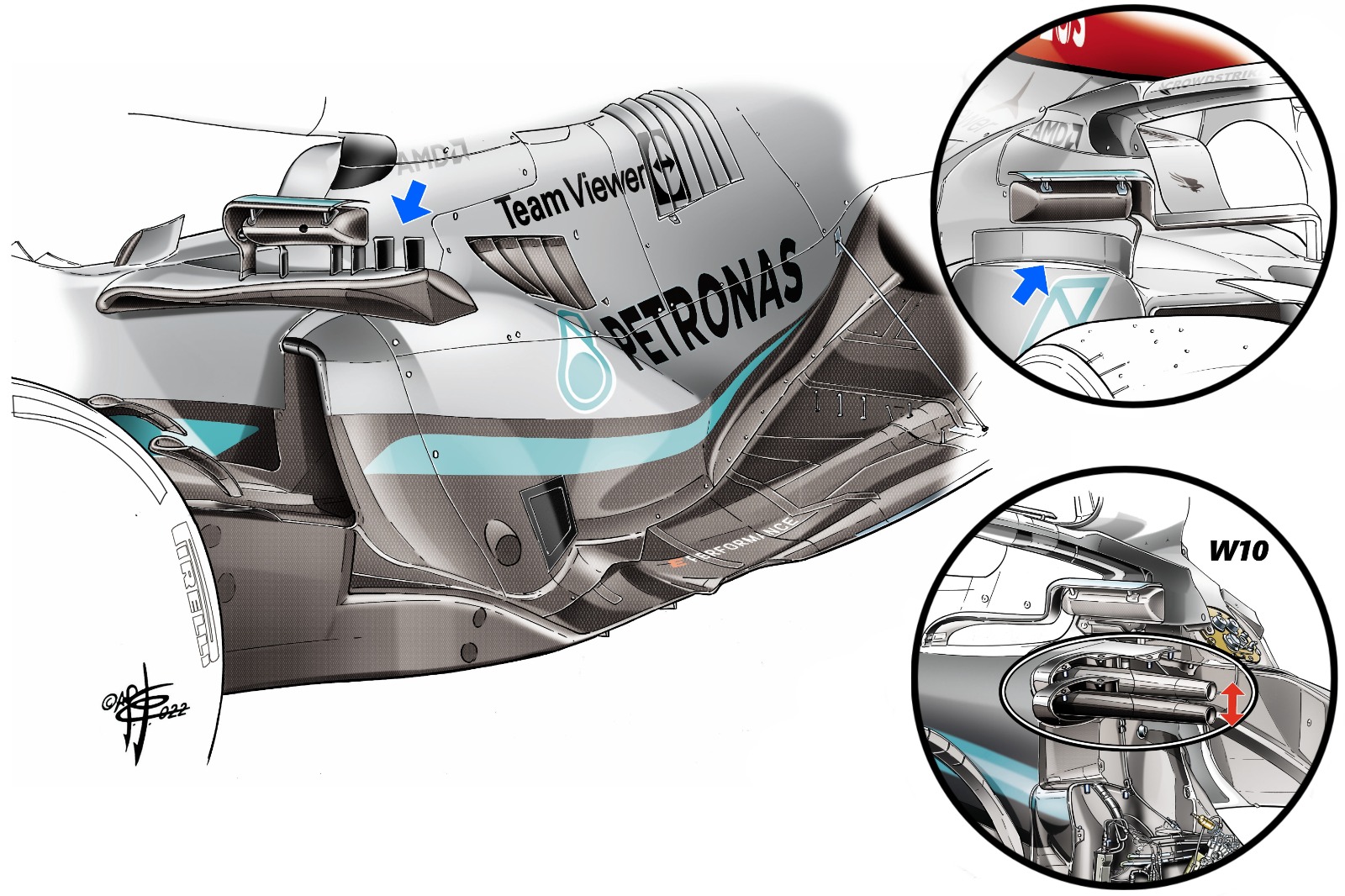 The new regulations have forced everyone to rethink this design strategy as they must now be at least 50mm higher than before.

In the case of Mercedes it has simply positioned its SIS near the upper boundary of the legality box, allowing it to once again use the bodywork as a flow conditioner and influence the design of the sidepod and inlet.

Where the Mercedes design has come under scrutiny from the other teams is in the design of its ‘mirror stays’ (blue arrows) with the outermost stay split up into multiple surfaces within the allowable box region. These undoubtedly serve an aerodynamic purpose, rather than offering structural support.

The key here is an FIA demand in the regulations that any aerodynamic benefit from mirror components are supposed to be 'incidental' - and not their primary purpose.

The regulations are clearly weak in this respect, as a number of teams have flow conditioning supports that extend back over the shoulder of the sidepod, as was the case with the mirror stay used in the W13’s original guise (upper right inset, above).

Furthermore, it’s not only Mercedes that has opted to split its mirror stays into smaller vortex generating fins. AlphaTauri may have gone under the radar but it also has a very similar design (top left, below). 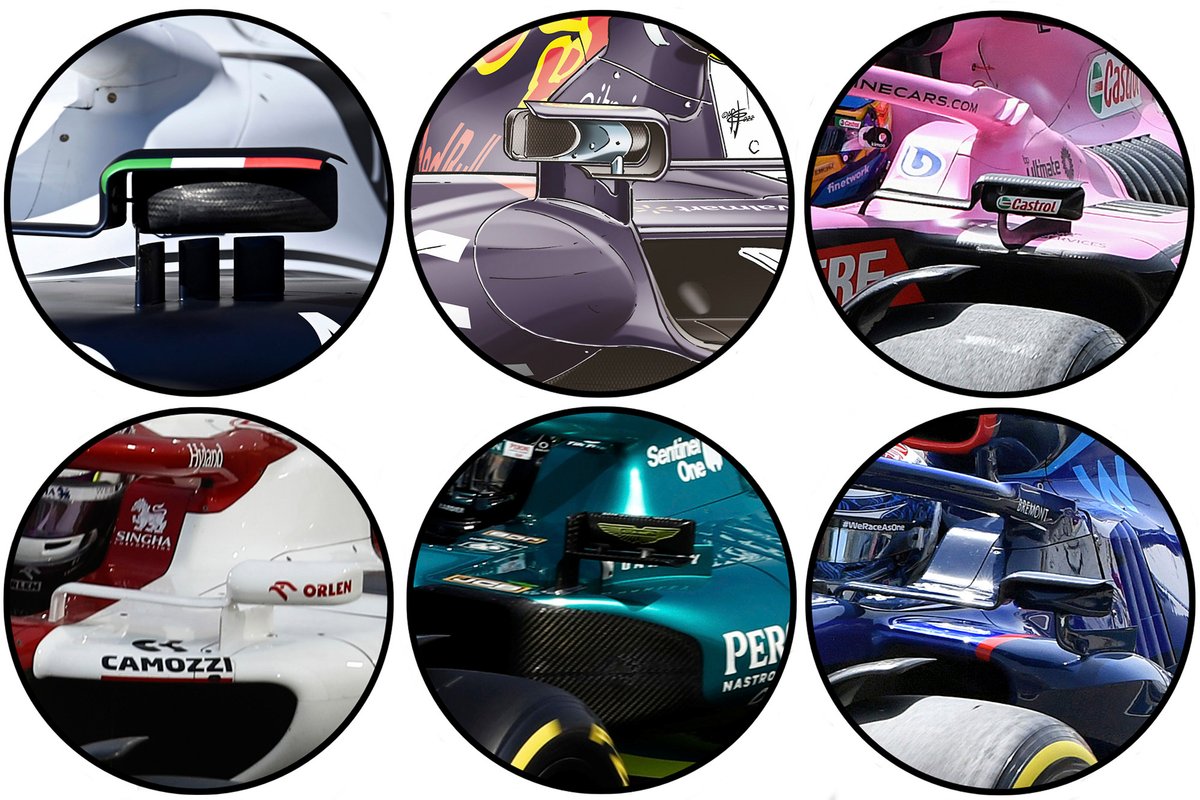 The legality of the rear mirror stay in the Mercedes and Alpha Tauri designs really relies on the following continuity clause within that section of the regulations:

iii. When cut by any X-Plane, form a single section measuring no more than 50mm in Z and no more than 10mm in Y.

This means that if you were to take a slice through the mirror stay section, there must be no more than one section of bodywork, which as you can see from the dotted line on the image (below), in the X-plane, there’s no interaction between the sections.

However, if there were overlap, as shown in the inset as an example, this would be considered illegal. 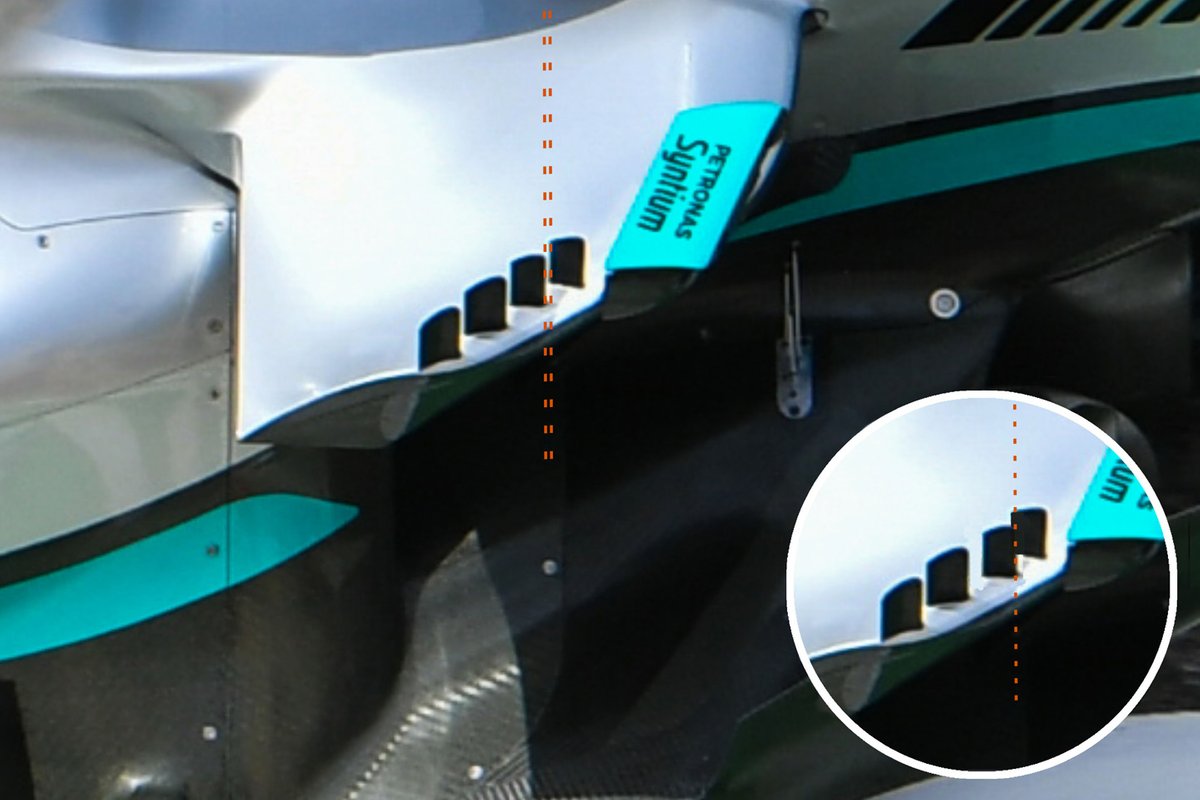 It will be interesting to see how this story continues to develop during the course of the season, as there’s clearly performance to be found from these various solutions, even if some feel that they push the boundaries of the rules.