Sebastian Vettel says Aston Martin’s new rear wing was not the only reason behind his encouraging seventh place in second practice at the Hungarian Grand Prix.

The Silverstone-based team introduced an intriguing wing design in Budapest on Friday, having seemingly found a loophole in the wording of the regulations and been given the go-ahead by the FIA to pursue its novel interpretation.

Vettel suggested the wing did not represent a “massive step in performance” and added that the team had been more aggressive than usual with its Friday run plan.

In other words, with Saturday expected to be affected by rain the car ran with lower fuel than it would normally do, perhaps flattering the German’s position in the order.

Nevertheless his apparent speed will have caught the attention of rival teams that were surprised by the wing design.

By way of comparison Vettel was 12th, 13th and 13th in the last three FP2 sessions, although he was fourth in the same session in Montreal.

“Overall it was a good day for us,” he said. “We didn't have any problems, we were able to get a good feel of the car. It's still a bit disconnected here and there, and some stuff to do.

“Obviously, this is a track where you try to have and put all the downforce on the car that you can. Obviously, there's a new rear wing, it's not a secret.

“It's not a massive step in performance. I think it's doing what it was supposed to, so you don't see a big, big jump for us.

“I think we probably were a bit more aggressive than maybe other Fridays. So yeah, overall, it's good to see that the team is trying to think of things and solutions, but you always wish that they were having more of an impact." 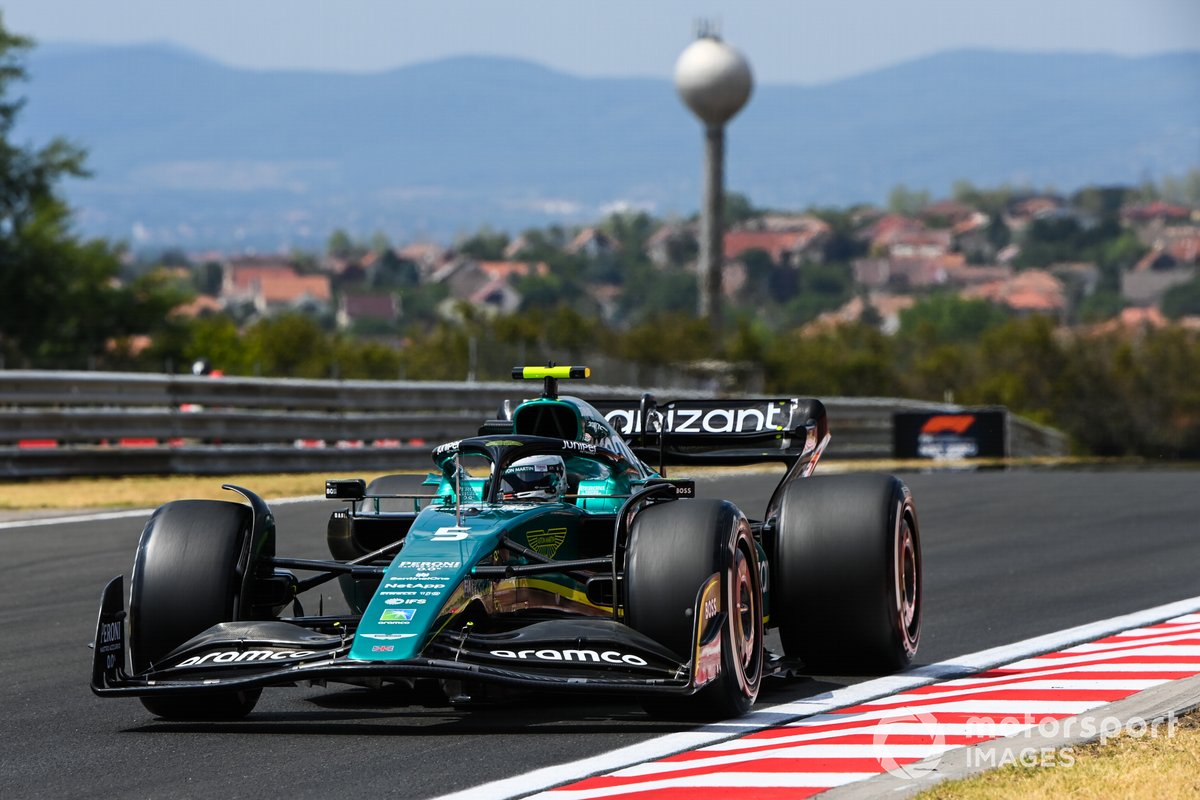 Aston struggled in the recent wet qualifying sessions in Montreal and Silverstone, and Vettel conceded that the team will have to do a better job at the Hungaroring on Saturday.

"We'll see how wet it is going to be," he said. "Obviously it would be a shame if it was to be that wet that we can't run, and people on the grandstand are having a not so nice day! So fingers crossed.

"But yeah, if it's wet, then I think we really need to up our game compared to the last two times we had wet qualifying sessions.

"So a bit of homework and preparation to do, but for now, I think it's been a good start to the weekend."

Asked what the team could overnight he said: “I mean the classical rain set-up doesn't exist anymore, those have been gone for a long, long, long time. I probably witnessed just the end of it when I joined a long time ago!

Vettel also outlined his target for his first race since his retirement announcement.

"Points. Just missed them last week, and I think that's the target from now on, to score points every race."

What is F1's summer break, why does it happen and how long is it?