Sebastian Vettel has lost second place in Sunday's Formula 1 Hungarian Grand Prix after the FIA disqualified the Aston Martin driver for not having enough fuel left in his car.

Vettel finished second at the Hungaroring behind first-time winner Esteban Ocon after not being able to find a way past the Alpine driver, scoring his second podium of 2021 for his new team.

After crossing the finish line, Vettel parked his car at the side of the track at Turn 12 after being ordered to stop by Aston Martin over the team radio.

It later transpired that the German didn't complete the cooldown lap due to a lack of fuel in his car.

During post-race scrutineering the FIA wasn't able to take a one litre sample of fuel out of Vettel's Aston Martin for fuel checks, as required under the regulations.

Technical delegate Jo Bauer therefore referred the matter to the stewards, stating that "only a 0.3 litre sample" of fuel was able to be extracted from the car.

That was in breach with Article 6.6.2 of the 2021 Formula One Technical Regulations, which says that "competitors must ensure that a 1.0 litre sample of fuel may be taken from the car at any time during the event".

Afterwards Aston Martin attempted to extract the required one litre sample under the FIA's supervision, but it failed to do so, earning Vettel a disqualification.

In their verdict, issued at 10pm local time, the FIA stewards noted: "The team was given several opportunities to attempt to remove the required amount of fuel from the tank, however it was only possible to pump 0.3 litres out.

"During the hearing in presence of the FIA Technical Delegate and the FIA Technical Director, the team principal of Aston Martin stated that there must be 1.44 litres left in the tank, but they are not able to get it out. This figure is calculated using the FFM or injector model. 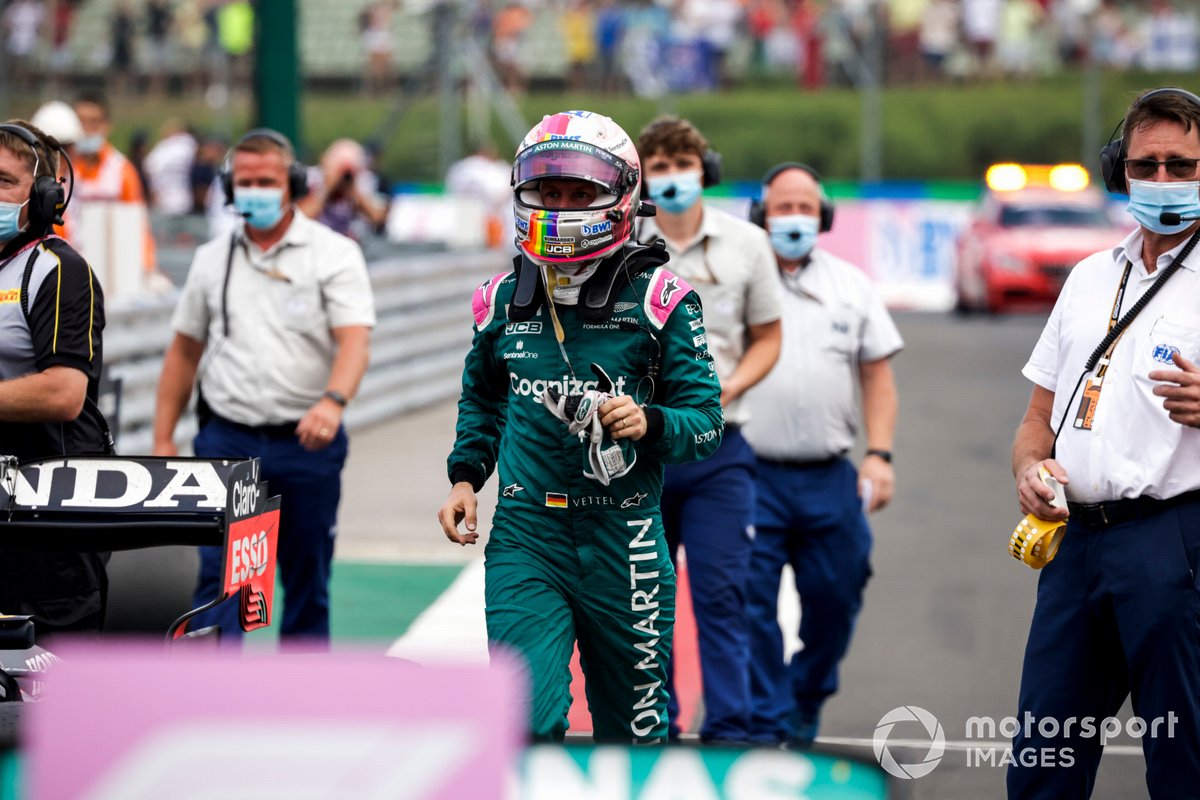 Aston Martin have the right to appeal the stewards' decision but it is not yet clear if they will do so.

The decision is a boost for Mercedes' Lewis Hamilton in his title fight against Red Bull's Max Verstappen as he moves up from third to second and increases his championship lead from six to eight points, Verstappen also scoring an extra point by moving up to ninth.

Alfa Romeo's Kimi Raikkonen moves up to 10th to take the final point.

Before his disqualification Vettel, who also received a reprimand for wearing a t-shirt in support of LBGTQ+ rights during the Hungarian national anthem, said he was "disappointed" not to be able to overtake Ocon and win the race.

"I'm a little bit disappointed because I felt I was a little bit faster the majority of the race," Vettel said. "But Esteban didn't do a single mistake and I didn't really get close enough.

"Obviously, it's a great result for us but when it is that close for sure you are always looking at the win rather than the second."

Vettel last suffered a similar fate at the 2012 Abu Dhabi Grand Prix when, driving for Red Bull, he was excluded from qualifying for failing to provide a large enough fuel sample.