Vettel has dropped from leading the title race to trailing Hamilton by 67 points in just seven grands prix, with his rival winning six of those and currently on a four-race victory streak.

Hamilton can now seal the title at the next grand prix in the United States after Vettel hit Max Verstappen and spun in Japan, limiting him to sixth.

When asked about the championship nearly being closed, Vettel said: "You say nearly.

"Obviously there is still a chance, the last couple of races we made it a bit too easy for them.

"But also credit to them, they executed well. That is the name of the game.

"We need to look after ourselves and do our bit for the next couple of races, and then we see.

"Surely it didn't help when we finished sixth and they won the race."

Mercedes has enjoyed a qualifying advantage over Ferrari at the last three grands prix, although Vettel has been more competitive in race trim.

However, Ferrari's botched strategy in Singapore cost him second there, he was not quite on terms in Russia and in Japan Ferrari's tyre choice error and Vettel's own mistake in qualifying set the tone for a miserable race at Suzuka. 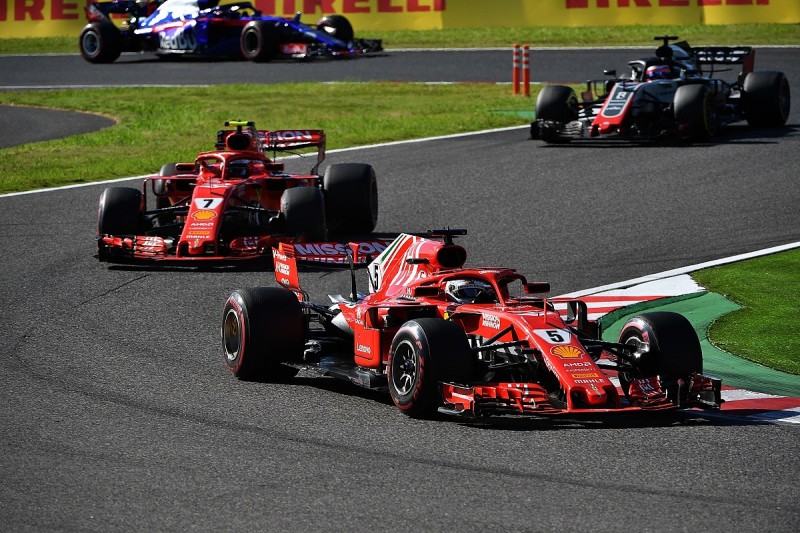 Vettel feels he could have challenged "at least one" of the Mercedes having fought from eighth to fourth on the opening lap, before undoing that work by colliding with Verstappen and dropping to last.

"It is very difficult to pass around here and follow up the hill, and with the fast corners that we have, but I thought that I could play with the car and make the tyres last reasonably well," said Vettel.

"Obviously then we never know, because I had damage and [was] in traffic and so on, but I was happy from my point of view with what I had in the race."

Ferrari's drop in performance has been stark, having emerged from F1's summer break with its pace advantage over Mercedes from the first half of the season still intact.

But Vettel's victory in Belgium was followed up by Ferrari blowing a front-row lockout in Italy, where Vettel touched Hamilton on the opening lap and spun in similar fashion to his Suzuka clash with Verstappen.

Hamilton went on to overhaul Kimi Raikkonen to win the Monza race, then took victory in Singapore and Russia - two places where Ferrari was quicker than Mercedes last year, but was outpaced this time.

Vettel said he had no explanation for Ferrari's recent struggles.

"It has always been very close," he said.

"I think the last races we were not as strong and I think the fact that we were better in the race was also due to the fact that they didn't have to push, so you will never get the full picture."