Max Verstappen serenely controlled the 2021 Dutch Grand Prix to win at home ahead of Lewis Hamilton as the Red Bull driver reclaimed the lead of the Formula 1 championship.

The only major threat to Verstappen’s race arrived after his first pitstop when he resumed behind Valtteri Bottas, but the Mercedes driver was soon cleared with the aid of DRS.

As Hamilton worked around an alternative strategy, which put him on the quicker medium tyres but for a lengthy stint, Verstappen held a 2.5s lead over his title rival, before a late Hamilton pitstop ensured Verstappen seized an eventual victory by 20.9s.

Verstappen had aced his launch from the left side of the grid to pull cleanly across in front of Hamilton, who was never close enough to pose a considerable threat into Turn 1 to pass.

That allowed Verstappen to sweep well clear of the chasing Mercedes, with Bottas launching noticeably slower compared to his team-mate.

The Red Bull driver extracted a 1.7s advantage come the end of the first lap of 72, which he extended to 2.3s next time around. 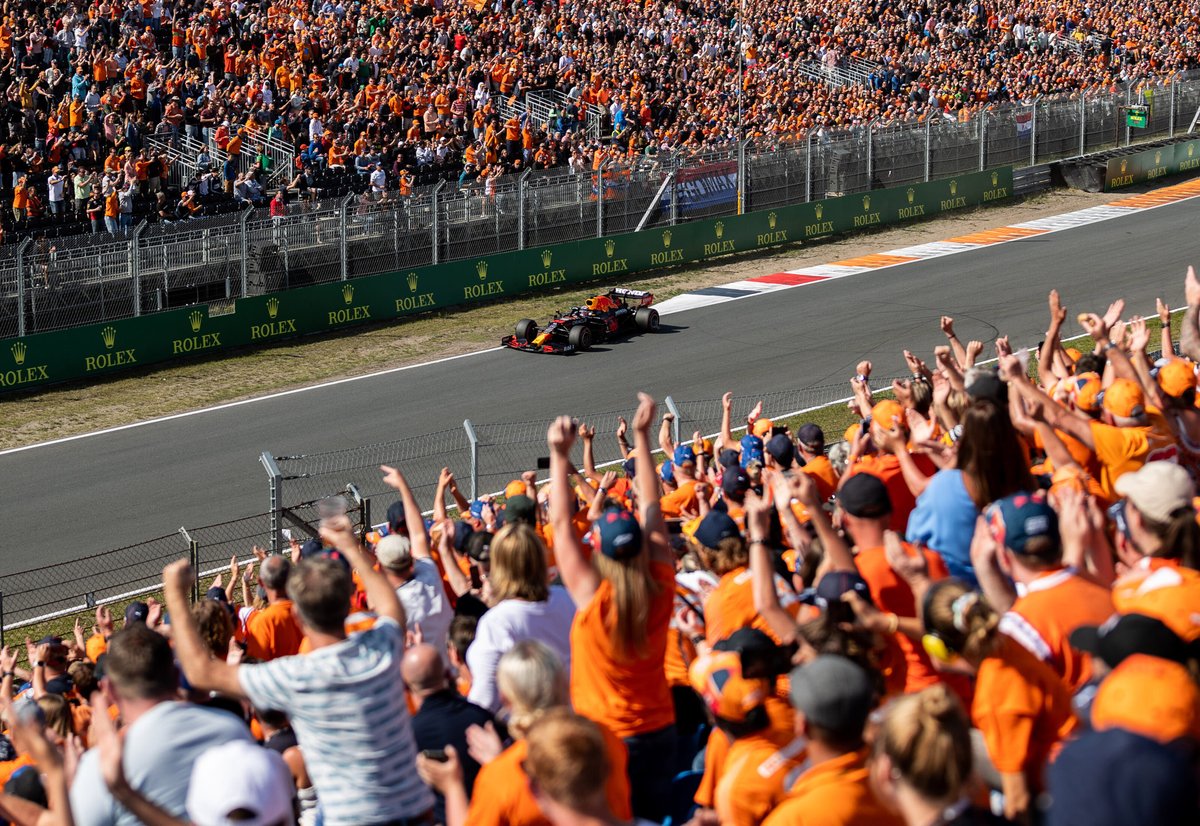 Fernando Alonso soon demoted by Alpine team-mate Esteban Ocon. Although the Hungarian GP winner enjoyed the inside line into Turn 1, the pair squeezed through the next kink before Alonso barrelled around the outside of Turn 3 on the high line to secure seventh.

Antonio Giovinazzi was also passed by the two-time champion, having to lift in his Alfa Romeo when he was nosed onto the grass by Carlos Sainz Jr before brushing the rear of Alonso, whose car was on settled over the bumps on the run to Turn 6.

A procession then set in, as Verstappen’s cushion out front peaked at 3.2s on lap 8 before Hamilton was switched over to a two-stop strategy and began to push on his soft tyres.

He was initially 0.4s quicker a lap aboard his Mercedes to bring the gap down to 2.8s, but the difference then stabilised at 2.9s as Verstappen was instructed to respond to match Hamilton’s pace.

Hamilton was called in to pit on lap 21, switching from softs to mediums, but was delayed with a sluggish change of the front-right Pirelli and he resumed in third, 13s behind Bottas.

Red Bull responded to the Mercedes threat by pitting Verstappen a lap later, also taking the mediums, but a slick service gained him a second and he rejoined with a 10s deficit to Bottas. 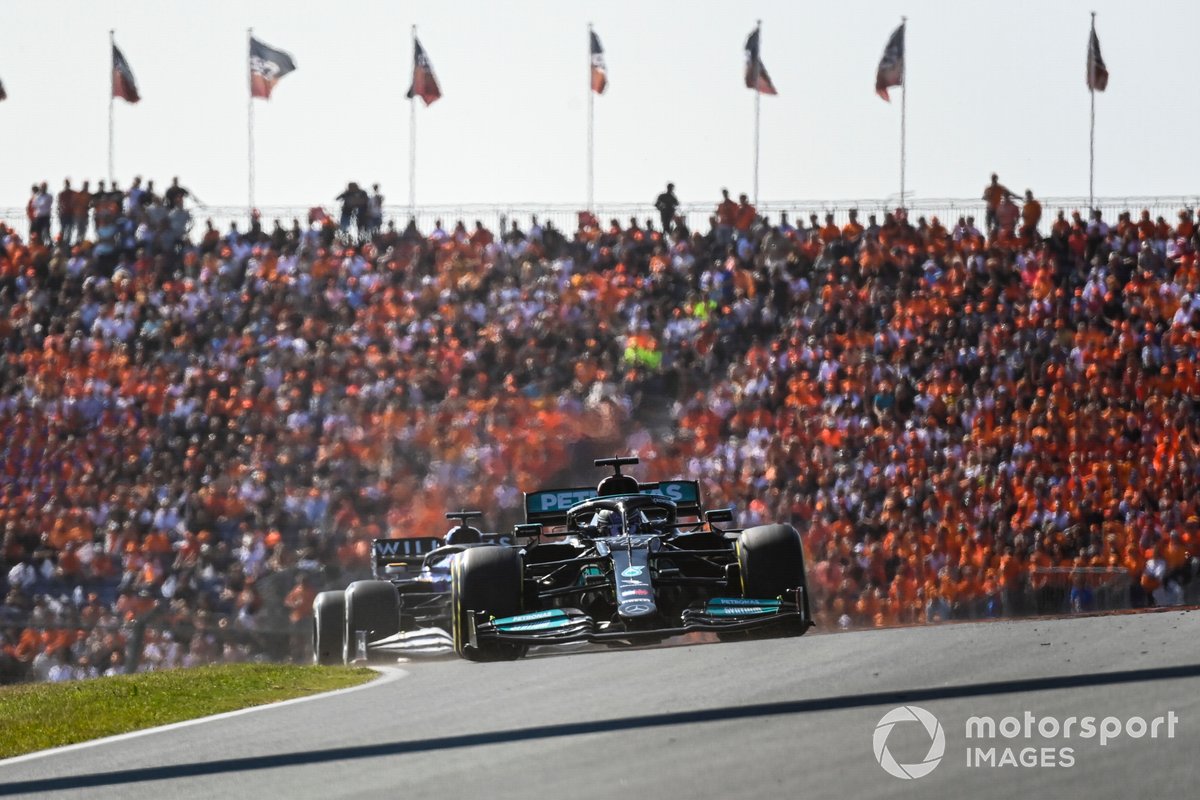 Hamilton grabbed fastest lap as the pair closed to Bottas, the Finn struggling on his softs but with the potential to delay Verstappen under the instruction to defend “for the race win”.

Verstappen closed to Bottas’ rear on lap 30, and when the Mercedes driver ran wide at Turn 11, Verstappen could close and pounce with DRS for the lead down the main straight.

Bottas immediately moved aside at Turn 2 to give Hamilton second place, with the seven-time champion 1.5s adrift of Verstappen.

Mercedes called Bottas into the pits on lap 32 for a set of mediums before he was delayed by a second at Turn 3 when he had to thread between the wall and the spinning Aston Martin of a lapped Sebastian Vettel.

Hamilton made his second stop on lap 40, switching for another set of scrubbed mediums, rejoining 2.3s ahead of his team-mate before Verstappen again stopped a lap later.

Red Bull shifted his strategy, putting him on the slower hard compound, and he returned to the circuit with a 2.9s over Hamilton.

From there, the Brit complained periodically about the health of his tyres and the call to pit early, while Verstappen established a solid lead of 3s.

Bottas was furthered delayed by a slow 5s late precautionary stop with five laps to go that came in response to a vibration. However, it gave him a chance to chase fastest lap. 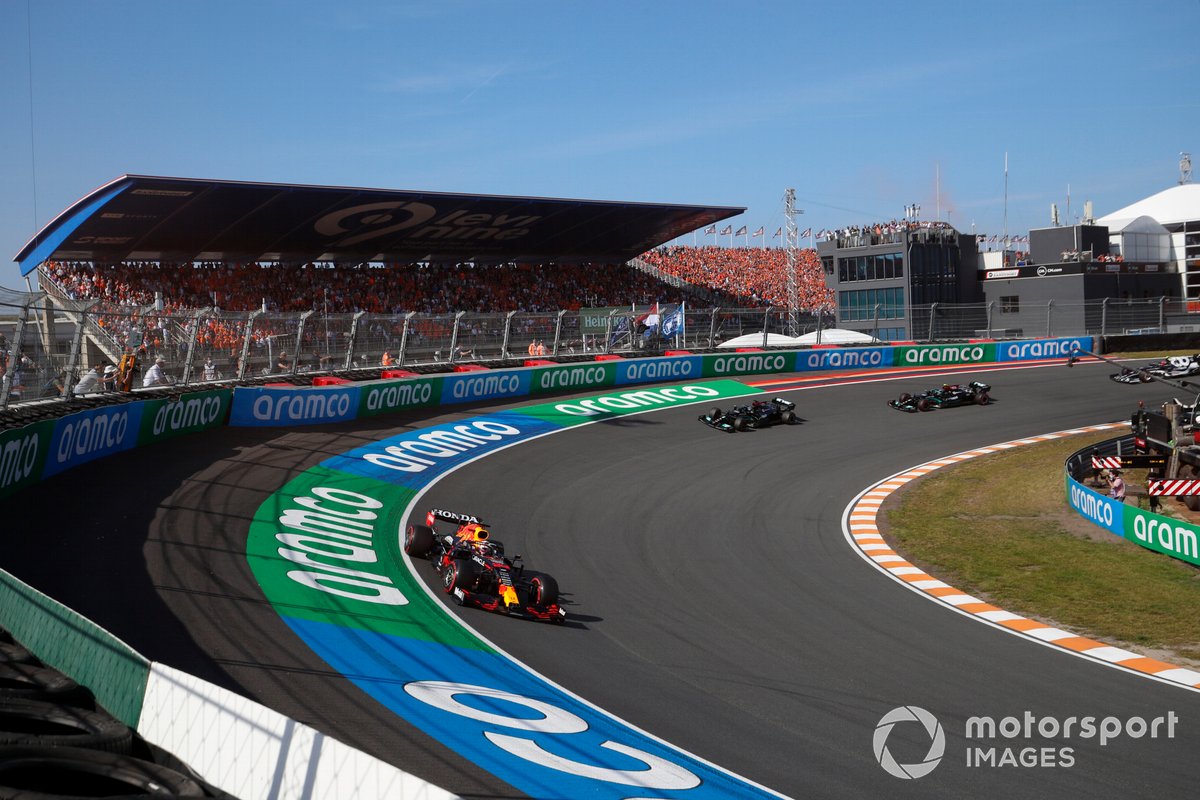 Bottas claimed that by eight tenths, which duly forced Hamilton to pit on the penultimate tour for a charge on soft tyres.

That ensured Verstappen converted his seventh win of the season by 20.9s over Hamilton as the Red Bull driver retook the drivers’ standings lead.

Hamilton was able to snare a point for fastest lap, wresting back the title with a last-gasp 1m11.097s that was a second quicker than Bottas’ previous benchmark.

Gasly endured a lonely race to maintain fourth on the grid to the flag, after Bottas completed the podium, while Leclerc headed the Ferrari attack on hard tyres to nail fifth place.

Alonso managed to escape team orders that might have called him to fall behind Ocon, despite the protests of his team-mate, as the double champion pounced late on Sainz to secure sixth place.

Perez, who had started from the pitlane following the instalment of a fourth power unit this season, arrived in eighth after a late pass around the outside of Turn 1 on Lando Norris.

Perez’s race was a slow burner after he suffered a vibration on his hard tyres to force an early switch to mediums. But the Red Bull driver was able to use the undercut to good effect before passing Daniel Ricciardo to set up the late dice with Norris.

Ocon eventually slipped to ninth ahead of the McLarens, while Lance Stroll started where he finished in 12th and team-mate Vettel recovered from his early spin to 13th.