Shortly after completing his lap, Verstappen was told on the team radio that he had missed out on beating Valtteri Bottas by just 0.015 seconds.

In response, Verstappen expressed his frustration and then said: "I ran out of energy a bit too early."

But while aware that having more energy at the end of the lap could have made a difference, the Red Bull driver thinks that the way the battery power had been used up earlier in the lap was probably still the best way.

"Of course you try to manage the energy throughout the lap, but I think probably it was the fastest way around the lap," said Verstappen.

"It's just always, when you get low out of the last corner, you feel that the engine is not as accelerating as normal because you run out of that energy.

"But, you probably use it up somewhere else. So it's always that feeling. Probably when I go back and look at the data, it's still the fastest way, but it's just a bit of an odd feeling sometimes."

Despite just missing out on a shot of splitting the Mercedes drivers, Verstappen said he was still hugely encouraged by how close he got to the reigning world champions.

"We expected to come here and, with the long straights around here, it's never going to be the easiest for us," said the Dutchman. "But I think we managed to find a good balance on the car straight away when we came here from FP1, so that helps. 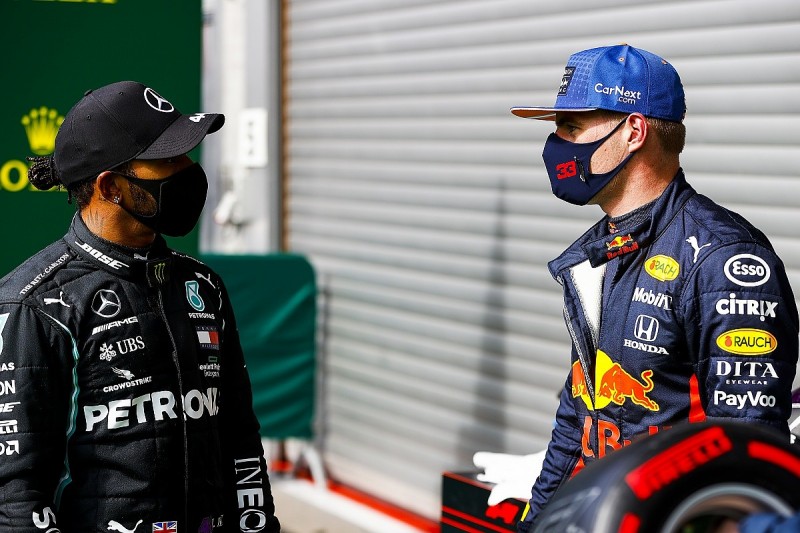 "It's been a positive weekend and I didn't really have a lot to complain. If I'm not mistaken, I think this is the closest we've been to Mercedes in qualifying on the track where we didn't expect it to be like this, so yeah, very, very happy with that. I think qualifying went pretty smooth."

Although Red Bull has been closer to the Mercedes pace in races rather than qualifying, Verstappen is still sceptical about being able to challenge polesitter Lewis Hamilton on Sunday.

"If you look at the lap time difference to Lewis, I don't think we suddenly in the race can start fighting [with him]," he explained

"But you never know. And with the weather as well I hope that will it come into play and make it a little bit more difficult for everyone. Especially around this track, if there is a bit of weather around then it makes it a lot of fun."

The F1 drivers walking an awkward tightrope in 2020