Verstappen's breakthrough pole is Red Bull's first with new-for-2019 engine partner Honda and the Japanese manufacturer's first in F1 since '06.

When asked by Autosport what message had been sent by Red Bull scoring a merited pole position against Mercedes and Ferrari, Verstappen said: "We know if you can start more up front it makes it a bit easier to control the race.

"We worked really hard to improve the engine, to get a bit more out of it in qualifying, that showed again today that we were able to push it a bit more - but within the limits of not blowing up.

"We keep improving, there are positive things coming in the upcoming races.

"Of course I'm very happy to get my first pole position but also [happy] as a team, how quickly we turned things around from the beginning of the year where we were clearly lacking.

"Now we are definitely closing up and this weekend we were there." 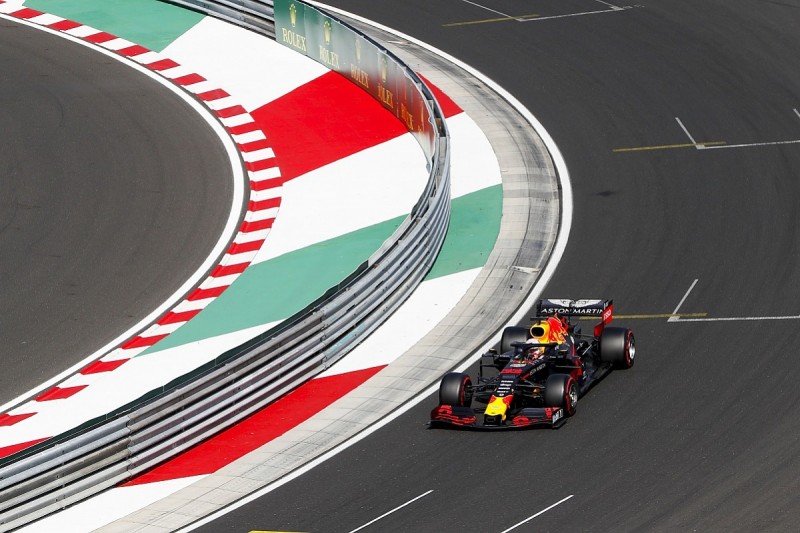 Verstappen's became the fourth-youngest driver to take a pole in F1 history at his 93rd qualifying attempt.

He joked that the main benefit to claiming his first pole is that "people will stop asking me that question!".

"For me it never really mattered," Verstappen added.

"I knew it was a matter of time, you need a bit of luck sometimes, of course I made mistakes myself to miss a pole position shot, and today we got it."

Red Bull showed Mercedes-challenging pace throughout practice at the Hungaroring but Verstappen admitted there was still "a bit of a question mark" for qualifying given the team's enduring weakness at full power compared to its rivals.

He said: "I think the whole weekend already the car was very competitive.

"It is always a bit of a question mark how it will work out in qualifying when we know they can turn up a bit more power.

"We seemed to hang in there, and car got better and better throughout qualifying.

"I was very happy, very pleased, it was really enjoyable through drive.

"I didn't really have any comments, I said just 'Keep the car going, give me new tyres', and that is exactly what we did.

"To get your first pole is very nice, but it is of course on Sunday what counts."