Verstappen's father Jos said last week that losing pole was made even worse for Max because he had to watch team-mate Ricciardo celebrate.

Jos said: "He was irritated because he missed out on pole and because of the car, but also because of Ricciardo's exuberance celebrating pole."

Verstappen played down his father's comments, instead pointing to problems with his Renault engine.

"I was mainly very angry because of the problems I had with my engine during qualifying," he said when asked by Autosport.

"That weekend I was clearly fastest, but for 75 seconds I wasn't. I was literally pissed off.

"And of course everything little thing that comes with it makes me even more angry.

"I wouldn't even say it. But I could literally do some damage to someone if somebody would say something wrong to me after qualifying, that's how angry I was.

"Every little thing makes it even worse." 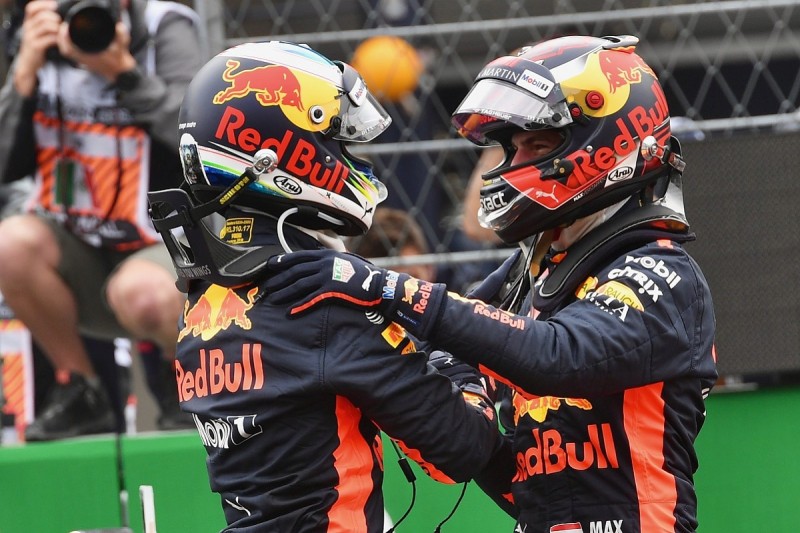 Verstappen's frustrations were put to Ricciardo, who said: "I was aware Max was pissed after qualifying, the press conference and that.

"You could tell that he wasn't pleased. I don't think it was really directed at me, I think anyone missing their first pole by such a small margin was going to be pissed.

"I mean even if I missed the pole by that, if I was in his shoes and even if it wasn't for my first pole, I'd still be upset.

"That's the competitor in us. I didn't see it as anything personal, like I was rubbing it in.

"I was obviously super happy because it's been a tough year, and I think I was the underdog in that fight for pole, so to do it, I was obviously pretty stoked.

"And I guess from his point of view he was the favourite all weekend in a way, topping all the sessions, and to get pipped by your team-mate by two hundredths or whatever it was, it's going to piss you off."

Verstappen would have been F1's youngest-ever polesitter if he had qualified first for the Mexican Grand Prix.

As Mexico was the last GP in which Red Bull has a strong chance to take the fight to Mercedes and Red Bull, he is unlikely to earn a second chance at the record.

Verstappen says it was not a concern to him. "For me I was not really after the youngest pole record," he said.

"I don't think Lewis really cares that he's not the youngest polesitter, with five titles, you know what I mean? It's not a big deal. Just fighting for pole, that was the target.

"For me it felt like I never really had a great opportunity, compared to some other qualifying sessions where felt like it was great, a good feeling, and then you're only P3 or P5 sometimes.

"This felt horrible, and then you're still second by such a small margin."