OPINION: The second Formula 1 Saudi Arabian Grand Prix began under the usual spotlight of the 'sportwashing' debate surrounding events in the country. A nearby missile attack on Friday put the whole event at risk, before a massive qualifying accident reared continuing safety concerns. While the race itself was a thriller, F1 cannot escape the scrutiny it faced last weekend and must deliver much-needed answers

“I am so happy the weekend is done. I am also just so happy that everyone is safe and I am just looking forward to getting out.” Lewis Hamilton spoke for much of the Formula 1 paddock last Sunday night after the Saudi Arabian Grand Prix as one of the series’ most turbulent weekends in recent years came to an end.

The missile strike by Houthis on an Aramco oil facility less than 10 miles from the track in Jeddah on Friday plunged the race into doubt, leading to four hours of talks between drivers. The drivers agreed not to race, only for talks with team bosses and F1 officials to lead to reassurances from government security forces that the GP weekend could continue safely.

PLUS: Why DRS still has its place in F1

And it did. With the exception of Mick Schumacher’s huge crash in qualifying – which we’ll get back to – things went smoothly. The race offered plenty of overtaking and another thrilling climax between Max Verstappen and Charles Leclerc.

But no matter how good the race was, it cannot detract from the narrative about F1’s future in Saudi Arabia, and whether it should go back. The debate about the morals of racing in Saudi Arabia is hardly a new one. Ever since plans to race there were first announced, F1 has found itself involved in the ‘sportswashing’ debate, joining a raft of sporting leagues and series to have expanded into Saudi Arabia – and pick up a handsome fee reported to be in the region of £50million per year.

Leading figures have always maintained the goal of F1 is to have a positive impact and assist lasting cultural change. On Saturday, CEO Stefano Domenicali said F1 was “not blind” to concerns about racing in Saudi Arabia, but he felt the series was “playing a very important role in the modernisation” of the country, adding: “You cannot pretend to change a culture that is more than a millennium [old] in a blink of an eye.” Toto Wolff said he would “rather come here and make the spotlight shine on the region so it needs to be in a better place, rather than say, ‘I’m not going there, I don’t want to hear anything of it’.”

The moral question is one that was put to many drivers at both the inaugural event last December and last week’s race. Hamilton admitted last year he did not feel comfortable racing in Saudi Arabia, and said last Friday before practice that his position “is still the same”, and that “we need to see more” to show that positive change is occurring. It may not happen overnight, but there can at least be more signs of progress each time we come back to answer the inevitable questions.

A number of drivers noted they do not decide where F1 chooses to race, which is true. But by considering a boycott and at one stage agreeing not to race, the drivers may well have made an important stand that does prompt a rethink moving forward. “I think there will need to be discussions after this race,” said Ferrari’s Carlos Sainz Jr. “Clearly what has happened in the last 24 hours is… it’s definitely a point of discussion and consideration that we need to take going into the future.” 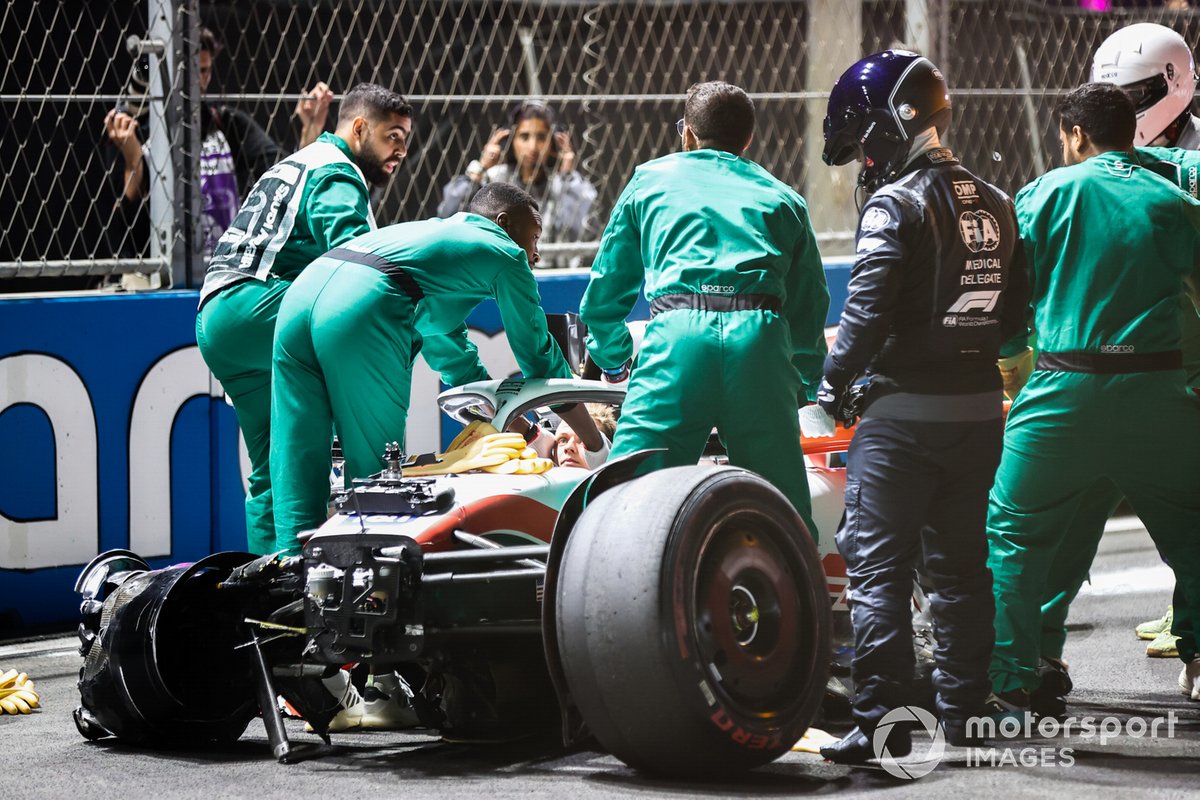 Marshals and medics assist Mick Schumacher, Haas VF-22, after his crash in Q2

Sainz also felt Schumacher’s huge crash in qualifying again underlined how the track was “a bit on the limit” for safety. Some alterations were made for this year, but the nature of the site on the Corniche means some other desired changes will take time to get in place. While all street circuits hold a greater element of risk, the Jeddah track seems to push that to the very limit. The longer lead time until the 2023 race will hopefully give greater opportunity for safety standards to take a bigger step forward.

Heading into the weekend, there was a lot of noise surrounding Domenicali’s interview with Sky Sports in Bahrain, during which he claimed there could be 30 races on the calendar if F1 wanted. He pointed out the Concorde Agreement limits the schedule to 24 rounds, which means with the additions of Qatar and soon-to-be-announced Las Vegas that something will have to give next year. Rotation is likely moving forward, but it’s a good sign that business is booming and F1 has really hit the mainstream like never before. The impact of Drive to Survive bringing new fans to F1 has been enormous, and the interest from so many new markets is only a good thing. The on-track product is continuing to deliver as well this year. It all proves F1 is in excellent health.

“I am so happy the weekend is done. I am also just so happy that everyone is safe and I am just looking forward to getting out," Lewis Hamilton

But F1 does need to have a real think now about where things stand for Saudi Arabia. This was only year two of a 10-year contract, and there is a plan to relocate to the new city of Qiddiya around 2025. But with interest at such a high level, can F1 now afford to be more fussy about where it wants to race?

More and more races want to join the calendar, but it is the traditional venues that appear to be increasingly at risk despite their reputation and special place within the hearts of fans. Although few (if any) races can stump up the same kind of cash that Saudi Arabia pays, F1 would surely manage without it on the schedule if it decided the cost of being a force for good in the kingdom was proving too great.

Few will look at the past weekend and deem it to have been a success for F1 – regardless of how good the race was in the end – meaning some big questions need to be asked moving forwards. 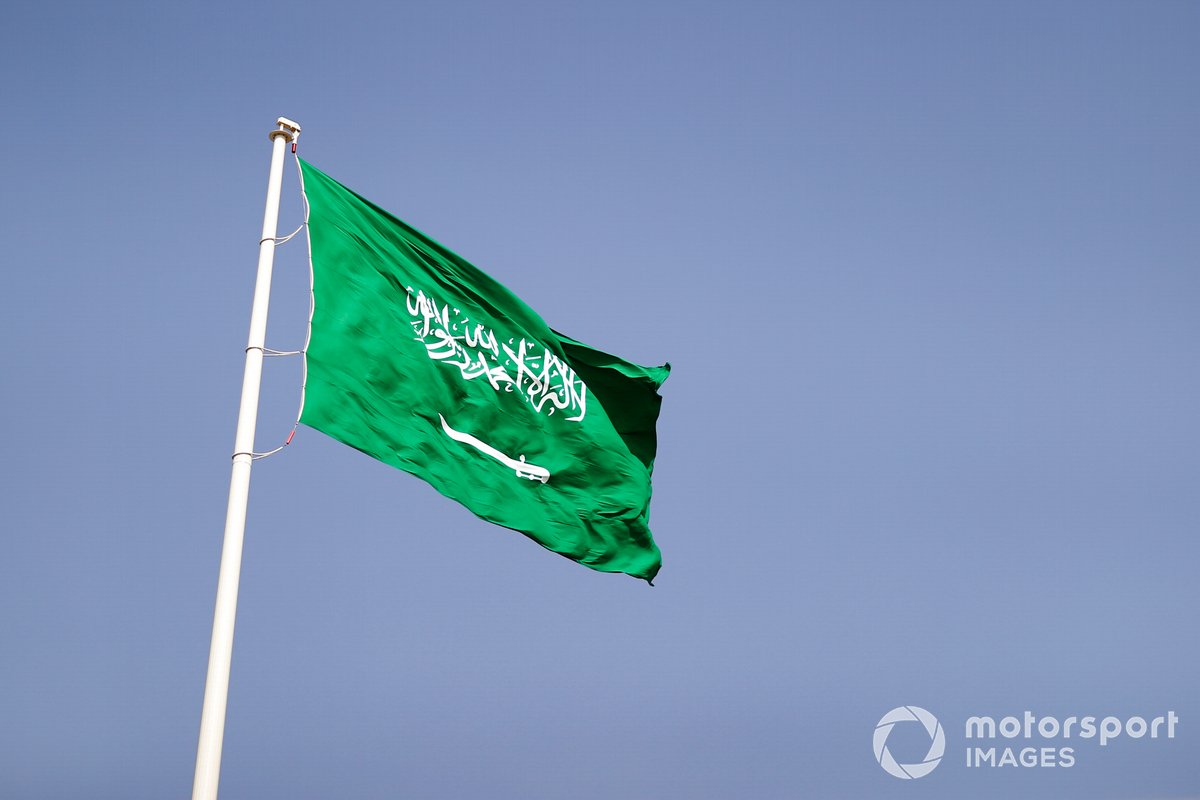 The flag of the Kingdom of Saudi Arabia