Haas has revealed that the only major parts not written off in Mick Schumacher’s $1 million Formula 1 Saudi Arabian Grand Prix qualifying crash were the survival cell and engine.

Schumacher had been bidding for a spot in Q3 at Jeddah when he lost control of his VF-22 at the exit of Turn 10 – with the car spinning around and smashing into the concrete wall on the outside of Turn 11.

It then slid down the track before striking the barriers on the other side of the circuit, and eventually came to a halt at Turn 12.

While Schumacher escaped injury in the accident and was released from hospital later in the evening following precautionary checks, his car did not escape so easily.

With all four corners impacted, and the gearbox falling off when it was lifted away by marshals, Haas was well aware that the damage bill would be high.

Subsequent investigation of the car in the Haas garage confirmed that almost nothing escaped intact.

Team boss Gunther Steiner said: “The chassis itself doesn't seem to be broken. The side infrastructure yes, but you can change them.

“Obviously we need to do a proper check on the chassis but it looks like it is not too bad to be honest.

“The engine also, I was told from Ferrari, seems to be okay. The battery pack as well. But then all the rest is broken!” 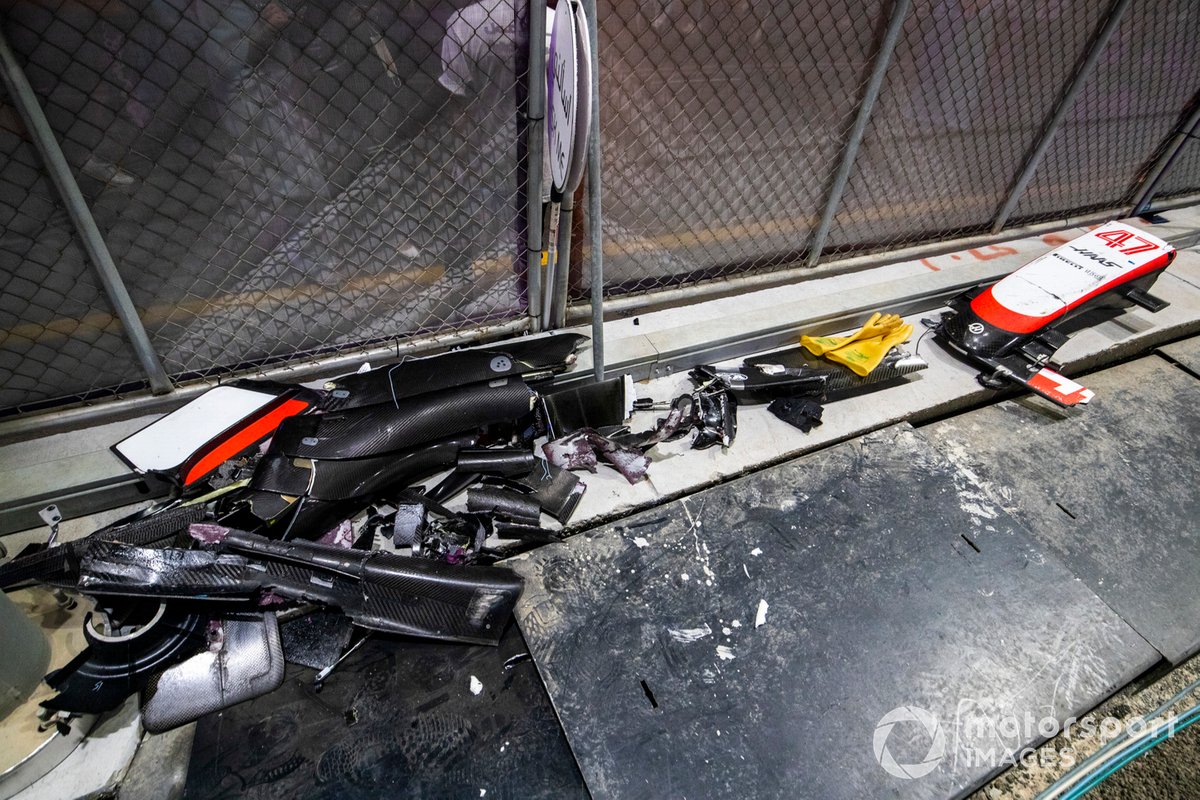 Debris from the crash of Mick Schumacher, Haas VF-22, on track

Asked what the likely damage bill would be, Steiner estimated that it could be as high as $1 million.

“I think the cost is pretty high because all the suspension is gone: except the front left. I think there is still something on there,” he added.

“The rest is just carbon powder. I don't know money-wise but, between gearbox, the whole bodywork is gone, radiators are gone - $500,000 to $1 million I would say.”

With F1 teams facing tight spending limits this year because of F1’s budget cap, Steiner said that teams have had to put a rough estimate of damage costs aside.

So while Schumacher’s crash has not affected things too much, a run of repeat incidents would cause a bit more of a headache.

“There's a nominal amount [set aside], but in a racing team, you never can stick to your budget like in a normal commercial business, because you have this risk,” he said.

“You have got obviously a contingency there. But if you have two or three like this: pretty quick your contingency is not there anymore.

“It's a loss. So you just need to manage. Obviously, I hope we don't have a lot more of them.”