Test driver Antonio Giovinazzi crashed early on in first practice, while Romain Grosjean struggled once again with brakes as well as a baffling balance problem throughout practice.

Grosjean and Giovinazzi were 16th and 19th respectively in first practice, while Kevin Magnussen was Haas's best representative in 17th in FP2 despite missing much of the session as the team repaired his car after Giovinazzi's crash.

"It is the most difficult one [practice] for Haas F1 - including last year," said Steiner assessing the team's Friday running.

"Ever. I don't think we ever struggled this much.

"The balance is all over the place, and we didn't have a second car to give us data because the second car was destroyed.

"Then it's going down in a spiral.

Steiner said Grosjean's woes has been so extreme that he had not had the time to get to the bottom of Giovinazzi's crash, or speak to the Italian at length before he departed for Maranello to run in Ferrari's simulator.

Reflecting on Grosjean's difficult day, Steiner said: "[He had] just no balance. One of these days with no balance.

"It goes from no grip from the front to no grip at the rear. It was just brutal today. It was brutal. It was miserable today.

"We are at the point where it's very difficult and then you fall back, as you see.

"We went out with our super-softs to try to do a qualifying run. Then everybody is on high fuel load and you get stuck in traffic. It is just a downward spiral.

"We will try to rescue what we can for tomorrow."

GROSJEAN SWITCHES BACK TO BREMBO BRAKES 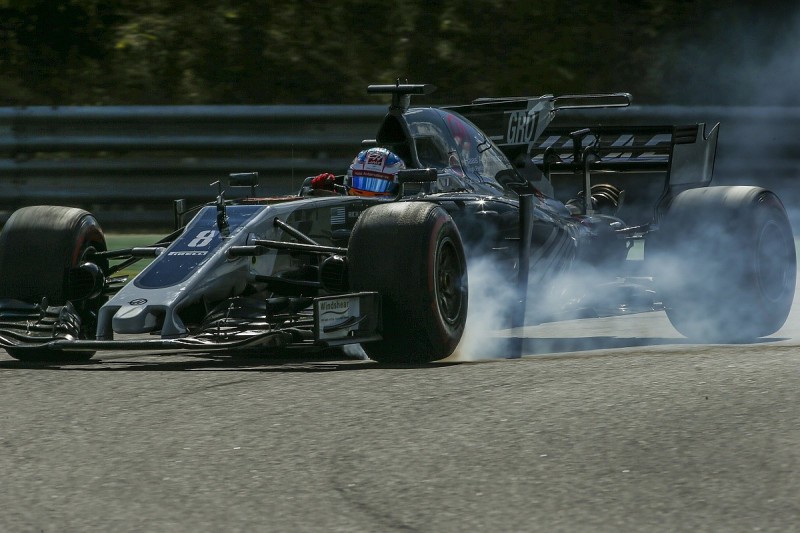 Grosjean's struggles with his brakes prompted him to revert to supplier Brembo, one round after he switched to Carbone Industrie.

After the team appeared to make good progress with its Carbone Industrie pads at Silverstone, Steiner said it was especially annoying that brakes had become a topic again.

"It is frustrating because in Silverstone we were happy, although Silverstone is not a brake circuit," he said.

"With all the trouble we have got, we have no time to develop brakes now so we just said: 'let's go back to Brembo and forget about a second set of CI or anything.

"We just need to be rational and try to get out of the hole we got ourselves in this morning."