Racing Point is just 10 points ahead of McLaren and 22 clear of Renault with millions of dollars of prize fund money riding on the final classification of the three teams in the constructors' world championship.

Racing Point made its task harder when it decided to give Sakhir Grand Prix winner Sergio Perez a new power unit for the last weekend of the season, committing to him to starting at the back.

However the team has taken a gamble with Stroll and kept a high mileage engine in his car for this weekend.

Stroll is out of sync on engine usage after he lost the use of a power unit in his heavy crash during the Emilia Romagna GP, obliging his third example of the season to do a lot of mileage in the remaining races.

He regained some miles when Friday was rained out at the Nurburgring and his car was absent from FP3 due to illness.

Stroll qualified eighth in Abu Dhabi, ahead of the two Renaults but behind the McLarens, with Lando Norris starting fourth and Carlos Sainz Jr sixth.

"I mean, we're surviving on engine miles this weekend," the Canadian told Autosport.

"Checo's got a new engine. Because of the puncture in Mugello, we hit the engine quite hard.

"That one was toast, and because we lost that one we had to get a new one, so this one's gone for quite a long time. 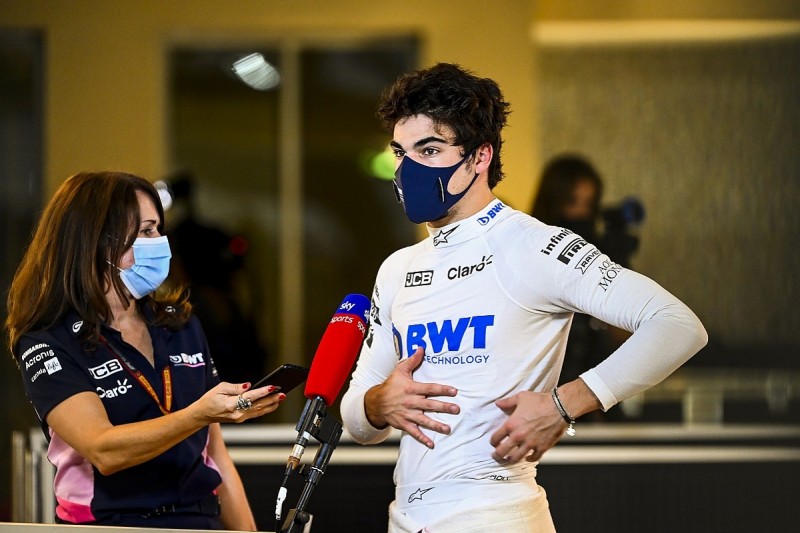 "Because I actually I think missed a session for COVID, I think we've managed to kind of eke it out until the end of the year. I don't want to talk too soon.

"We had a couple of races where we weren't sure if we were gonna change the engine or not and also we're really trying to drag it out to the end of the season.

"But it's a long race tomorrow, a lot can happen.

"We're in the fight with McLaren, and they're starting in a good position."

Stroll admitted that his lap times could be compromised in the race, because of the extra mileage his engine has completed.

"Maybe a tenth a lap or something - but it's racing, a lot can happen," he said.

"We have a quick car, good strategy, good start, so a lot could happen tomorrow."

Asked if he had nothing to lose from the back - having won last weekend after his first-lap incident and pitstop dropped him down the order - the Mexican said that wasn't the case.

"We have a lot of things to lose tomorrow," he told Sky F1.

"It still requires a very good race from our side, we have to make sure we get into the points, well into them, because the battle in the championship is very, very tight.

"So we have to make sure that we have a strong race tomorrow and make as much progress as we possibly can."

Perez revealed that knowing he would start from the back the team meant the team could concentrate its efforts into giving him a good car for the race.

"We'll see what we are able to do, but a lot of things can happen tomorrow."