Lance Stroll says he always shrugged off criticism of his performances as "just noise", after taking his maiden podium in his eighth Formula 1 start in the Azerbaijan Grand Prix

A fortnight after breaking his F1 points duck with ninth on home ground in Montreal, Williams's rookie signing kept his composure in a crazy Baku race to finish third - only losing second to recovering Mercedes driver Valtteri Bottas in a photo-finish over the line.

Asked if he thought the result would silence critics who felt he had been elevated to F1 too soon, reigning European Formula 3 champion Stroll replied: "I don't think it proves a point. I don't listen to that stuff, it is just noise.

"I am just happy with myself. It is all just noise in the background, I don't care."

Stroll becomes only the second driver in F1 history to take a podium finish while still a teenager, the 18-year-old 12 days older than Max Verstappen was when he broke that record by winning last year's Spanish GP.

"I am a bit lost for words," said Stroll.

"It was such an intense race, a crazy race, and so much happened, the red flag and hopping out the car and hopping back in and having to reset. It happened so quickly.

"Today where we did well was to stay out of trouble, let some other drivers make mistakes and get to the end.

"I can't describe how I feel, it is beyond amazing.

"Yesterday was quite amazing already, I had a few races where Saturdays didn't go well and got back into Q3 for first time since China, so today to get the podium is absolutely amazing." 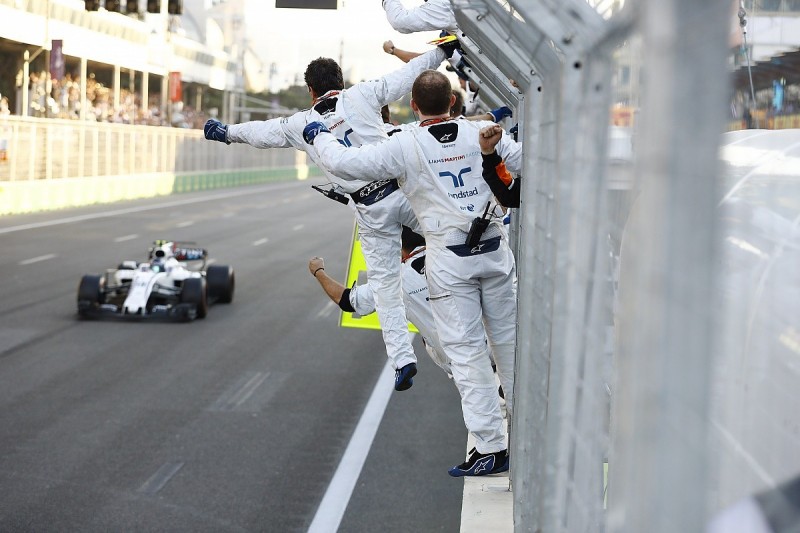 Stroll conducted a testing programme in a 2014-vintage Williams to prepare himself for F1 last season, and is continuing that into the first part of this year.

On Saturday Williams chief technical officer Paddy Lowe said a test in the 2014 machine at Austin after the Montreal race had helped Stroll make a set-up breakthrough.

"Sometimes jumping F3 to F1 is quite big and it took time to try to understand," said Stroll.

"We came back to it this weekend and I am as competitive as at the beginning of the season, like in Bahrain and China where I was in Q3.

"That set-up gives me more confidence with the car, I am able to drive the car now and push the car. It gives me confidence and comfort.

"I will keep working on things moving forward, it is not finished yet.

"I can improve a lot, it just takes a bit of time.

"This year is a very different formula for me and I need to experiece it, come back and figure this and that out."