During a qualifying simulation run on hypersoft tyres in the final half hour Ricciardo lapped in 1m39.711s, not only deposing Ferrari's Sebastian Vettel from the top spot but also obliterating his own fastest time from the equivalent session last year - a 1m42.489s.

Max Verstappen made it a Red Bull one-two, and Vettel's team-mate Kimi Raikkonen ended the session seven tenths of a second off the pace in fourth after losing track time to a car issue.

Nico Hulkenberg, trialling a new bargeboard on his Renault this weekend, was the best of the rest in fifth, albeit 1.394s off the pace, while neither of the Mercedes drivers attempted a fast lap on the hypersoft compound. Lewis Hamilton was sixth fastest, Valtteri Bottas eighth.

As the session got under way the Marina Bay circuit was still basking in the late afternoon sunshine and an ambient temperature of 32C. The track surface itself was a baking 43C.

Given the relatively unrepresentative nature of this daylight session, several teams demonstrated little urgency in taking to the track, and only eight drivers set timed laps during the first 15 minutes.

The track surface evolved markedly over the course of the session and the process accelerated as more cars joined the fray: Raikkonen's initial benchmark of 1m44.622s was over two seconds slower than Ricciardo's fastest lap in practice one last year, but by the time the session entered its final hour both Mercedes and both Red Bulls had smashed the 2017 time - without using the softest tyre compounds available.

Much of this improvement will have come through car and tyre development, since teams seldom chase set-up this early during a race weekend on a street circuit with a 'green' surface.

Both Raikkonen and Verstappen ran new MGU-H power unit elements, their third of the season, but Raikkonen managed just eight laps before a technical problem forced him to pit for what the team warned him would be "a long change". 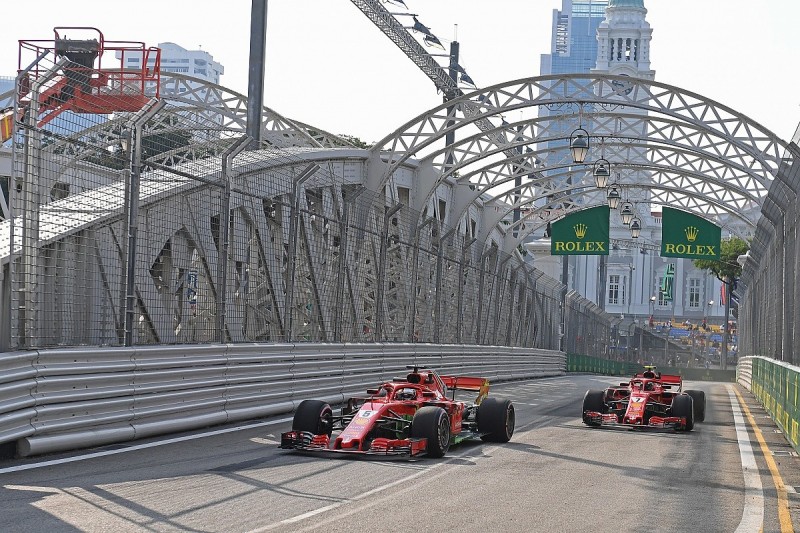 Vettel also spent much of the first hour in the garage, completing just 10 laps before he and Raikkonen returned to the track on hypersofts with 35 minutes to go.

Vettel duly rocketed to the top of the timesheets with a 1m39.997s, eclipsing Bottas's previous best of 1m41.669s on the softs, while Raikkonen had a brief off at the Turn 18 left-hander that heads under a grandstand, taking to the escape road

Ricciardo and Verstappen then emerged to run qualifying simulations on hypersofts, and both of them went quicker than Vettel, with a 1m39.711s and a 1m39.912s respectively.

All the while, the Mercedes pairing followed their own programme of long runs on the soft compound, though they were clearly hustling: Bottas made a brief excursion down the escape road at the tight Turn 14 that concludes the back straight.

Carlos Sainz Jr squeezed between the two Mercedes' times on his qualifying run on hypersofts, and Charles Leclerc was ninth fastest for Sauber before clipping the inside wall at Turn 3 and removing his right-front wheel just minutes before the end of the session.