Singapore GP: Mercedes has 'no explanation' for lack of pace

Following a run of 23 consecutive pole positions for Mercedes, reigning champion Lewis Hamilton and team-mate Nico Rosberg will start from fifth and sixth on the grid at the Marina Bay street circuit.

Hamilton finished 1.4s behind Sebastian Vettel as Ferrari claimed its first pole position for 61 races since the 2012 German Grand Prix.

Hamilton and Rosberg also find themselves behind Red Bull duo Daniel Ricciardo and Daniil Kvyat, who sandwich Kimi Raikkonen in his Ferrari to complete the front two rows of the grid.

Asked to explain his team's sudden lack of pace, Mercedes motorsport boss Toto Wolff said: "The moment we put the car on the ground in FP1 we seemed to struggle, and have gone backwards over the weekend.

"There are a lot of factors which have an influence, and we haven't really determined yet what the main contributor to that loss of performance is.

"It's still a very good car aerodynamically, so there is no explanation in the drop in performance of the car.

"Perhaps it's a combination of the mechanical grip we have been able to extract from the tyre, and that we haven't been able to put the car in the sweet spot of the tyre.

"To do that you need to have all the matrices right - ride height, camber, torque, pressure, temperatures.

"There is so much influence. This is a new one for us.

"And also what we have seen is a very impressive performance of Ferrari.

"They appear to have done a bloody awesome job on that one lap, and also Red Bull has found some pace."

Wolff also suggested the circuit is not to Mercedes' liking, in particular as last year the team "had the least margin" over its rivals and it is "a more difficult track for us than others". 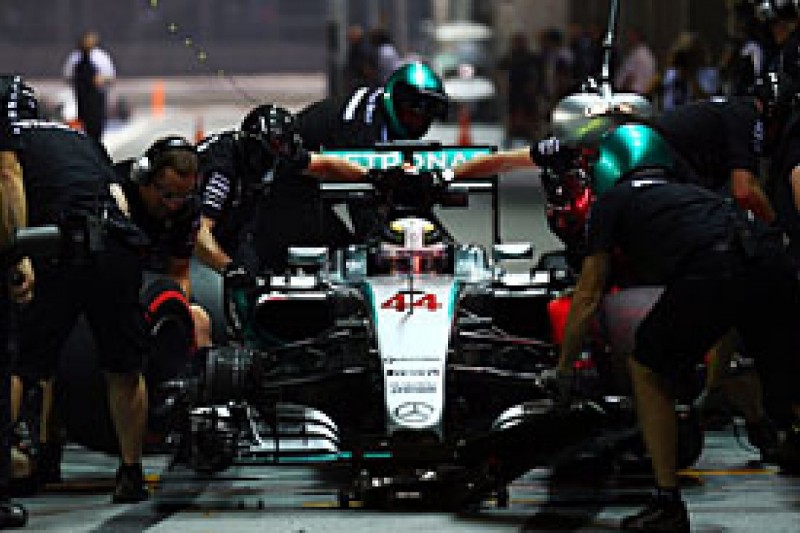 Hamilton added: "In actual fact it's not the set-up. It's just these tyres for some reason, for whatever reason, are not working on our car.

"The guys ahead have been quicker all weekend through every session, so you have to assume it's going to be the same tomorrow."

Rosberg knew he would be on the backfoot at the start of FP3 after losing time on his first run on the prime tyre, with the gap to the front leaving all in Mercedes "massively surprised".

"We didn't see this coming. We don't understand it for now," said Rosberg.

"We tried a lot of things this morning because we understood we had a bit of an emergency situation, but we didn't manage to make progress. We were lacking grip.

Honda could supply another F1 team in 2017 says McLaren's Boullier