Rosberg hit trouble before his car took to the track ahead of the race as none of the controls on the steering wheel - including the gears and clutch - worked as he tried to get it out of the garage.

Despite making it to the grid the problems could not be solved, and although the German managed to start the race from the pitlane he was forced to retire early on as his car hit further trouble.

Mercedes motorsport boss Toto Wolff said the problem was traced back to the steering column, but there was no explanation for why it had happened.

"It looks like a broken loom in the steering column, which was within the duty cycle and not towards the end of its life cycle," explained Wolff.

"It just shut the whole thing down.

"The only thing that worked was the gear change and then the radio came back. There was no hybrid energy any more, so when we called him in we changed the steering wheel, and tried to get it going but it wouldn't.

"The only way to get it going was to get first gear in at high revs, and this is when I said stop, we don't want to have a jack flying out of the rear of the car and hurting somebody.

"He was a minute down by then, so that was it."

Wolff said that the team was flying the failed parts back to its Brackley headquarters overnight so that a full analysis could begin on Monday.

Rosberg said the problems he experienced made his car undriveable, and reckoned the experience was his toughest of the year so far.

"None of the steering wheel functions worked, so I had no hybrid power, no DRS," he explained. 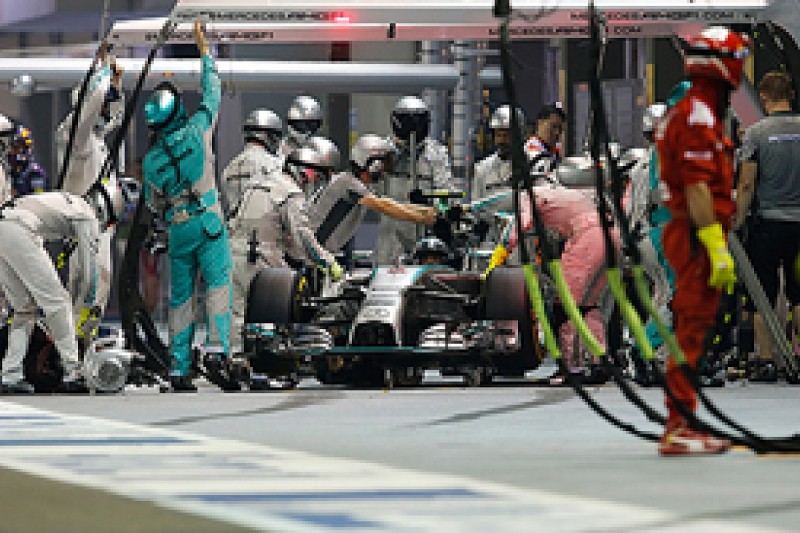 "The gear paddles sort of worked which was strange, but they would always up shift two gears at a time, so I had no fourth or sixth gear. It was just all over the place, and that's why I was slow.

"My brake balance was completely in the wrong place and I couldn't brake properly because I couldn't change that, so everything was all over the place.

"Even coming into the pitstop I didn't have a pit limiter I couldn't go into neutral, so I couldn't do anything.

"They were going to jack me up. I would have to go full speed then they drop the car and go, but they decided that was too dangerous.

"So that was all part of the day: the toughest day of the year for me."