Alonso started fifth on the grid but rose to second at the start, before being forced to cede a place to Sebastian Vettel's Red Bull having locked up at Turn 1 and driven across the run-off area.

The Ferrari jumped Vettel at the second round of pitstops, but conceded track position to both the German and his team-mate Daniel Ricciardo by pitting under the mid-race safety car caused by Sergio Perez's front wing collapsing.

Both Red Bulls stayed out until the end of the race, restricting Alonso to fourth, but the Spaniard refused to criticise Ferrari's decision to pit him under the safety car.

"I think the strategy was good," Alonso said.

"If we had the pace of the Mercedes the strategy was to stay out, because if you don't pit with the safety car and you have a two-second [per lap] advantage, you have the laps to open the gap and pit in front [of the others].

"But we don't have that pace. If we stay out and we don't open the gap like [Lewis] Hamilton we finish seventh or eighth.

"If you have Hamilton's pace probably then staying out pays off.

"The moment of the safety car was probably not good, but sometimes it helps and sometimes it doesn't help. Today it didn't help.

"Good race, good weekend and fighting with the leaders, which is a surprise for us, and hopefully we can continue." 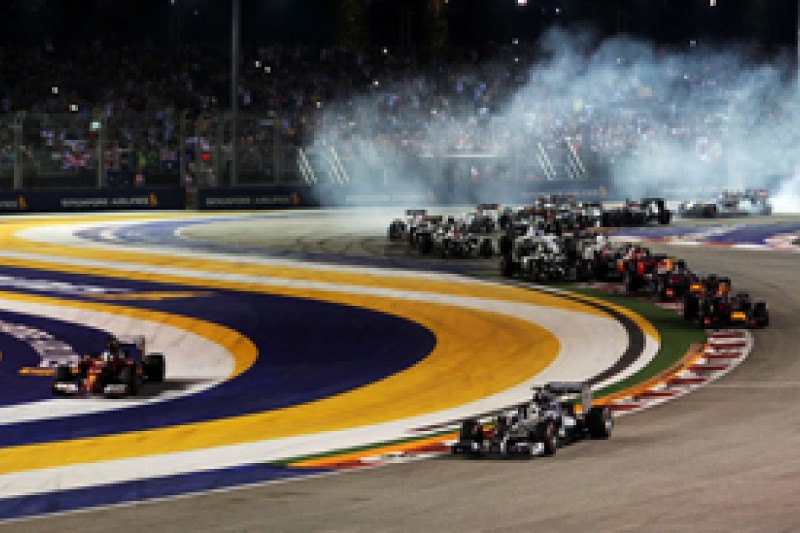 When asked by AUTOSPORT if his lock-up at Turn 1 after the start had cost him a shot at the podium, Alonso replied: "Again, if I lost the podium because Fernando locked up in Turn 1, it's OK."

MATTIACCI: FERRARI DID THE MAXIMUM

Alonso's team-mate Kimi Raikkonen also ceded ground in the pits, losing fifth to Felipe Massa's Williams at the first stops and then trailing home eighth having got bottled up behind the sister Williams of Valtteri Bottas after pitting under the safety car.

When asked by AUTOSPORT what cost Ferrari a podium in Singapore, Mattiacci said: "I don't think there was something specific.

"Definitely the safety car didn't do any better for us, but the race is made of 60 laps.

"We squeezed the car as much as we could; the strategy from the pits was excellent.

"There were other variables we know we cannot control. We did our best."