Sebastian Vettel has admitted that he is his own "biggest enemy" in stopping Ferrari winning the 2018 Formula 1 world championship, amid a number of a driving errors

The German has a 30-point deficit to Lewis Hamilton in the standings, having seen a number of opportunities to win grands prix this year slip through his grasp because of mistakes.

In Azerbaijan he locked up as he tried to take the lead after a safety car restart and fell to fourth, in Germany he crashed out of the lead and in France and Italy he tangled with rivals.

With Ferrari widely believed to have produced the fastest F1 car for much of the season, Vettel confessed he is the weakest link that could stop it overhauling Mercedes.

"I think it's pretty straightforward for me," said Vettel ahead of the Singapore GP. "I think the biggest enemy is me.

"We have a great car. Obviously he's [Hamilton] the leader at the moment so he's the one to beat, but I think we have all the chances.

"How much they could be better by now and so on is a different question, but we still have a very, very good chance.

"And, as I said, we will be our first enemy and not him as a person or them as a team.

"I think we need to look after ourselves, and if we do that then we have a good chance to do well, to win races and things look good." 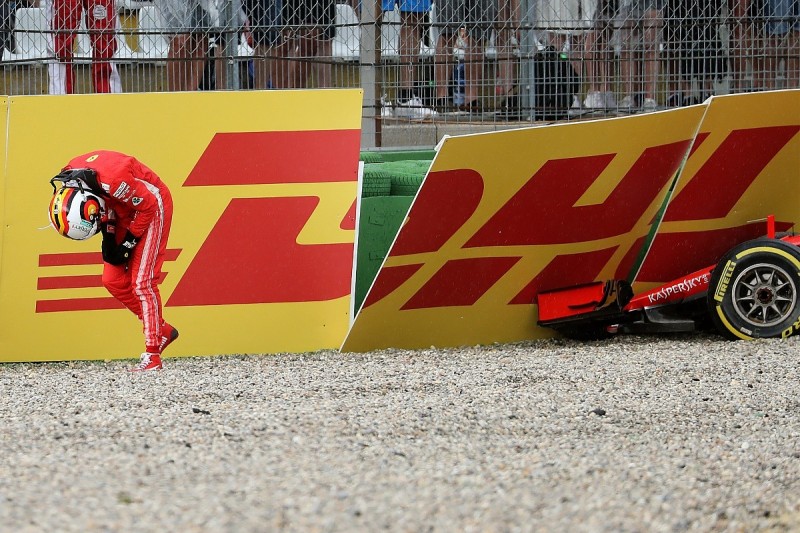 Vettel insists he has not dwelled too much on the lost opportunities this season, although he says that at the time things have been difficult to deal with.

Asked if he unsatisfied with the job he had done this year, Vettel said: "Nowadays no, but on the day it's a different story.

"I think it's normal that if you do a lot of races in some you feel you should have done better for various reasons, but there were also other races where we shouldn't have done so well and we did.

"For sure the worst one was Germany, but I think the most important is that I know what happened and I can explain it. And then everybody can have their own views and so on on what happened.

"I would have loved to win in Germany but I'm not too bothered.

"I'm generally looking forward and not focusing on what we could have done differently to avoid what happened."