The 1985 San Marino Grand Prix is part of Formula 1 folklore, with three different leaders in the last five laps - none of whom actually won. Thirty-five years later, it still sticks in the mind of Alain Prost's engineer, Autosport technical expert Tim Wright

Elio de Angelis' second and last grand prix victory at Imola on this day in 1985 came in somewhat fortuitous circumstances and without leading a lap, but was the result of a lesson he'd learned the previous year.

Imola was renowned for being tough on fuel consumption, and this rang true in 1984 when de Angelis' Lotus was one of three cars to run dry - although the Italian still managed to salvage a podium finish. Come the third round of 1985 at Imola, he was determined to play a cannier game.

De Angelis arrived at Imola fourth in the standings, following up a podium in the Brazilian GP with fourth place in a sodden Portuguese GP, won in virtuoso style by his Lotus team-mate Ayrton Senna.

Senna was in buoyant mood after his first F1 win, and had cast the events of the previous year's San Marino GP - the only race he ever failed to qualify for due to a tyre dispute between his team and Pirelli, and an engine problem when it mattered - firmly to the back of his mind.

"My car is good, there has been an improvement since Portugal," Senna declared, and duly confirmed this in qualifying by topping both days to claim pole by a mere 0.027 seconds from the Williams-Honda of Keke Rosberg. But Senna was well aware that there was still plenty to play for.

"Pole isn't so important here at Imola than at some other tracks," he warned. "It will be a long hard race; hard on brakes and fuel consumption." 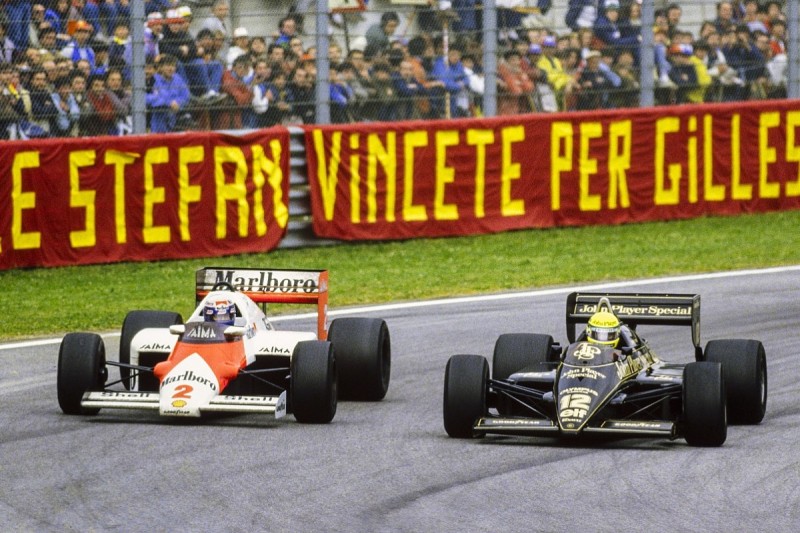 The F1 rules of the day were for 1.5-litre turbocharged engines that had the capacity to be the most powerful - and most thirsty - the category has ever featured. There was a strict fuel limit of 220 litres, however, so teams had to factor their useage into race strategy.

Prost's race engineer Tim Wright takes up the story: "Even when we got to Adelaide in '86, we were still having problems with the fuel metering, so in '85 it was all very new," he says.

"Bosch were developing the system to work out exactly how much fuel we were using and we knew Imola was going to be tight anyway. The whole approach to the race was we were going to have to take it fairly easy and just see how things panned out, we were advising Alain of the pace he should be maintaining."

The warm-up at Imola had been held in wet conditions, compromising the teams' running in race specifications. So the grand prix would be a venture into the unknown for all involved.

Senna darted off into the lead, setting a high tempo for the others to follow. Despite a mid-race attack from Prost, the Brazilian was over 10s clear when his Lotus began to suffer fuel starvation, and Senna was forced to pull over on the run to Tosa with four laps remaining.

Senna said: "It was a pity because it had been a good race. Prost was faster than me on the straight, but other than that we were in good shape."

His demise promoted Ferrari's Stefan Johansson into the lead, sending the tifosi into raptures as he'd charged up from 15th on the grid in his second start for the Scuderia. Alas, the Swede suffered an electronic issue which gave a false fuel reading, and he too ground to a halt after one glorious lap at the front. 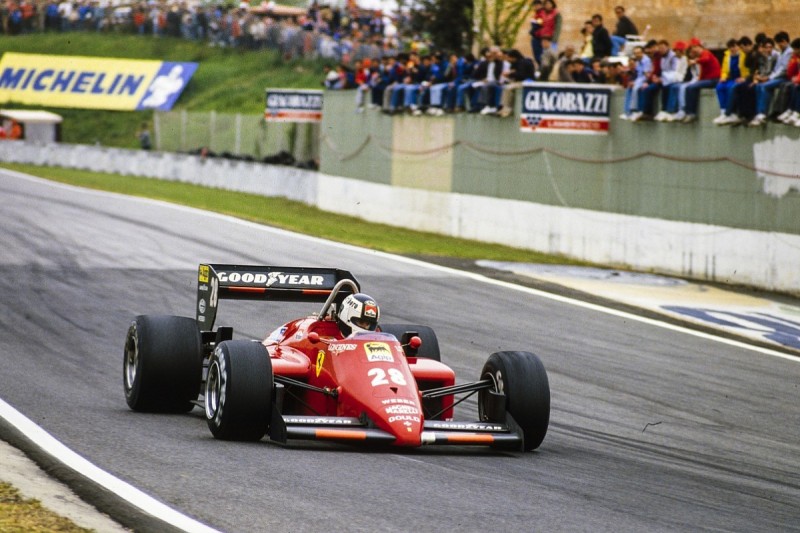 That handed the lead to Prost, who had been saving fuel and short shifting around the final laps to claim what looked to be an easy victory. The MP4/2B ran out of fuel at Variante Alta on the slowing-down lap, so it appeared he had eked out his fuel to perfection. But the car was found to be 2kg under the minimum weight limit (including 2kg tolerance) in post-race scrutineering.

"The reason that the car was underweight at the end was maybe my fault," recalls Wright.

"Already in Rio, when we'd measured the car at the end of the race, it was just bang on the weight limit.

"The car was light, [John] Barnard did a superb job of designing it down to the weight limit, so we knew it was going to be tight. But what we didn't account for was any loss of fluids and the rubber obviously, because Imola is quite abrasive.

"We tried arguing the toss, 'we should be able to add a bit of water or oil' and they said, 'no, that's it, you're underweight and that's it'. Maybe if he'd come in a couple of laps before the end and put fresh tyres on, we would have been alright. But as it happened, we had no idea that it was going to be that close. We just miscalculated."

Prost had thumbed a lift home from Patrick Tambay, sitting on the Renault's sidepod, and duly took his place on the podium before the scrutineers made their discovery that would disqualify the winner.

With Prost excluded, de Angelis inherited the victory - his first since Austria 1982 when he had narrowly beaten Rosberg to the flag at the Osterreichring - although it took two hours (and multiple sets of scales) for the stewards to persuade McLaren boss Ron Dennis that Prost's car was too light to be legal.

Yet rather than for Dennis's reaction, Wright's overriding memory is of his interaction with Lotus team manager Peter Warr when they went down to scrutineering.

"I knew Peter Warr from the Fittipaldi days, but I can't get out of my head this image of him standing there screaming at me, 'you f***ed up, you don't know what you're doing' and I couldn't believe a guy like that was being so vehemently rude in front of all these people at me," Wright recalls. 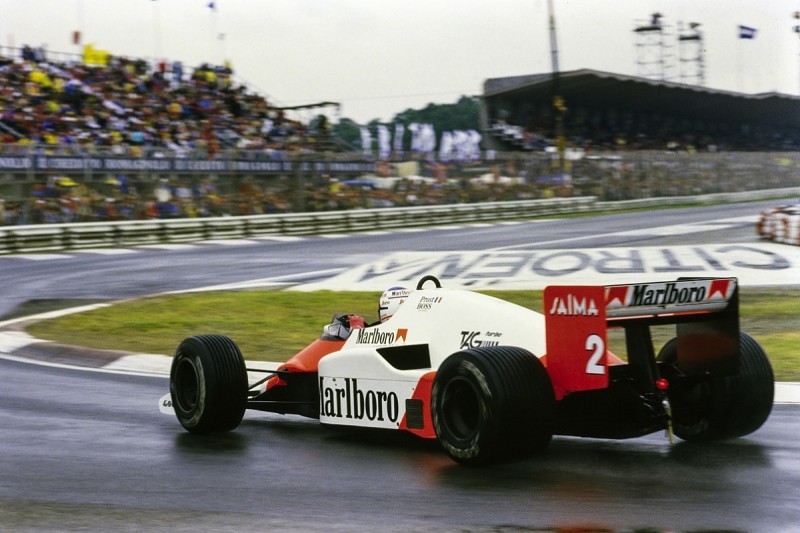 "Ron was one of these guys who didn't ever haul you over the coals for something like that. He's a racer, he knows these things go down and he said 'make sure it doesn't happen again'. Barnard was probably a bit more pissed off than Ron, but I don't remember his reaction. The thing that sticks in my mind was how Peter Warr reacted, which just amazed me."

For his part, de Angelis - who had crossed the line over 38s behind Prost - didn't take all the credit for making his fuel last until the end.

"The engine decided to turn the boost down itself, that probably helped me finish," he admitted. "Later I turned it up and it was good, but in the end I had a brake fire and no brakes at all for the last three laps."

It would be de Angelis's final F1 win. He left Lotus at the end of 1985 for Brabham, and was killed while testing at Paul Ricard the following year.

Boutsen was classified second, scoring his first F1 podium despite running out of fuel and pushing his car across the finish line, one lap down. Tambay finished third, just failing to pip Boutsen's leg-powered Arrows, while reigning world champion Niki Lauda - who'd been struggling with the gearbox of his McLaren - Nigel Mansell (Williams) and Johansson, despite not seeing the chequered flag, completed the scorers. 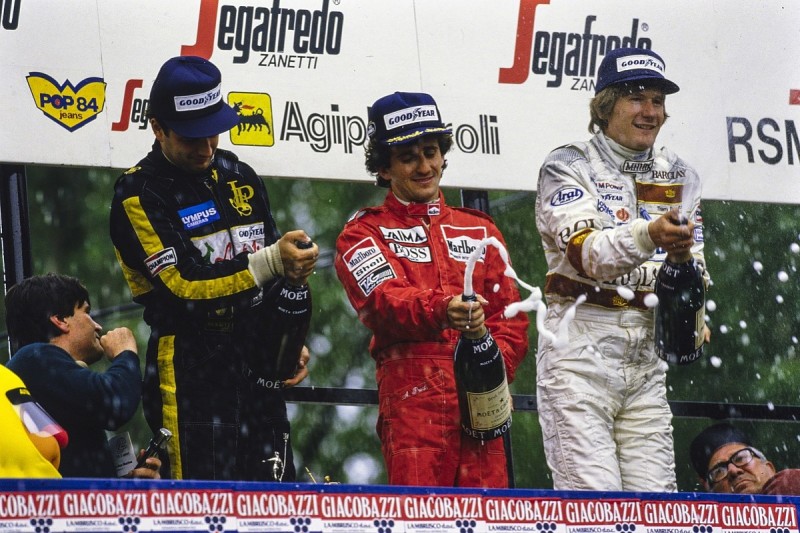