Sainz explains "strange scenario" of unlapping himself in Styria

Carlos Sainz said Ferrari had to message Mercedes to get around the "strange scenario" of having to unlap himself against Lewis Hamilton in Formula 1's Styrian Grand Prix.

The Spaniard was locked in a tight fight with McLaren's Lando Norris for fifth place in the Red Bull Ring race, but their battle was interrupted when Sainz got held up when he was lapped by Hamilton.

Having been forced to let the second placed-Mercedes through after a switch to hard tyres, Sainz quickly found himself being backed up as the world champion was struggling for pace.

Unsure about what to do, as Norris was pulling away in front of him, Sainz said that Ferrari had to use a radio message to make Mercedes aware that it needed to come through.

"It was a very, very strange scenario," explained Sainz. "I came out of the pits on the hard and was really looking forward to going to catch Lando, because we had the pace.

"Unfortunately I had to let Lewis by, because I got blue flags while I was getting the hard up to temperature, and then from there on I expected Lewis to pull away. 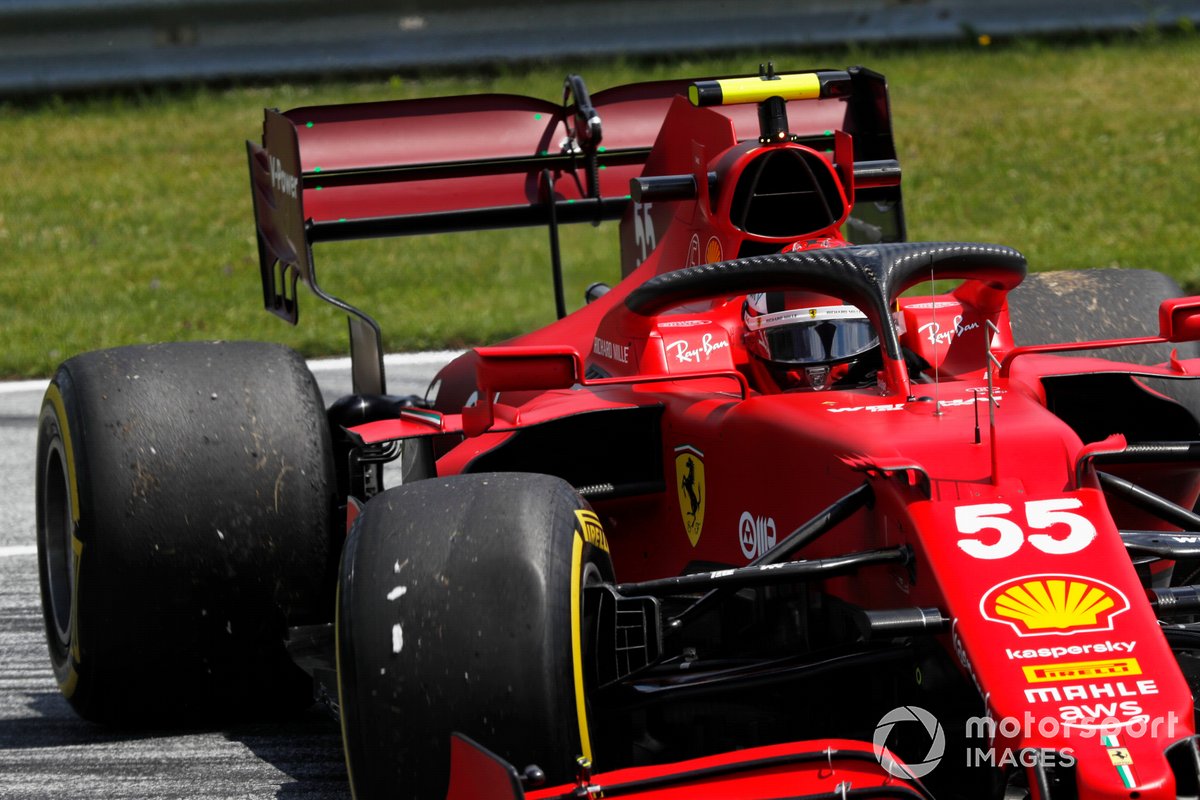 "But, for some reason, Mercedes was struggling a bit with tyres and I was quite a bit quicker than him. I also didn't want to do anything stupid as I know he's fighting for the championship and he's in P2 in that race.

"I didn't want to compromise his race either, but at the same time I was getting a bit impatient because I could see that we were not catching Lando, and that he was not going to lap Lando.

"So at some point, together with my team, we found a way to transmit to Mercedes that it would be very nice of them if they could let us by. I got within the DRS and then they let us by and I could start chasing Lando again.

"But I did lose 15 laps behind Lewis that were quite important for us to at least mount a charge and put Lando under pressure. So yeah those 15 laps behind him, killing the front tyres, trying to get within DRS, were not ideal."

On the team radio, Sainz asked his Ferrari pitwall if they could speak to Mercedes and request that Hamilton move over.

He asked: "Can you not talk to Mercedes and tell them I will pull away please?"

Ferrari confirmed that it would see what it could do and shortly afterwards Ferrari told Sainz: "You can try to unlap yourself."

Sainz then questioned whether it would be too risky to try, while Hamilton was informed by his pitwall that they were happy to let Sainz go through.

Ferrari then told Sainz that Hamilton had been told to let him by, as he went on to unlap himself.

After waving thanks to Hamilton as he moved ahead, Sainz then said: "I owe Lewis one, thank you guys."

Although Sainz failed to catch Norris and come home in sixth, he felt the overall performance had been perhaps his best of his season so far.

"In clean air we managed to start lapping at a very competitive pace, even more competitive than the McLaren, and very close to the leaders," he said.

"Since then, the feeling with the car has been amazing and it has been in general, just analysing quickly, probably my most complete race since I'm in Ferrari.

"The whole pace management and tyre management, I'm quite proud about that one."