The Mercedes duo were once again the pacesetters throughout most of the hour-long session, with Hamilton heading his team-mate Nico Rosberg by 0.290 seconds.

Hamilton ended the practice period in the pits after he spun at the penultimate corner on the lap (pictured below), seven minutes from the chequered flag. After the spin Hamilton was able to nurse his car across the circuit and into the pitlane.

The main interloper at the top of the timesheets was Valtteri Bottas in his Williams. At one stage he was the quickest runner in the field and ended up splitting the Mercedes drivers. He ultimately finished third overall.

Red Bull's Daniel Ricciardo was next up ahead of the second Williams of Felipe Massa.

The partisan crowd would have been delighted with the performance of Russian Daniil Kvyat. He was third behind the Mercedes mid-way through the session and finished the hour-long period with the sixth fastest time.

Drivers continued to struggle on the new low-grip surface at the new Sochi Autodrom and in particular a few racers ran wide at the tricky right-handed Turn 4.

Sebastian Vettel set the 10th quickest time, but he appeared to struggle with the grip levels, running wide at number of times throughout the session.

Kimi Raikkonen was seventh, one place ahead of his Ferrari team-mate Fernando Alonso. 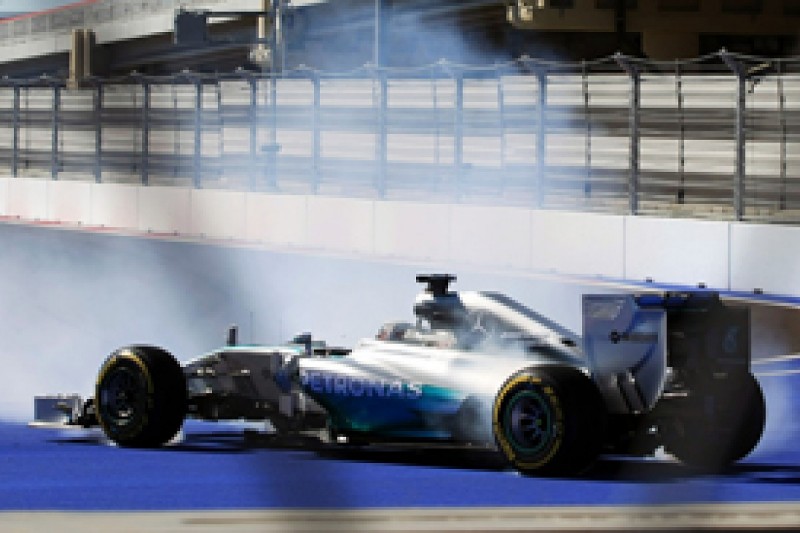 The session was red-flagged on the 18 minute mark after Kevin Magnussen brought his McLaren to a stop heading into Turn 4.

On the radio he complained of either a puncture or suspension failure and replays showed how he skilfully managed to keep his car off the wall around Turn 3.

Pastor Maldonado could only manage an installation lap after a problem with the energy recovery system on his car.

To compound his misery, the Lotus driver goes into qualifying with a five-place grid penalty for an engine change that has been carried over from Suzuka.

Nico Hulkenberg also goes into qualifying with a five-place grid penalty for a gearbox change.

The Sochi circuit was bathed in warm sunshine for the lunchtime session and the good weather is set to continue for the rest of the weekend.

Mercedes suggests it will not support F1 engine unfreeze