The world championship leader was the only driver to dip under the 1m40s barrier, putting in a best lap of 1m39.630s to take top spot by a massive 0.864s at the new Sochi circuit.

Hamilton had been outpaced by Mercedes team-mate Nico Rosberg by over two tenths of a second when everyone was on the slower medium-compound Pirellis early on.

But after a conservative lap on his first flier on the softs, he took the top spot on his second attempt before further extending his advantage on his final flier, aided by the durability of the tyres that meant drivers could attempt multiple fast laps.

He was the fastest driver in all three sectors of the lap, underlining his advantage.

"I think it's been good," said Hamilton. "I feel comfortable learning new circuits. Growing up it's a skill you have to learn quite quickly. It's the same for everyone. The car's been feeling really good today.

"The McLarens are very close, which is good for everyone, to be having a race. The track was getting grippier and grippier, rubbering in quite a lot - and there's a nice flow you get on this track. I'm really enjoying it."

McLaren built on its strong showing in the morning practice session by setting the second-fastest time, although it was Kevin Magnussen who led the way rather than morning star Jenson Button.

Magnussen did hold top spot at one stage before being relegated by Hamilton, but he was able to split the Mercedes.

Rosberg did look set to go at least second fastest before making a mistake on what should have been his quickest lap, running wide at the penultimate corner.

This meant he ended up nine tenths slower than his team-mate, with Ferrari's Fernando Alonso jumping ahead of him into third place on his third flying lap having left his soft running late.

"It was a good day technically from the engineering perspective," Rosberg said. "It went a bit wrong with my car.

"We tried two different things as a team and my thing didn't work out. We need to go back on that tomorrow. Other than that OK. It's a difficult track to get right."

Valtteri Bottas was fifth fastest, recovering from a difficult morning during which he was only able to run on one set of rubber thanks to a problem with the tyre blankets ruining his planned second set of Pirellis. 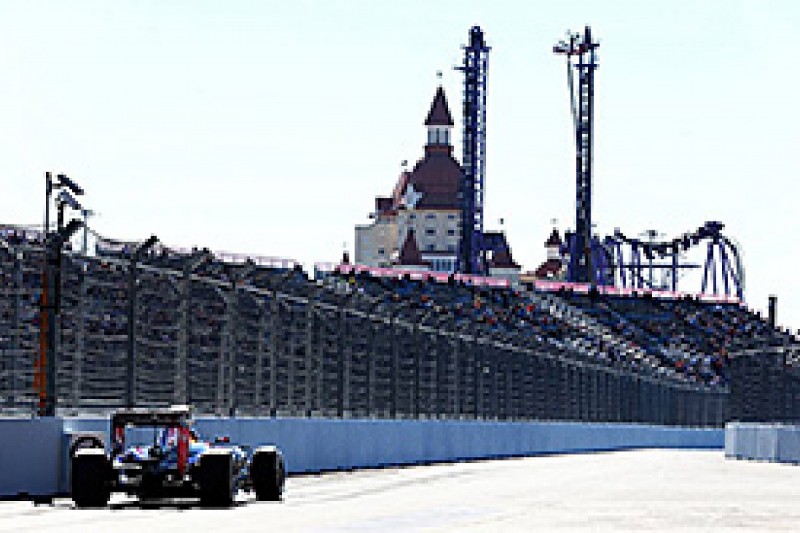 Felipe Massa, in the second Williams, was seventh fastest, just over a second off Hamilton's pace, ahead of home hero Daniil Kvyat.

Sebastian Vettel, who complained of a lack of power, which the team suggested over the radio was actually caused by a headwind, was ninth fastest after also leaving his quick run late.

The Australian stopped on track with eight minutes remaining and triggering a five-minute red flag, with most drivers heading back out for brief runs when the session was restarted.

Sauber prevailed in its ongoing battle with Lotus, with 15th-placed Adrian Sutil comfortably ahead of Romain Grosjean and Pastor Maldonado.

But Grosjean complained of a problem with the rear of the car, which was hindering him even though he was able to continue.

Esteban Gutierrez was down in 18th on his first experience of the Sochi circuit having missed the morning session to allow Sergey Sirotkin to run.

He ended up ahead of Caterham's Marcus Ericsson and Max Chilton, driving the lone Marussia with Jules Bianchi's car left in the garage.

Kamui Kobayashi, who also missed the morning session, with Spaniard Robert Merhi taking over, was slowest, over five seconds down.