The Mexican made an early pitstop under the safety car for Romain Grosjean's heavy crash, then rose up the order as others stopped and he tried to nurse his soft tyres through three quarters of the Sochi F1 race.

Although Sebastian Vettel, Kimi Raikkonen, and Valtteri Bottas all overtook him, Perez moved back up to third when the two Finns collided on the final lap.

"If you look at my performance, you can see I'm going through the best moment in my career," said Perez.

"I was confident going into the race. I was not expecting a podium at all, but the race started quite well.

"When we had the second safety car, we were one of the few cars to box.

"At the restart I was stuck behind Felipe Nasr and [Felipe] Massa, so I decided together with my team to save my tyres and it worked really well.

"We have a lot of momentum with us and I hope we can maintain it through to the end of the year."

Though his strategy ultimately paid off, Perez admitted he was in no shape to fight with the faster cars that had pitted later as they attacked him.

"It was difficult to hold them back, Valtteri and Raikkonen," he said.

"At this stage, where my tyres were, I could not brake late because I was risking flatspotting them, so there was a certain level of risk I was able to take.

"I said 'OK, if it's not a podium, let's get the points'. Then they had contact and we came back, which is great."

Force India had started with both cars in the top 10 after Nico Hulkenberg and Perez qualified sixth and seventh, but the German spun on the first lap while attacking the Ferraris into Turn 2.

He was then collected by Max Verstappen and Marcus Ericsson, ending his race and the Sauber's immediately.

"Braking for the second corner, I locked the rear wheels which ultimately then made me spin into Turn 2," Hulkenberg explained.

"Standing in the middle of the track on lap one with the whole field behind you is not ideal.

"It was difficult for Ericsson to avoid me and we ran into each other and were stuck."

"One of those things when you're in the wrong place at the wrong time," he said.

"My start was really good, I was making up places down to Turn 2, focused on getting a good exit and then Nico was just there in the way." 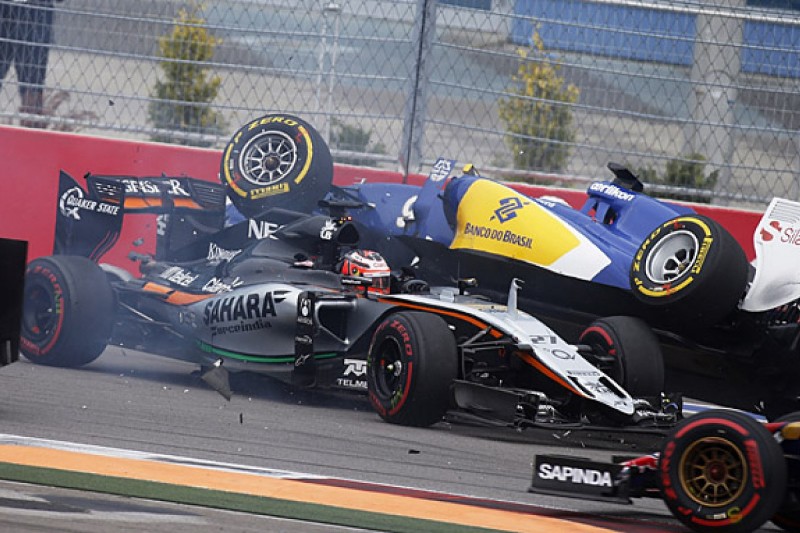