George Russell says the German Grand Prix was a missed opportunity for him to score his first Formula 1 points, with Williams making "the wrong choice" with its pit calls

Under the penultimate safety car Russell occupied 13th position, ahead of Lance Stroll, who elected to pit for slicks as the safety car began its final lap on lap 45.

Stroll was immediately able to bring his tyres up to temperature on the restart and, after a flurry of pitstops as the field change intermediate tyres for slicks, had risen to second place - momentarily leading.

The Racing Point driver managed fourth place as a result, and Russell felt that a similar result was possible had Williams granted him his request to stop at the same time as Stroll.

"We had the opportunity to go onto slicks under the last safety car when I was ahead of Lance.

"I wanted to pit, but I probably wasn't forceful enough to tell the team to pit for slicks.

"For some reason we decided to stay out and, next thing, we're pitting one lap later and Lance is up to P2.

"So it could have been so much more." 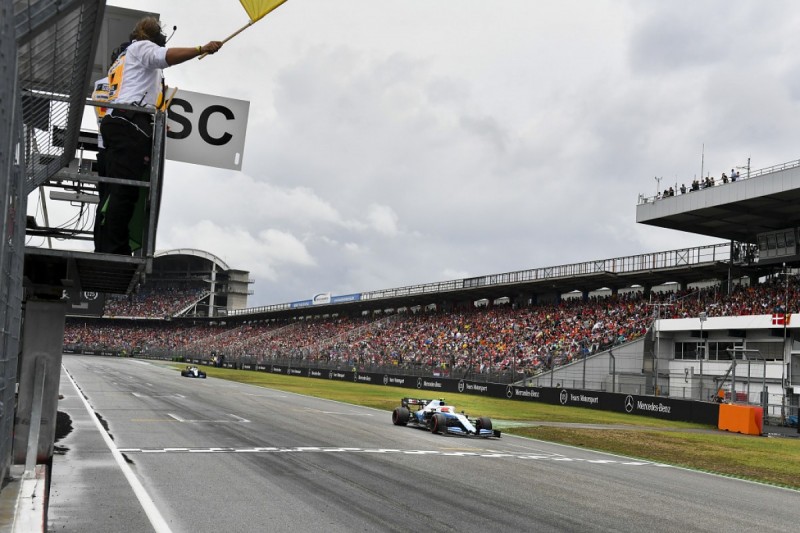 Williams did end up with a point in the end, after a post-race 30-second penalty for Alfa Romeo duo Kimi Raikkonen and Antonio Giovinazzi promoted Russell's team-mate Robert Kubica up to 10th.

Russell struggled in the variable conditions in the race, finishing in last place overall after a "driver error" allowed Kubica to pass him on lap 51.

Still suffering from a chronic lack of downforce, the beleaguered FW42 was derided by Russell as "really poor in all conditions", and admitted he understood the lower-risk nature of Williams's strategy calls.

"It was extremely challenging, but I think it was from our own doing really," he added.

"It was challenging for everyone but I mean, it just felt like driving on ice in all conditions.

"For some reason we stayed out but I understand the position the team were in, probably why we chose to do that, and you know everyone is struggling to keep on the black stuff.

"We're not in a position to throw something away like that.

"But we were ahead of Lance when he pitted under the safety car and we didn't, and he ended up coming out in second, so it proves we made the wrong choice."]

"It's probably the least satisfying race and weekend we've had all year."

Piola: Haas's package conundrum has no end in sight