Russell: Fighting Vettel in F1 showed me where I can improve

With Russell's Williams team having made good progress, and Vettel struggling in a difficult Ferrari, the two drivers ended up fighting each other on track quite a bit during 2020.

And Russell reckons that the experience of seeing how the four-time champion reacted in the heat of battle was a great learning experience - alongside the other tussles he had with Haas and Alfa Romeo drivers.

"I've improved as a race driver, drastically, because we were in wheel-to-wheel battles all season with Alfa Romeo, Haas, and often with Vettel," Russell told Autosport in an interview as he reflected on last season.

"I was talking about it recently, and Sebastian, he is probably the driver who I battled with the most this season.

"When I think back to the Nurburgring, to Mugello, to Austria at the start of the year. Even Abu Dhabi [there were] a few laps battling. Portimao, maybe? Imola, maybe? We've just been together on track the whole season, which, if you told me that the middle of last year, I'd have thought you were absolutely bonkers. 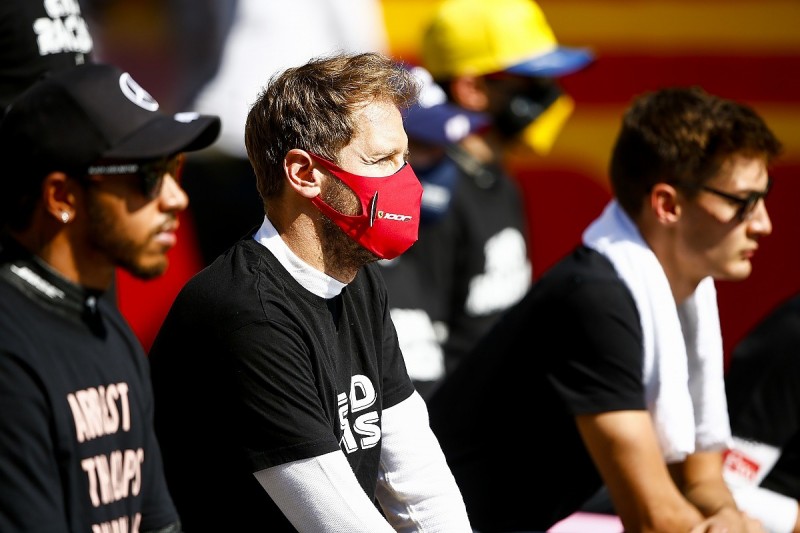 "So that experience, wheel-to-wheel racing in a Formula 1 car, has helped me so much - because it is different. It's so different to the junior formulas, purely because the downforce is so sophisticated.

"When you lose downforce, the car transforms. And learning how to cope with that and deal with that has been great for me. Obviously, it gave me that opportunity when I jumped in the Mercedes to really be on it when I was coming back through the field."

PLUS: Why Russell's killer instinct points to a strong future

Russell said that the learning experience in 2020 was especially valuable because he often found himself, thanks to brilliant performances in qualifying, higher up in the races than the pace of the car would normally justify.

Asked where he thought he needed to improve heading in to 2021, he said: "We often found ourselves out of position and battling with faster cars, which naturally makes it tricky, because I'm always on the defensive.

"I've only had it once that I was on the attacking front. And that's when I was in the Mercedes. That just transforms your confidence as a race driver.

"So, I'm equally realistic knowing that [because] we are one of the two slowest cars, it's always going to be difficult racing because you just don't have the same grip as the other teams. But it's small details, just trying to continuously work on [improving]."

The ethos change behind Williams' bid to move forward