McLaren's Daniel Ricciardo has set the fastest time on the second morning of Formula 1 pre-season testing in Bahrain, as Lewis Hamilton and Mercedes lost more mileage after a spin.

Shortly past the halfway point in the four-hour morning session, Hamilton lost the rear of his Mercedes W12 in Turn 13 and slid backwards into the gravel trap.

Hamilton got beached, bringing out a 15-minute red flag and forcing the world champion to have his car towed back to the pitlane.

Hamilton returned to the track before the start of the fourth hour and recovered to turn a healthy 58 laps, but the incident meant Mercedes lost more precious track time after team-mate Valtteri Bottas only managed six laps on Friday morning due to a gearbox issue.

The seven-time world champion was one of many drivers to go adrift on the ever-dusty Bahrain International Circuit, with Williams driver Nicholas Latifi spinning off at Turn 7 and Ferrari's Carlos Sainz Jr also going for an off-track excursion.

At the top of the leaderboard, Sainz had put down a first marker with a 1m33.072s lap on mediums.

Alpine's Fernando Alonso, who made his first appearance since fracturing his jaw in a cycling accident, soon dipped below Sainz's time with a 1m32.769s on hard tyres.

Alonso and the man he replaces at Alpine, McLaren's Ricciardo, then traded fastest times during the second hour. Ricciardo, who was also fastest on Friday morning, reclaimed top spot with a 1m32.215s on mediums, one tenth quicker than Alonso's best lap. 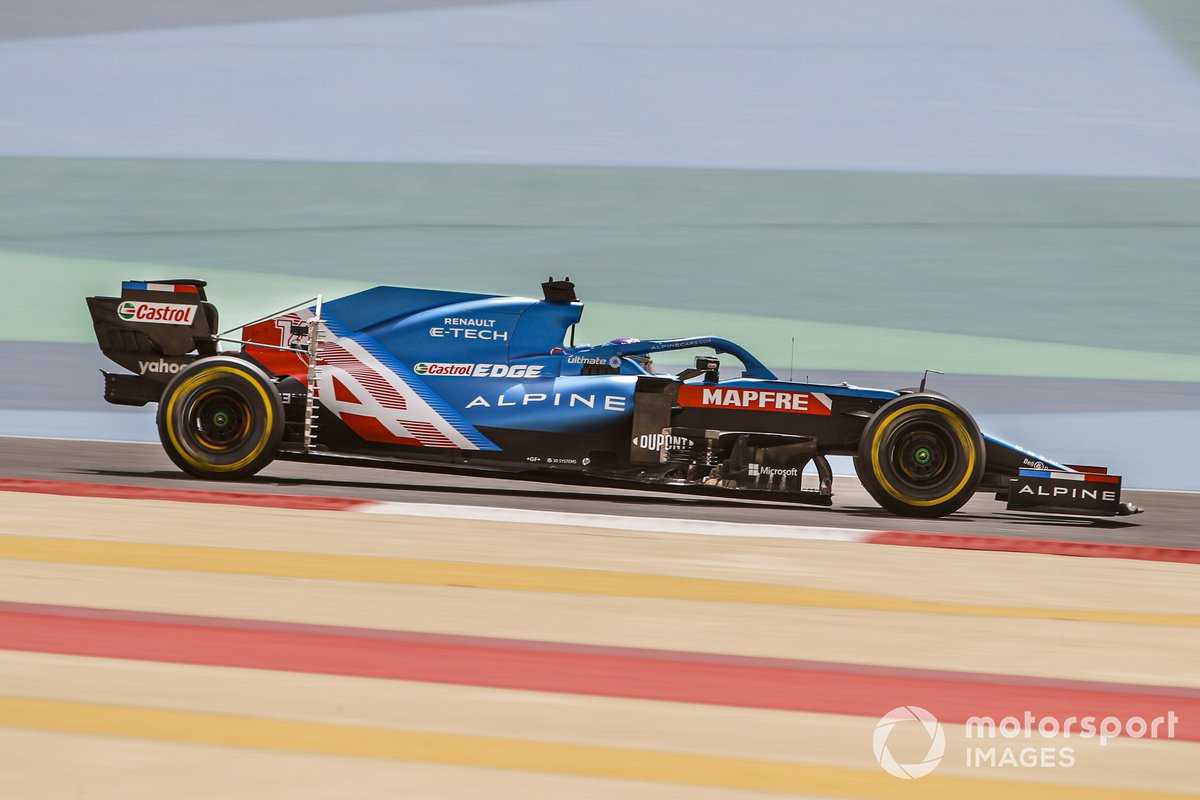 After the mid-session red flag, Latifi jumped to third, only to be displaced by Sergio Perez. The Mexican took third with a hard tyre lap of 1m32.478s on his first Red Bull appearance.

On soft tyres, Nikita Mazepin was seventh for Haas ahead of Hamilton, whose fastest time was 1.1s slower than Ricciardo.

Aston Martin's Sebastian Vettel was 10th and last after sitting out most of the morning session. In a repeat of Bottas' woes on Friday, the German only managed six laps before encountering a Mercedes gearbox issue on his AMR21.

Aston managed to get Vettel back out shortly before lunch for three more laps, but a second red flag with five minutes to go - for a race control systems test - then brought the session to a close.

The chequered flag marked the halfway point of F1's pre-season test at Sakhir, with testing to resume at 15:00 local time on Saturday ahead of Sunday's final test day.