Daniel Ricciardo reckons he had victory in Formula 1's Italian Grand Prix victory sewn up before Max Verstappen and Lewis Hamilton crashed out of the race.

The Australian scored McLaren's first triumph since 2012 with a surprise win at Monza, as he led home team-mate Lando Norris.

Key to his success was getting past pole position man Max Verstappen on the run down to the first chicane on the opening lap, and then holding his advantage in the early stages.

And while he was concerned about losing his lead during the critical pitstop phase, especially as he was at risk from an undercut, Ricciardo said the moments after his tyre changes were when he knew the win was his.

Reflecting on managing the gap to Verstappen up until the pitstops, Ricciardo said only a late dive from his Red Bull rival was going to cause him any trouble.

"There were some laps where he pushed up closer, but I never really had to properly defend," explained Ricciardo.

"He was there but I knew if I didn't make a mistake it was going to be hard for him to [pass], unless he kind of sent a little bit of a Hail Mary.

"I think where I felt I was a little vulnerable was at the end of that stint, where the tyres were going off. But I believe the others were suffering as well. So in my head I was thinking we were going to be vulnerable in that moment.

"I pitted, and I think everyone else pitted as well, so I think we were all struggling at the same moment. And it was then, when we came back out in the lead, then I was like 'alright, we've got this today', like unless something unfortunate happens we can really win this race.

"I think that's when any last bit of belief you need to top it up came, and you're like 'alright, someone is going to have to take it from me today, because otherwise we're winning this thing'." 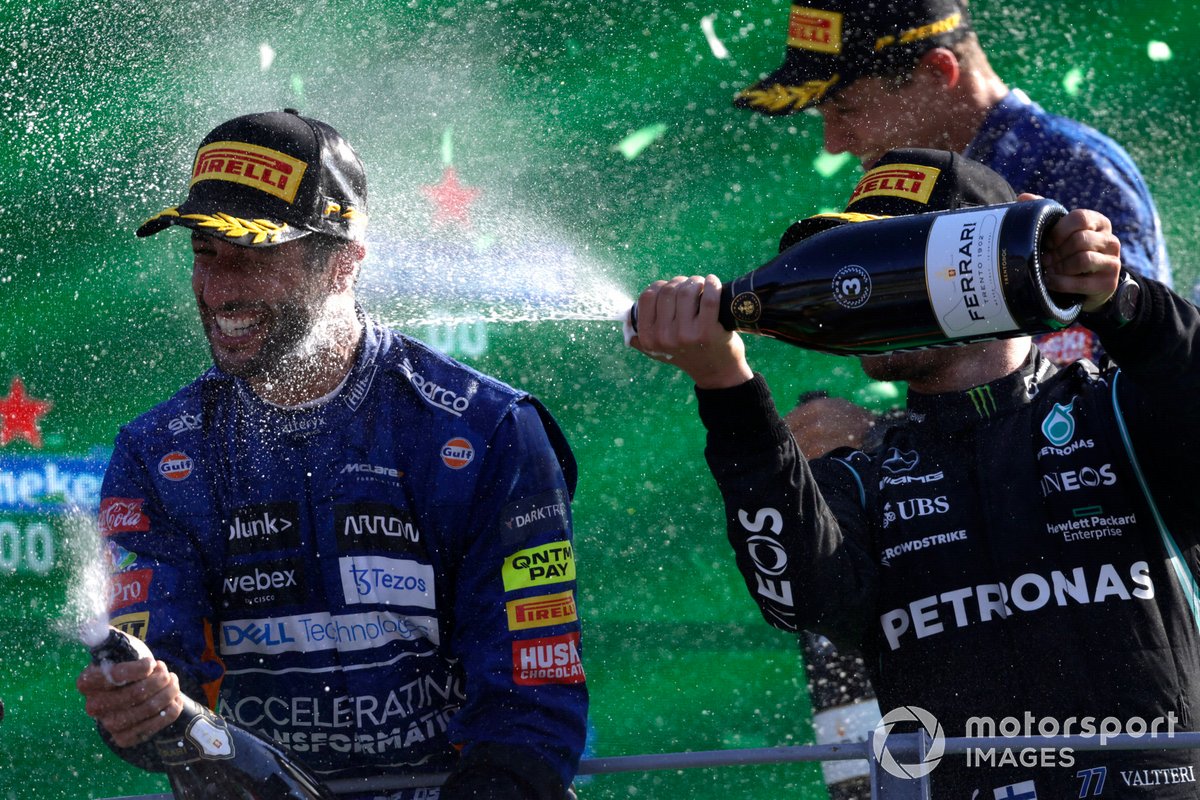 Ricciardo says there is no doubt that McLaren's strength at high speeds played a part in its super strong weekend, but he reckons a degree of "rage" he carried after qualifying also helped him on a personal level.

"I think this circuit seems to suit the McLaren well," he said. "It did last year. I wasn't driving it last year but I obviously witnessed the result the team had.

"So I knew that we could come into the weekend with some confidence with that alone. Then probably there were two things with me, like just loving the circuit.

"I've always loved this track, it's always been a fun one, it's one that I typically gelled well with, and then that combined with feeling better, you know, with the car, more recently and feeling a bit more comfortable and confident with it.

"Plus, I think with Friday being so close, I don't know, sometimes I just get angry, like the top three was so close and I think my lap was okay. But there's always parts where you're like: 'I could have done better'.

"Sometimes I just flip. I certainly have a bit of rage and, as I said at the time, I think it will be a blessing in disguise. I think I used it to my advantage for the rest of the weekend."