Daniel Ricciardo says he "didn't plan" to launch an overtaking move on Yuki Tsunoda when they clashed during Formula 1's Mexican Grand Prix.

The pair made contact when Ricciardo made a move on the inside of the tight right-hander Turn 6 as they battled for 11th position on the 51st lap.

Tsunoda made it back to the pits, but he was forced to retire due to damage incurred.

Ricciardo was handed a 10-second penalty by the FIA stewards. However, his recovery was helped by him being one of the few drivers to switch to soft tyres for the last part of the race.

Against the odds, he moved up to seventh place by the flag and was far enough ahead of Esteban Ocon that the effect of the penalty was negated.

Ricciardo said he wouldn't take full blame for the earlier incident, suggesting that Tsunoda could have left him more room.

"I've seen a few replays," he said. "I'll take more of the responsibility, but certainly I don't feel it was 100 to zero in terms of my fault. I didn't lock, I stayed on the apex, truth is I didn't actually plan or want to overtake him there.

"I mean I'd love to overtake him, I wasn't set into that corner to like outbrake him and overtake him. I just thought if I stay there… It's nothing that you probably don't know, but all the grip's on the inside of that corner. It's very dusty.

"I thought if I could just stay there, keep him a bit on the dirty line, I'll get a better exit. Look, we probably needed to give each other 20-30 more centimetres and we're fine. Probably not even that.

"I wish it didn't happen, and I'm sorry that it happened, but I think 10 seconds was more than enough, and somehow we kind of still came through." 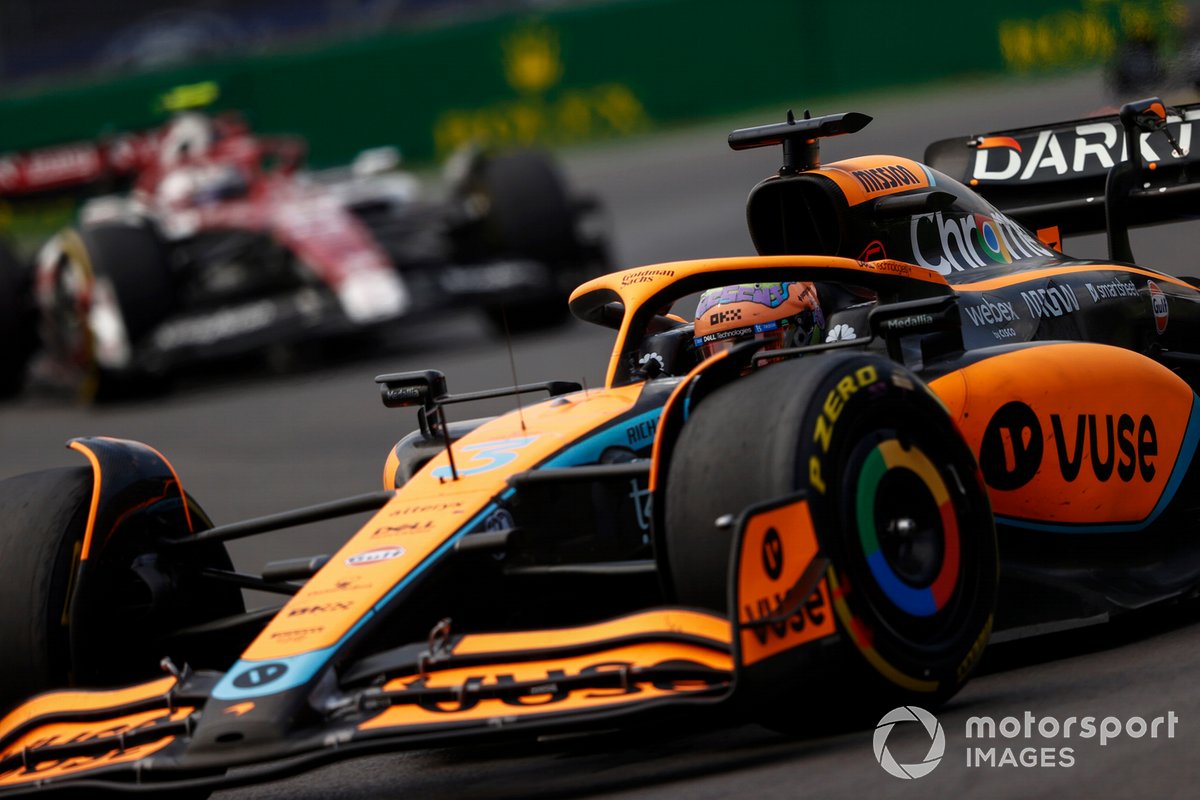 Ricciardo admitted that he expected a penalty: "I figured they probably had to do something. But also it's so hard when you're in the heat of battle, but I didn't remember locking. With Carlos [Sainz] in Imola Turn 1, when I went off the apex and slid into him. It didn't feel like that.

"I was going to come on the radio and vent a little, but I just chose to say nothing. I went pretty dark and then just decided to keep pushing and try to make up for it."

Ricciardo said he felt really comfortable once he was on the soft tyre.

"At that point, I didn't really care," he said. "Because I didn't have that much to lose, and as soon as I got out the pits the tyre was like so much better. I could lean on it, and I felt like I was in control.

"I was like, let's just use this tyre, see what it's got. And then it stayed relatively consistent. So I kind of pushed really hard, then just tried to manage it, and it was still giving me a lot more pace."

Ricciardo also revealed that George Russell might have cost him a position by dropping him within 10 seconds of the pursuing Ocon, but a late pitstop by the Mercedes driver saved him.

"The last few laps I was pretty nervous because George was so close to getting a blue flag for me. And I knew I would lose a couple of seconds with that.

"And that would have dropped me back into Ocon. So I was pushing like hell just to try and hold that two-second gap. And then when I heard he pitted for fastest lap - he probably doesn't think it or know it, but I'll buy him a beer anyways"

10 things we learned from the 2022 Mexican Grand Prix