The updates were planned after Red Bull's Daniel Ricciardo experienced a similar issue at Shanghai in April, but have only now come on stream.

The turbo was not changed as part of Renault's major upgrade package last month, so Hulkenberg's Austria turbo was of the same spec as the one that failed in China on Ricciardo's car.

"It's a new engine but there was nothing different on that [turbo] spec over previous spec," Renault F1 chief Cyril Abiteboul told Autosport.

"However, we have a little bit of a containing measure that will be introduced in Silverstone as planned, and was not available [in Austria].

"We know that we had that risk, after the failure we experienced on Daniel's car in Shanghai.

"This was the only problem that we've had since Shanghai. Nico's turbo is definitely dead, but the ICE [internal combustion engine] and the other components should be OK."

Although Hulkenberg will have to take his third turbo of the season at Silverstone, Abiteboul said Renault is still on schedule. 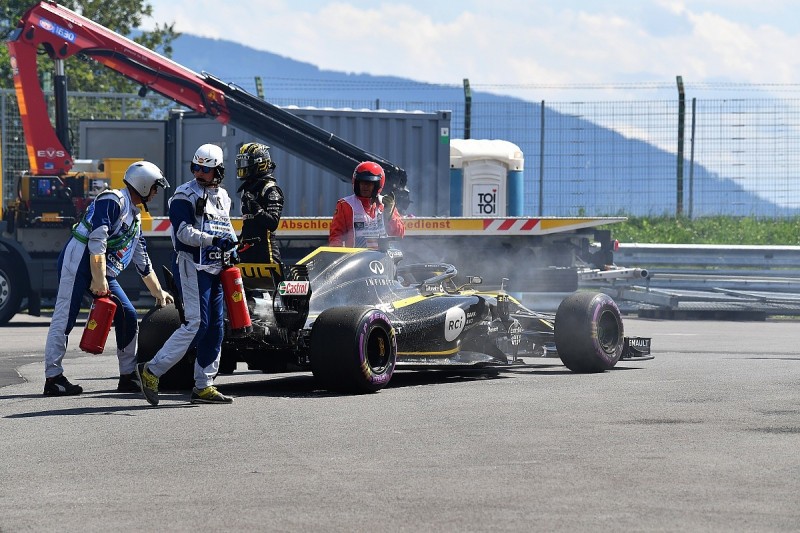 "We were on a plan of using four engines, to keep on with the development pace, and in particular the introduction of the C-spec, so that does give us some latitude for this type of situation," he explained.

"But it is not a situation that is anyway acceptable, and we have to keep on working on that type of reliability.

"There's no penalty for the time being, we were anticipating penalties after the [summer] shutdown, which is still the plan."

Abiteboul was satisfied with the performance of Renault's new MGU-K in Austria, which was only used by the works cars.

Packaging issues meant that McLaren opted for fresh versions of the old spec, while Red Bull is on the bubble for penalties with both drivers and in no rush to make a change.

"No particular issue with it," said Abiteboul of the MGU-K.

"Our car was lighter, so we could achieve a car to the limit, and also a better weight distribution, which is a double positive impact.

"So far the other two cars have preferred not to take that option, because it requires you to change some stuff on the installation side.

"Both teams have elected not to use it for the time being. It doesn't mean that they will not use it later in the season."

Abiteboul also downplayed the introduction of new qualifying modes in Austria, suggesting that Renault would not have made a fuss about the change had the media not been told about it by Christian Horner.

"The qualifying mode is something that we wouldn't have advertised if someone else hadn't mentioned it," he said.

"It's a development that is not turning around the world, it's a small improvement, among the many we are doing.

"In normal conditions we would keep that for ourselves in terms of communication, we would not create expectations."

How Haas uncovered the real Magnussen