Nico Hulkenberg's sixth-placed finish in the recent British GP cemented Renault's status as F1's leading midfield outfit in the points standings, but the team has struggled to match main rival Haas for pace since the American team took the latest Ferrari engine and introduced an aerodynamic update of its own to its car in Canada last month.

Renault chassis technical director Nick Chester is hopeful his team's latest update will improve the car and says it is focused on medium and high-speed corners in particular.

"It will look a bit different in the cone area and flap area," Chester said.

"It's just got a slightly different characteristic, so it will change the bias a little bit between corner entry and in the medium-speed versus high-speed corners.

"It's an interesting test for us. Hopefully it will bring a bit of performance to the car, but often when you're changing front wing characteristics, you can't be exactly sure until you test it."

Chester also suggested this would "probably" be Renault's last major front wing update before it switches focus to the new aerodynamic regulations being introduced for 2019.

"Just because of the lead time," he added. "Say we wanted to do another front wing in the tunnel, by the time we've developed it and spent time designing it, building it, it would be very late in the year.

"There may be some more tweaks to it, but probably tweaks rather than [another] brand new front wing." 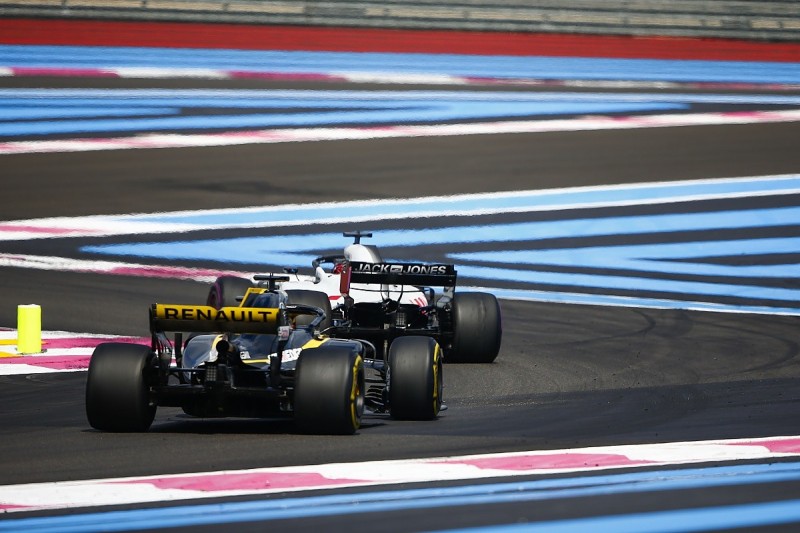 Carlos Sainz Jr says the aim of the update is to close the gap to Mercedes, Ferrari and Red Bull, rather than simply striking back in the battle with Haas.

"We have a few things coming that should make us be closer to Haas, but ultimately to the top three which is still actually our target in a way," he said.

"Haas has been a surprise, but the target of Renault is looking probably that tiny bit more ahead - to that Red Bull and Ferrari, to try and get closer to them."

Team-mate Nico Hulkenberg also reckons the slower circuit layouts of Hockenheim and the Hungaroring should suit Renault better compared to recent races at Paul Ricard, the Red Bull Ring and Silverstone, and help the French team extend its advantage over Haas.

"We still have a good package," he said. "We still have some stuff in the pipeline that will be released over the next few weekends [and] we have tracks coming up that will suit us better than them [Haas].

"These three races, these circuits, really were kind of tailor-made for their car.

"We have a good bunch of people. I think, overall, I see us being a better package, stronger, but we have to obviously prove that and do the job."

Renault heads to Hockenheim 19 points clear of Haas in fourth in the constructors' championship.