Carlos Sainz Jr says Renault will be going "max out" in the Abu Dhabi Grand Prix to overhaul Toro Rosso in the Formula 1 constructors' championship with $6.5million at stake

Renault has a golden chance to overturn a four point deficit to sixth-placed Toro Rosso with Nico Hulkenberg having qualified seventh for the Abu Dhabi Grand Prix on a day when neither Toro Rosso got out of Q1.

Well aware of how important the cash boost could be to Renault for its 2018 preparations, Sainz says the team has been working especially hard for this weekend.

"It is very important," he said about beating his former team Toro Rosso.

"We've set it as a target this weekend, and they've prepared really well this race.

"Back in Enstone there has been a lot of work put into this last race and we want that position and I think we deserve that position. So we will go max out to get it."

Sainz missed out on a spot in Q3 after being slowed on his final Q2 lap by a lack of power out of the final corner, but is hopeful that nothing has broken on his engine.

He thinks Hulkenberg is perfectly placed to score the points required to leapfrog Toro Rosso.

"Hopefully Nico can finish the work tomorrow and finish in P7 because I am convinced that with his P7, that those six points are there," said Sainz, who will start 12th.

"From my side, I want to try to get into the points.

"I don't know how much of an overtake probability we have tomorrow, it will be quite tight, especially because we have a few Mercedes engines ahead of us and we know they are 10km/h quicker.

"But we will try our best both with strategy and with pace to recover it." 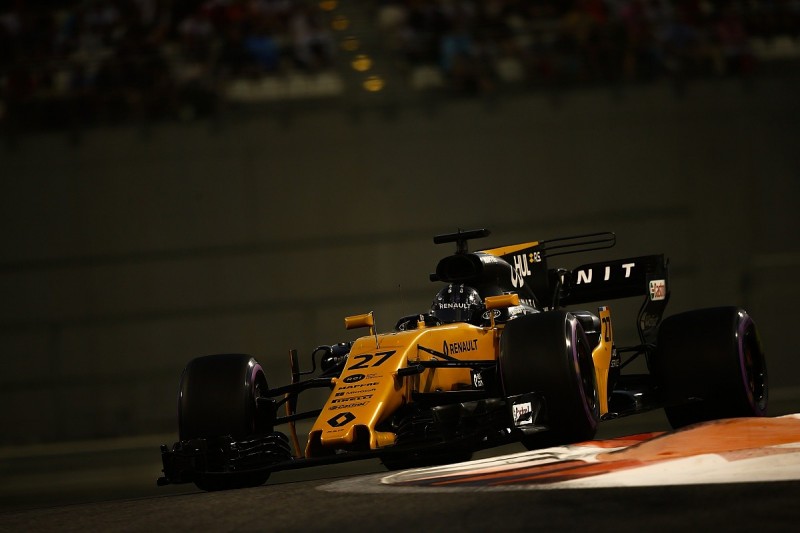 Hulkenberg said he was not too stressed about the delicate constructors' championship situation.

"I want to get the best possible result tomorrow and finish the season with a nice race and a nice result.

"If we get the best out of it, I am sure we can get the other job too."

He reckoned that his qualifying effort in Abu Dhabi was one of the best of his campaign, especially because he had to get through Q2 with a single lap effort.

"I only had one lap, so state of the art again, probably one of my best from the whole year in qualifying again," said the German.

"Generally I am very happy with my record in qualifying.

"I feel this year with these cars I like it a lot more. You can push. You have grip somehow.

"There is more you can work with as a driver, so it is really in favour for me."