Horner has previously stated that his team can take the fight to Mercedes if Renault can get within 3% of the performance of F1's pacesetting engine, and the manufacturer has heavily-revised its power unit concept for this year to make those gains.

"It's a brand new engine this year, a change of philosophy," said Horner. "They've had a big winter.

"We're hoping for a step in performance, and if that's delivered then hopefully we can really be a challenger this year and give Mercedes and Ferrari a hard time.

"Mercedes, they're the triple world champions, the team to beat.

"They set the bar pretty high. That's what we're aspiring to.

"The driver line-up we have is fantastic, we've had great stability in the team, and we're excited about the year ahead." 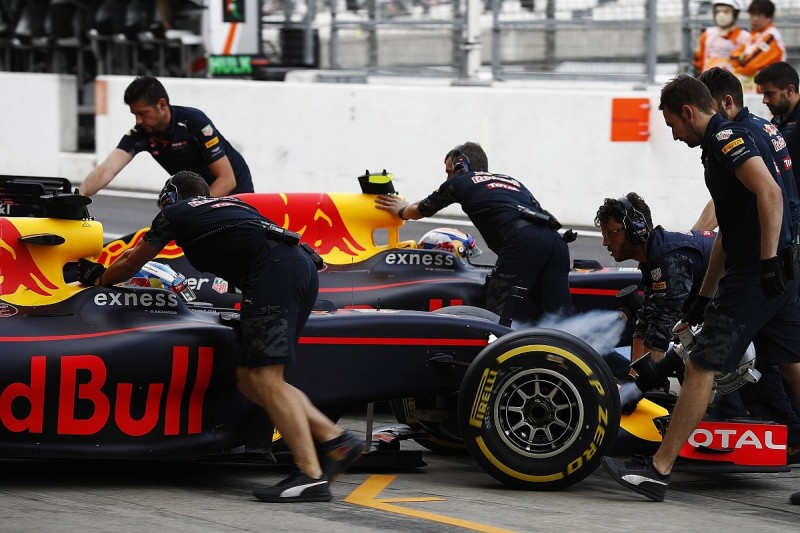 Red Bull is well-known for pushing its lead times on new car builds to the limit ahead of testing, but Horner is satisfied with how things are shaping up ahead of the car hitting the track at Barcelona next week.

"Any off season always has its moments and pressures and demands," he added.

"We're like a swan on the surface, paddling furiously underneath, but that's the same as any pre-season. We're pretty much on target.

"It's always an anxious moment before the car runs for the first time, for it to drive out of the garage and down the pitlane.

"The first thing that you want to see is that it comes back at the end of the lap! It's an exciting moment to see the car break cover.

"You've got to focus on your own programme, put your blinkers on, get through your work, the developments that you want to look at.

"It's all going to change by the time you get to Melbourne anyway.

"It's interesting to see the buzz and tension that surrounds those tests, but we've become pretty good here over the last few winters at just focusing on ourselves and our own programme."