It currently uses an MGU-K produced in association with Italian company Magneti Marelli, with a bespoke Renault Sport design supposed to be introduced at the start of last season.

This was postponed because of reliability problems and Renault is still yet to hit the required distance on the dyno, between 8000km and 10,000km, to be satisfied the new component can last the season.

"It's clear we have to work on the weight and this is one solution," Renault Sport engine technical director Remi Taffin told Autosport.

"That's why we did not rush into running that solution.

"There is no clear target of when. I would more say when it's ready we will get into it.

"It's reliability, it's being able to get that MGU-K running for what we need to run through."

Renault's new MGU-K ran on track during testing last year, so the component works, but it is missing what Taffin calls "the last bit of proving".

The MGU-K harvests energy under braking and deploys the electrical power, which means a very demanding duty cycle, and is fundamental to the performance of the whole ERS package. 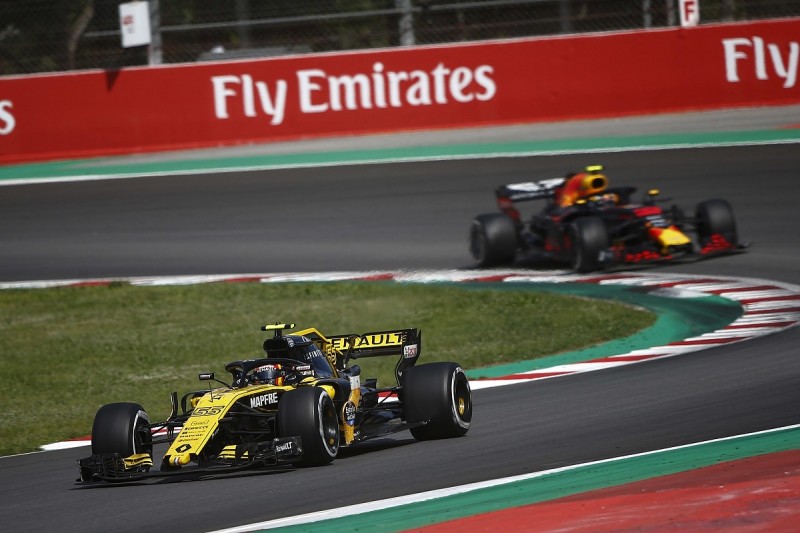 While the exact weight of Renault's new part is unknown, Taffin said the imperative behind running the new MGU-K, which according to the regulations must be no less than 7kg, is the weight.

Renault is presently using an MGU-K believed to be several kilogrammes heavier than the new version.

It is planning its first major engine upgrade for the Canadian Grand Prix, which is race seven of 21 this season, but the MGU-K is likely to be introduced separately to that.

Last season the GP weekend mileage completed from Canada onwards was around 10,000km, which would already take the MGU-K to the upper limit it has struggled to make in testing, and this year's calendar features an extra race during that run.

"It does [impact] on whether we would introduce it," Taffin said of the reliability consideration.

"If we introduce it at race seven it's not going to do 13 races, so we would have to get number three and a penalty."

Renault F1 boss Cyril Abiteboul has already declared that the anticipated gains for its 2018 engine will outstrip Renault's current deficit to Ferrari and Mercedes.

The current engine still has "margin" to its maximum performance levels and Taffin said Renault still believes it can find "half a second" with its engine this year.

"The target is to be at least at the level of the best by the time we get into next year.

"It's a matter of trying to introduce the performance through that year, and trying also, if possible, to get some 2019 stuff in '18."

Daniel Ricciardo suggests F1 should use hypersoft tyre at every GP