Red Bull Formula 1 boss Christian Horner believes the team's 1-2 finish at Imola in April was "psychologically a big thing" in its fight against Ferrari for the championship.

Ferrari forged an early lead in both championships as Charles Leclerc won two of the opening three races, taking victory in Bahrain and Australia.

Max Verstappen failed to finish both races due to a fuel pump issue, while Red Bull teammate Sergio Perez also retired in Bahrain with the same problem.

This left Ferrari already facing questions about implementing team orders to help Leclerc's title bid ahead of the Emilia Romagna Grand Prix at Imola, round four of the season.

But Red Bull answered back in some fashion on Ferrari's home turf as Verstappen beat Leclerc to win the sprint race before controlling proceedings in a wet-dry race on Sunday, leading home Perez for a 1-2.

The result would set the tone for the rest of Red Bull's season, which saw the team capture both titles for the first time since 2013, winning 17 races as Verstappen clinched his second drivers' crown with four rounds to spare.

Reflecting on the battle with Ferrari, Red Bull chief Horner said he felt the Italian team "had a faster car than us in the early part of the season", but that Imola was an important turning point.

"I think that we were able to stay in touch, and that was very important," he said.

"Our championship was 21 races because we missed the first one by having a double DNF. We had to stick with them. 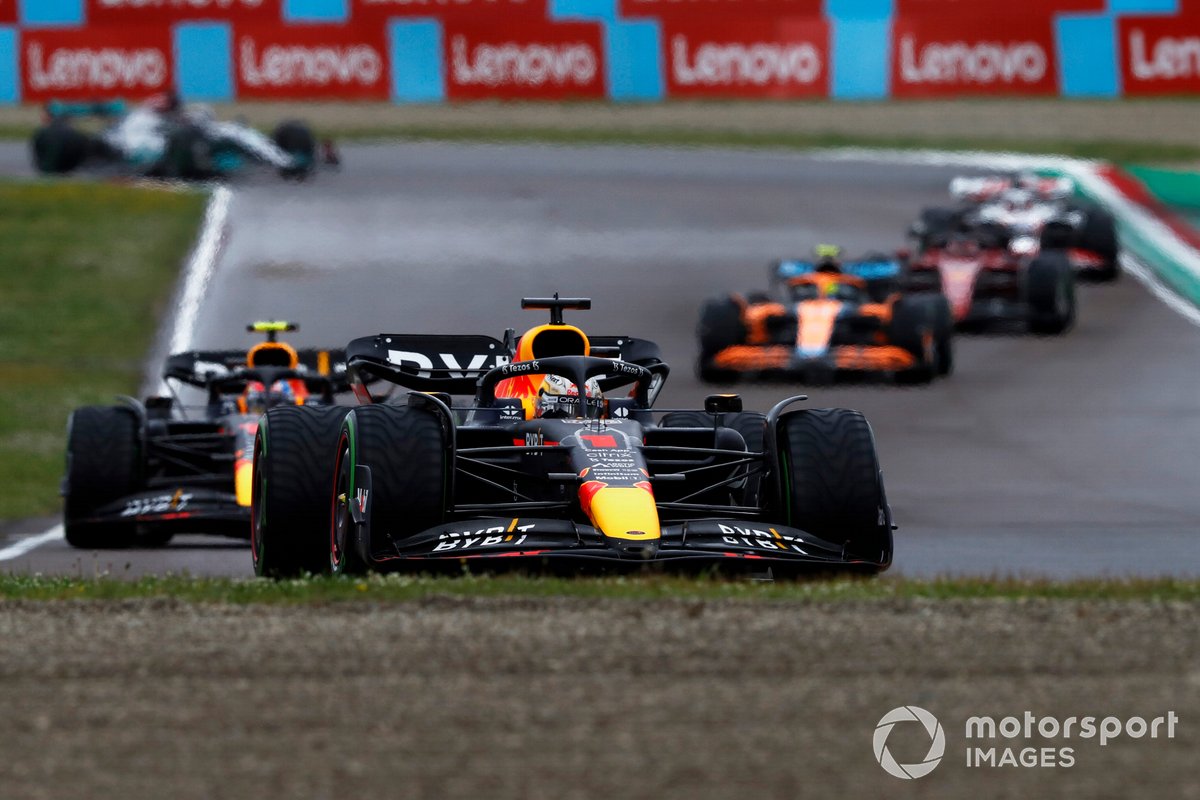 "For me, one of the crucial weekends was Imola with the sprint race and then the victory. To win both those races, to achieve the 1-2 finish and beat Ferrari on their home ground was psychologically a big thing for us as a team, potentially for them as well.

"We developed the car, improved the car and lost a little bit of weight - well, the car did! And then the speed came. These guys have been just fantastic this year."

Imola started a sequence of six straight wins for Red Bull, only ending with Carlos Sainz's victory for Ferrari at the British Grand Prix in early July, by which point Verstappen had forged a 43-point buffer over Leclerc in the standings.

Verstappen picked Imola as being a moment he started to think the championship was possible, believing the response after his retirement in Australia was crucial.

"The way we bounced back after a tough weekend in Australia, to then go to Imola, the weekend we had was just incredible," said Verstappen.

"I knew that there was a lot of potential, but I knew at that point we had a lot of ground to catch up. The car since then has been just continuously developed in the right way, and slowly the car got skinnier as well. That was good.

"We've had a lot of incredible weekends as a team since then. Difficult to say which exact moment, but after Imola, I was confident we had a good opportunity [of the title]."