Sebastian Vettel's performance in the Singapore Grand Prix left rivals stunned as he was in a class of his own throughout the race, often lapping two to three seconds quicker than his nearest rivals.

That speed, allied to the 60-point advantage he has over Fernando Alonso in the championship standings, means that he is set to clinch the title well before the final race in Brazil.

Red Bull team principal Christian Horner says that his outfit is determined to avoid a season finale showdown again like last year, where Vettel recovered from a first lap spin to grab the title in Brazil.

"It is not our responsibility to take it to the last race, which hopefully won't happen this year," said Horner, whose team is on course for a fourth consecutive world championship double.

"We have had two bloody close ones that I don't want to go through again.

"After Brazil last year I now have several grey hairs, and Abu Dhabi two years earlier is about as stressful as it gets.

"The important thing for us is winning. We are trying to defend both titles and our job is to try to do that as soon as possible."

Horner admitted, however, that even he was surprised by the extent of Vettel's advantage in Singapore.

"At one point I thought he had found a short cut, because his pace advantage was so significant," he said. 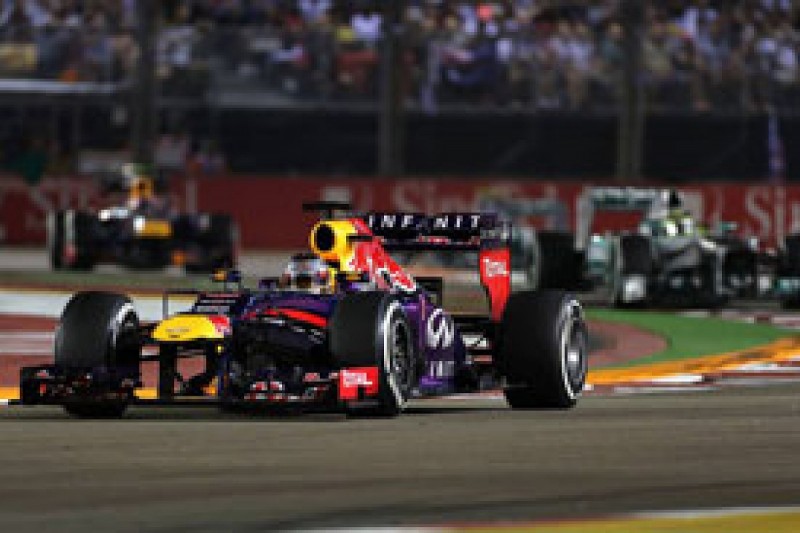 "Of course you have got the benefit of running in clear air, but we saw on Friday that the car was very quick here.

"The only time that we really unleashed him was in the window after the safety car when we said, 'OK, we need to build a gap'.

"But I don't think any of us expected that he would be able to hit 30 seconds in 15 laps or whatever it was that he managed to turn around.

"We have made progress with the car, and Adrian [Newey] and his team are doing an incredible job balancing between the current development and the 2014 challenges.

"The high downforce circuits were not our strong point earlier in the year and it is testimony to the technical team and the hours that are going in that we have come to a maximum downforce track and we have been right on the pace."