Raikkonen set to extend F1 career with Alfa Romeo in 2021

Kimi Raikkonen's Formula 1 career may continue into 2021 with a fresh contract to stay at Alfa Romeo set to be announced in the near future, Autosport has learned

The Finn will break Rubens Barrichello's record of 322 race starts at this weekend's Eifel Grand Prix, and sources have indicated he has taken up an option to remain with Alfa Romeo for 2021.

Confirmation of his plans to remain with the Swiss-based outfit could come as early as Friday.

Raikkonen joined Alfa Romeo at the start of 2019, after his previous Ferrari team elected to replace him with Charles Leclerc.

While Alfa Romeo has not delivered the strong results Raikkonen will have hoped for, the 2007 world champion has still shown himself to be quick enough and motivated.

Last year, his best result was fourth place in the chaotic Brazilian Grand Prix as he helped Alfa Romeo to eighth in the constructors' championship.

This season has been more difficult, with Alfa Romeo hit with the step back in performance from Ferrari's engine performance.

Raikkonen's best result so far was ninth place in the Tuscan GP at Mugello last month. 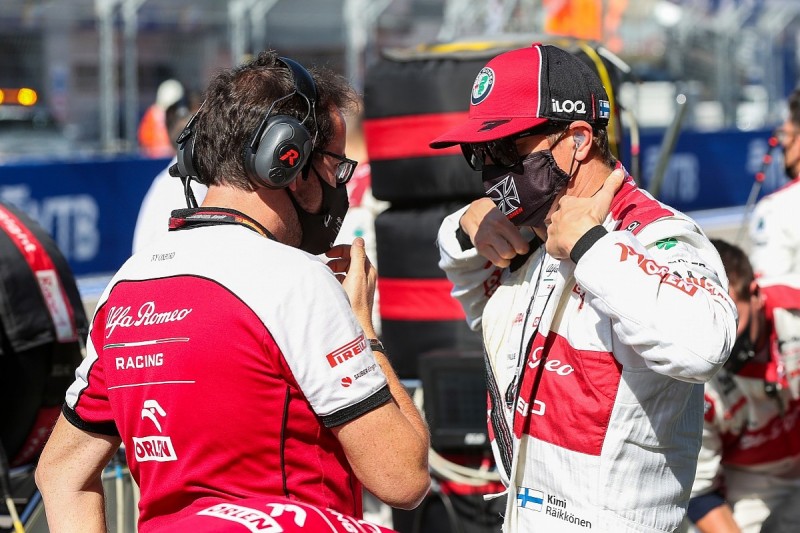 While Raikkonen is all set to stay, it is understood Alfa Romeo has not yet made a final decision on who his team-mate will be, with both Antonio Giovinazzi and Mick Schumacher in the running.

As part of its partnership with Ferrari, the Maranello-based team has the right to place one of its young drivers in an Alfa Romeo cockpit.

It is evaluating whether to stick with Giovinazzi or promote Schumacher from Formula 2.

Schumacher is having his first run in an F1 practice session with Alfa Romeo in Germany this weekend.

Should Ferrari give Giovinazzi a reprieve, another option could be for Schumacher to end up at Haas, which also has close ties to Ferrari.

The American-owned team is considering an all-new driver line-up for next year, and has been linked with one of the Ferrari junior drivers.

It is giving Briton Callum Ilott a run in free practice at the Nurburgring, and Robert Schwartzman will run with either Haas or Alfa Romeo in Abu Dhabi as an evaluation too.

Raikkonen: F1 start record means nothing to me