Kimi Raikkonen says the Alfa Romeo Formula 1 team became aware of a front wing issue in China, but wasn't able to manufacture a replacement for the Baku race

Raikkonen was excluded from Azerbaijan GP qualifying and consigned to a pitlane start after the front wing on his Alfa failed a deflection test, which also forced the team to make a change to the specification of the flap adjuster hook on the front wing.

Speaking to media after the Baku race, Raikkonen revealed Alfa Romeo had already encountered a problem with his front wing in China - where he finished ninth - but couldn't produce a new unit in time for the next grand prix.

"Obviously we didn't plan to start in the pitlane this morning, but that's how it turned out to be," Raikkonen said.

"Honestly I don't know what's happened. There came a message this morning and suddenly it [the front wing] isn't legal.

"Last race the issue that I had in the end of the race, we broke a stay [bracket] on the front wing and we lost the downforce, so probably it's a similar thing that is going on.

"Unfortunately we knew the issue after last race but we didn't have time to produce a new one.

"This is what you get, for sure it doesn't make us faster but this is what it is. Hopefully then it's fair for everybody after."

Despite having to start from the pitlane, Raikkonen recovered to 10th place at the chequered flag, bagging his fourth consecutive points finish with Alfa Romeo since switching from Ferrari for this season. 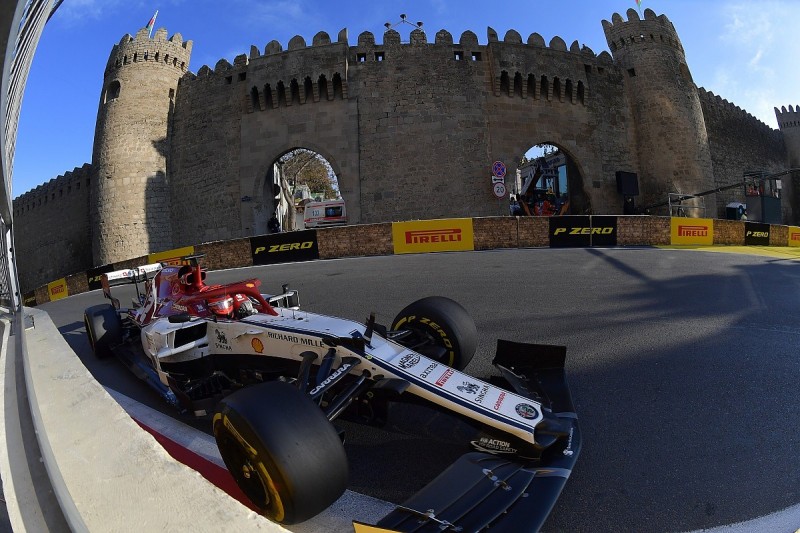 "We got one point, so better than nothing, but [it] was difficult, just not enough grip really," Raikkonen said.

"I don't think we really made the tyres work really well, to get the grip out of them. We did what we could."

The Finn benefitted from the call to ditch the soft tyres just six laps into the race, with the early stop allowing him to get ahead of a number of his midfield rivals.

"The soft were okay," he added.

"We only did few laps, but then obviously when everybody was behind each other [in traffic] we were driving so slow that it's better to stop and jump ahead of them.

"I think we did the right thing and I just tried to get the tyres working.

"We had to save the brakes quite a bit.

"I think one point is the best that we could do today, so we'll take it.

"I think next race [Spanish GP] should be easier for us."

Ferrari's Baku tyre struggles not down to upgrades says Binotto

Video: Five things we learned from the 2019 Azerbaijan Grand Prix