Ferrari, Mercedes and Red Bull are set to be the first teams to run Pirelli's 2017-spec Formula 1 tyres - unveiled in Monaco - when testing begins in August

Pirelli offered a first glimpse of the 2017 tyres when it unveiled a prototype of the rubber on a showcar in the Monaco paddock on Saturday.

The tyres are 25 per cent wider than the current designs overall, with a 60mm increase to 305mm at the front and a 80mm jump to 405mm at the rear.

Pirelli has also adjusted the shape to increase the contact patch and provide more mechanical grip.

The Italian manufacturer has been using pre-2015 cars to do conceptual work on current-sized tyres.

It will run its 2017 prototypes for the first time in August once the teams have supplied a '15 car for modification so it can simulate next year's downforce levels.

Ferrari, Mercedes and Red Bull are in a position to do so but it is not yet clear whether something can be fixed in time for the other two teams that previously offered to assist Pirelli - Williams and Force India - to take part initially.

"The time is the big challenge because we have little time to develop not only the new construction but all the compounds," said Pirelli racing manager Mario Isola.

"We will start soon to test on track with teams that are able to provide 2015 modified car - Ferrari, Mercedes and Red Bull.

"We have already started to make our calculation on models and indoor testing on prototypes."

Isola said Pirelli is working towards five compounds for next season but that could change as development progresses.

"The plan at the moment is to stay with five compounds but we will see what happens with development," he said.

"If the regulation stays as it is with three compounds for each race we have to consider if five is the right number or if we need to increase or not."

Teams received the first model of the 2017 size nearly two months ago, but it was just a simple prototype so they could start making calculations.

The plan is to begin 2017 tyre testing in August with further tests planned for between the Belgian and Italian Grands Prix.

Pirelli is hopeful it can test in Abu Dhabi at the end of the year because it will provide favourable conditions.

It hopes to have the final spec of tyre completed by November. 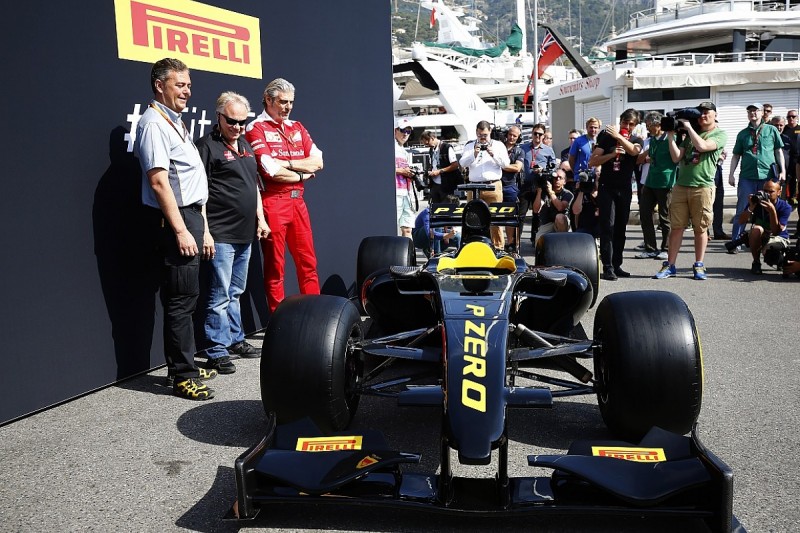