But some F1 teams are still concerned that the vibrations could trigger car failures in the race.

Slow-motion television replays, notably one of Lewis Hamilton's Mercedes, showed a resonance effect as cars accelerated out of the Bus Stop chicane onto the pit straight, with the rear tyres distorting and the whole of the car shaking. The effect was also seen under acceleration out of the La Source hairpin.

Williams chief technical officer Paddy Lowe believes that a rear wing endplate failure on Lance Stroll's car in Q1 was the result of the tyre issue.

Some in the paddock have likened the situation to Austria last year, when kerbs triggered a similar resonance and Nico Rosberg and Daniil Kvyat suffered failures.

Given that the two corners where the phenomenon is happening at Spa precede the high speed run through Eau Rouge, and that even the loss of minor bodywork parts such as flaps could create puncture risks for following cars, some teams have expressed concerns.

Red Bull Racing is conducting ultrasonic crack tests on its suspension on Sunday morning, a process that has to be requested under FIA's parc ferme rules. 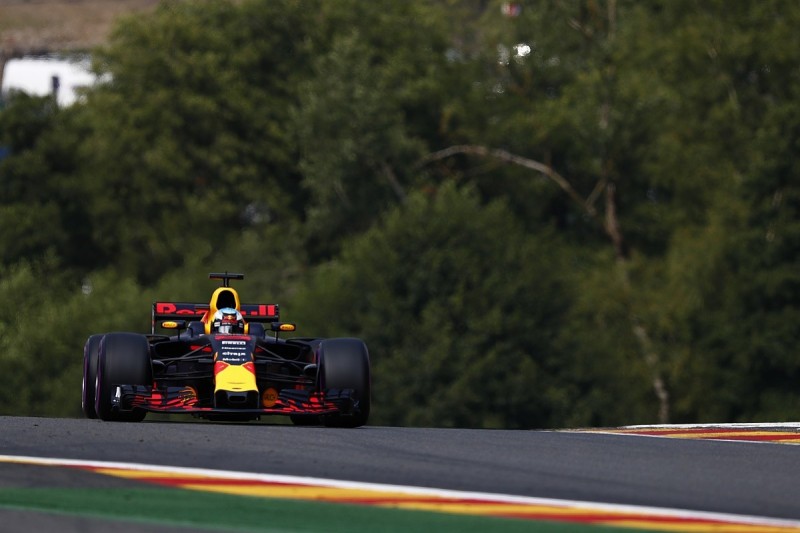 Pirelli's head of car racing Mario Isola said investigations are still ongoing, but following inspection of cut up tyres at Spa and more work back as his firm's Italian base he is confident that the tyres themselves are not at risk of failure.

"In all our investigations on the laboratories the tyres are OK," Isola told Autosport.

"Now we're having a look in the data more in detail on this specific effect.

"What is important to understand how is this effect generated.

"We had the time to speak to the teams last night, but then they had to go, and we had some more information this morning.

"It looks like we have this vibration is just out of Turn 19 [the Bus Stop] and Turn 1 [La Source], so it is a specific point, it's not on all the circuit.

"But because it is the first time we see it so clearly - and maybe also the slow motion images were announcing a little bit this effect - when we see this, we want to understand it.

"We are checking with all the teams, because it's important to have feedback from them.

"Obviously if you touch certain frequencies, then you can generate a failure."

Daniel Ricciardo doubts Ferrari Formula 1 team is interested in him