Sergio Perez has called his penalty for ignoring blue flags during Formula 1's Spanish Grand Prix "unfair", feeling he allowed Lewis Hamilton to lap him at an opportune moment

On his first race back since testing positive for COVID-19, the Racing Point driver was handed a five-second time penalty for ignoring blue flags instructing him to allow race leader Hamilton to lap him, but the Mexican driver has argued his position which ultimately cost him fourth place to team-mate Lance Stroll.

Hamilton, who lapped every driver apart from Max Verstappen and Valtteri Bottas in the race, came up behind Perez around the twisty final sector of the Circuit de Barcelona-Catalunya with the Racing Point driver opting to allow Hamilton to lap him at the start of the next lap on the main straight.

The FIA stewards handed Perez a five-second time penalty during the race which meant Stroll moved ahead of him in the final classification to claim fourth place with Perez pushed back to fifth.

"I don't understand where I should have moved, Hamilton got to me very late in the lap and then in the final sector it is very tight, very narrow, so I don't have anywhere [to go]," Perez told Sky Sports F1.

"It would have been very unsafe for me to do something there but still I got the penalty. I feel it was very unfair but it is how it is.

"I am happy that at least we didn't lose out with the points because Lance got them but I think the penalty was harsh. 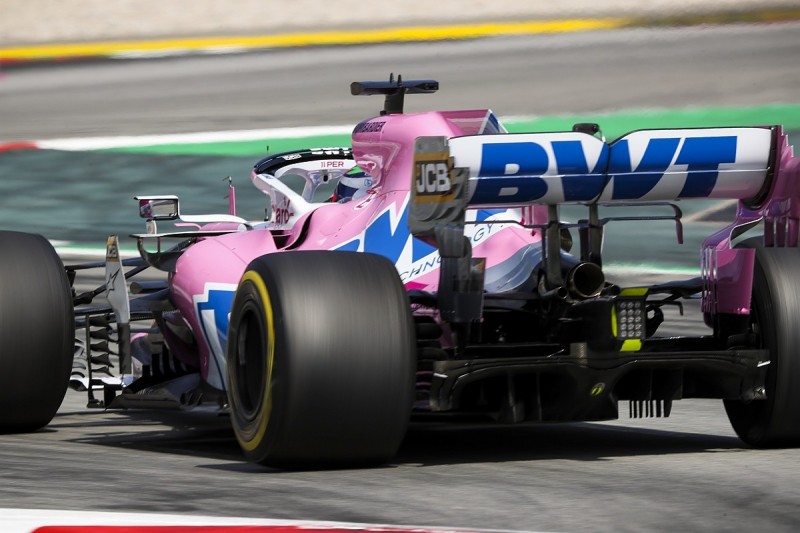 "I got the call out of [Turn] 9, and into [Turn] 10 Lewis was very fast so the first opportunity I thought I had was Turn 1 because the track is very narrow and very tight so it can only go badly.

"So I thought he was only going to lose more time if I give the position there rather than waiting and giving him the position into Turn 1.

"I got the penalty so I don't know if something changed while I was not here but I have seen a lot worse than that and people get away with it."

Despite his penalty, Perez was pleased to see Racing Point move up to third place in the F1 world constructors' standings, even with its 15-point deduction following the penalty levied upon the team by the FIA thanks to the brake duct design case.

The Silverstone-based squad is now one point in front of McLaren in fourth and two points ahead of Ferrari in fifth.

"I think it was for the team and I am very happy with the result we got today as it was a lot of points for the team," Perez said.

"I think they have done a great job with the strategy as well making the one stop work wasn't an issue so I am pleased with that."

Racing Point was once again given a reprimand after the race for its running its controversial brake ducts at the Spanish GP.

The last great BRM that got Stewart off the mark